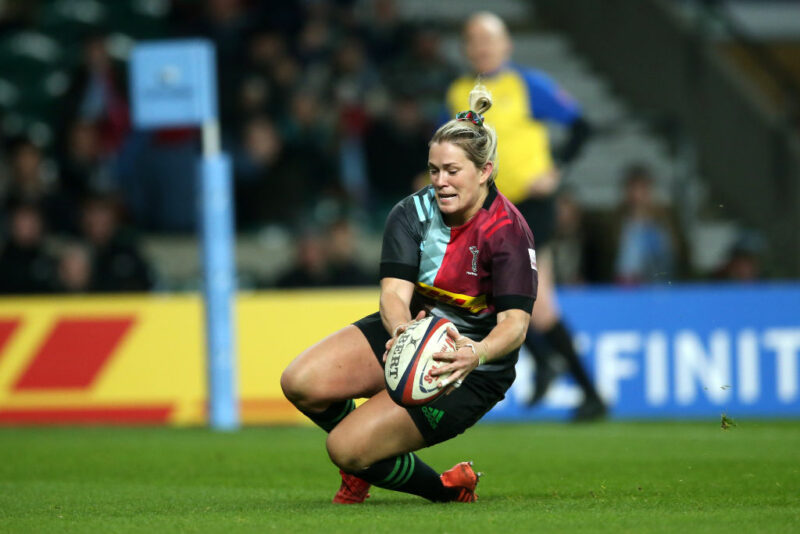 Rachael Burford has commended World Rugby for launching their Coaching Internship Programme that has allowed Red Roses head coach Simon Middleton to bring in Amy Turner to the England fold.

Ahead of next year’s Rugby World Cup in New Zealand, World Rugby will directly fund one female coaching intern to join the senior staff at nations that have qualified for the tournament.

And that has allowed Middleton to promote former Harlequins player-coach Turner to his staff that is without forwards coach Richard Blaze, after his departure to Lee Blackett’s set-up at Wasps.

The opportunity that lays before Turner is testament to the new ground World Rugby general manager for women’s rugby, Katie Sadleir, is trying to forge according to Burford.

“I’ve been fortunate in being on a lot of the discussions at World Rugby, being on the women’s advisory board and rugby committee, and a lot of inspiration comes from Katie Sadleir,” Burford told The Rugby Paper at the launch of Girls Rugby Club. “Her ambition to accelerate the development of women’s rugby is unreal, she wants to take on the whole world with the way thinks to normalise girls and women playing rugby. But also to get women involved off the field in rugby.

“There are so many great women who have played for years and then we have lost them from the sport when really they would make great coaches or referees, S&C coaches, administrators, executives. A lot of my ambition comes from working with people like Katie Sadleir who has this no-limit approach to what women can achieve within the game.

“Seeing more directive from World Rugby with their internship that has allowed Amy Turner to take on a bigger role with the Red Roses is unreal. I played with her at Quins where she was a player-coach and now it’s amazing to see the opportunity she has.”

The Harlequins centre, who lifted the World Cup trophy in 2014 and has been capped 84 times by England, is determined to see rugby be accepted by young girls for its empowerment and not by certain stigmas.

“For years I’ve been doing the Burford Academy and I would name-drop some very high-profile players and some of the young girls just don’t know who they are,” Burford explained. “I would say ‘what do you mean you don’t know Emily Scarratt or Maggie Alphonsi?’ These are people who have given so much to the game and are role models, and it blows my mind that they aren’t well known.

“We want to help grow women’s rugby. We know there lots of issues and so how can we help and support those people, because I don’t think the RFU can solve it all.”