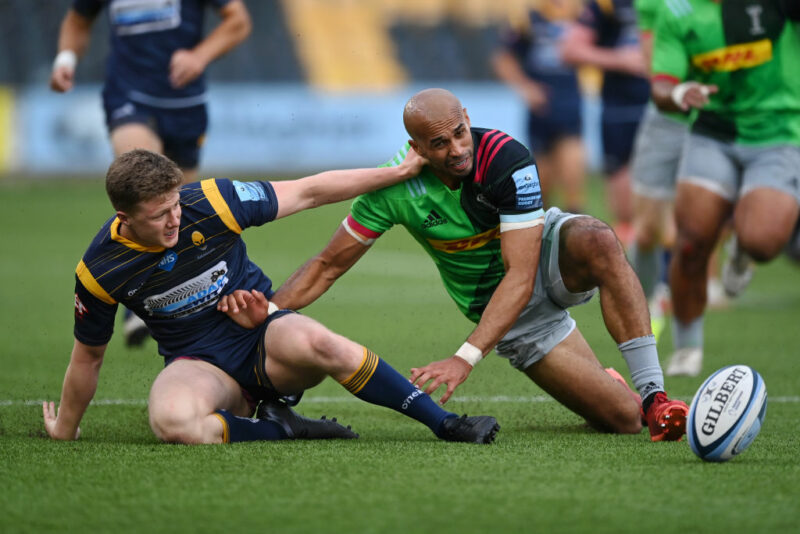 Ten years ago, Noah Heward found himself on a rugby trip back from Devon as a Birmingham & Solihull Bees U9 player, watching Chris Ashton scoring a wonder try for England in a famous 35-18 win over the Wallabies.

Fast-forward a decade to August 2020, and Heward is 19, named in a Worcester Warriors starting line-up to take on Harlequins. His opposite number is the man whose try he can recall from one of his youngest rugby memories.

“It was quite surreal really,” admitted Heward. “My Dad mentioned it to me after the Quins game – it’s weird to think how things have changed over the last ten years when you see names like that up against you!”

Heward is one of a number of youngsters at clubs, in particular Worcester, who have been handed opportunities in the Premiership since rugby’s restart. It’s something for many youngsters that might not have happened, were it not for the enforced rescheduling of games due to the pandemic, but the young Warrior has grabbed his chances with both hands.

It was his defensive capabilities that caught the eye against Bristol, as the youngster made try-saving tackles on Fijian superstar Semi Radradra and England powerhouse Kyle Sinckler. And he agrees he’s not fazed by who he comes up against.

“When the teams are released you notice the names but once you’re on the pitch, you don’t really think about it,” said Heward. “You’ve just got to do your best in that moment because they’re not going to stop and think about you. I was just thinking about doing whatever I could to stop him (Radradra)!”

Former Warriors star and current Welsh wing wizard Josh Adams took to Twitter to hail Heward after his recent performances, describing him as a ‘class player’.

“To receive praise from him is nice, especially considering he’s been so successful at international level recently,” said Heward. “If I can get anywhere near what he’s done, that would be incredible.”

Heward’s rugby journey began at the Bees from the age of four and continued till he was 17. He was picked up by Worcester at a Counties tournament at 13, and has since been a part of their academy set-up, joining the senior academy in 2019.

A spell in National League Two North with Stourbridge was a key part of his development but last December he was given his first outing in the blue and gold of Warriors, where he shone on his debut with a try against Dragons in the European Challenge Cup.

“It was the first time I’d played in front of a big crowd, with almost 7,000 people there,” said Heward. “You could feel the buzz of the crowd which I’d never really experienced before.”

Predominantly a full-back, Heward has been featuring for Warriors on the wing in his recent run of Premiership games, and he insists it’s been a pretty simple transition in the back three.

“The systems we use allows me to bridge between wing and full-back fairly comfortably,” added Heward.

“A lot of the skills in those positions are quite similar and adjustable. Changing positions gives you a better overall outlook on the game because you know what your winger needs from you and vice versa.”

Heward could have taken a different sporting route, having played for Walsall FC academy from 2011-2014.

The Solihull School student faced a tough decision in his teenage years following a series of injuries while playing both sports.

He clarified: “Walsall always encouraged me to play rugby. They thought it’d help physically but they wanted me to start coming out of school to train. I didn’t think it was a good idea so I had to choose between football and rugby. For someone that young it’s a hard decision to make between two things you want to do, but I’m happy I made the decision and it’s working out for now.”

While he doesn’t play football anymore, Heward remains a big fan of Newcastle United, and likens his sporting idol – the football legend Alan Shearer – to a Warriors full-back who is helping him on his quest to become an established Premiership player.

“Growing up, Shearer was my idol – just because of how he differed to many other sports people,” said Heward. “He wasn’t flash. He didn’t do anything out of the ordinary. He just worked really hard, had a good attitude and played for his boyhood club for over ten years. Chris Pennell is very similar in that sense.

“Pens is one of the first people young players go to at Warriors if they have a question, strategically or technically. We had a mentor system going into last season and I was paired with him. If I went out on loan, we’d watch some of my games and watch his Premiership games back too. We’d go through it and he’d ask questions like “What are you thinking here?” or “What are you trying to do here?”. It’s amazing how much knowledge you can pick up so fast from someone who’s played in the Premiership for over ten years. He’s been a massive help for me and other youngsters.”

Heward could well get another opportunity to play this Wednesday, against 2018/19 European and Premiership champions Saracens, and he hopes the experience in this post-lockdown period will stand him in good stead for the 2020/21 campaign.

He added: “I can’t put enough on the value of the experience of the last few games. If I can get more of that in the last couple of matches, that will give me a platform to keep pushing for places next season.”