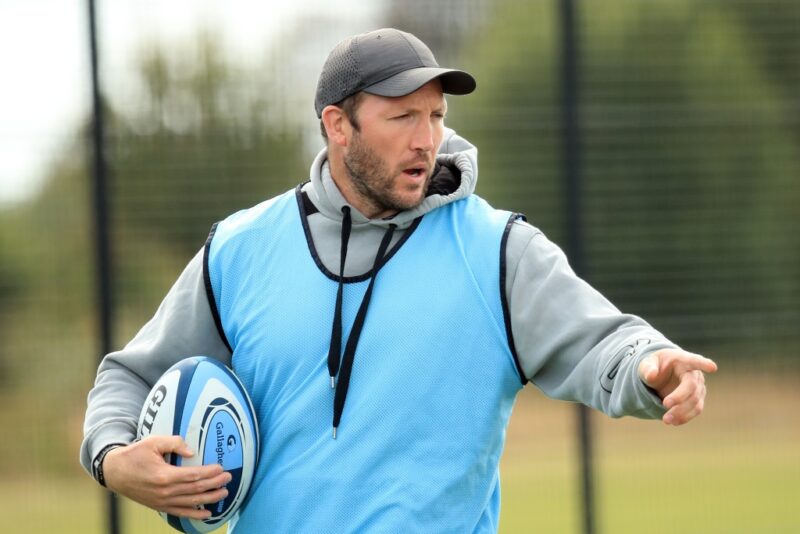 New Gloucester head coach George Skivington will have a total monopoly on first-team matters, according to Lance Bradley.

The Cherry and Whites chief executive has been at the centre of a summerof transition at Kingsholm, with director of rugby and head coach duo David Humphreys and Johan Ackermann both departing.

But in Skivington the Premiership club have a given a young English coach licence to plot the path to success, after the reigns of Laurie Fisher and Ackermann.

“We had a huge number of applications for the head coach job – over 70 – and George fitted the bill better than anyone else,” Bradley explains.

“Let me take you through the process we followed. We talked as a management group about what had gone well in the past, and what had gone less well.

“Our previous two head coaches had been big names from the southern hemisphere (Laurie Fisher and Ackermann), and we’d essentially been playing a Super Rugby-style game. That can work well in certain conditions, but the Premiership isn’t always like that. It rains a lot more here, and the intensity of the Premiership is such that there aren’t any easy games.

“Last season we hardly played in the rain, except for five games after Christmas where we lost them all. There’s probably more to it than that, but we believe it was certainly a factor.

“I then spoke to our senior playing group, and said you’re not getting a vote on this, and I don’t want names, but what sort of profile should the new head coach have? They were clear that it should be a forwards coach with Premiership experience, and that simply reinforced our thinking.

“We built a short-list of about half a dozen candidates – not all of them were from the north, because when a big-name coach expresses interest it’d be silly to exclude them without hearing what they had to say – but when George came to see us he just impressed us hugely.

“He was very down to earth, and presented his analysis of what he thought had, and hadn’t, been working at the club, and what he believed he could do to fix it. It was spot on, and a really succinct summary of what the issues have been.

Bradley continues: “We’ve made clear to George, and to our existing coaches, that the head coach decides what the coaching set-up will be – you wouldn’t expect anyone to join on any other terms. George is completely in charge of the rugby side, and (former Gloucester lock) Alex Brown has moved up to chief operating officer and will handle recruitment, the regulatory issues and so on. We’re also looking at the Academy side of things, and how that can be integrated with the whole of the club, not just the first-team squad.”

Bradley expects there to be more arrivals and departures as Skivington puts his imprint on the club.

“We know where the squad needs strengthening, and that’s something we’ve been talking to George about,” Bradley says. “We’re looking at what options are available, and if we find the right players then we’ll bring them into the club – how soon that happens depends on when players become available. George is drawing up a list of who he’d like us to target, and we’ll try to get them. We’ve been consulting with all of our staff – not just the players – during lockdown, and once we’d finalised what our plans needed to be, we met with the senior player group, and our captain, Willi Heinz, and we’re in the midst of our consultations with the players. I hope that will continue to go smoothly – it seems to have done so far – but it’s a tough situation. We’re all in the same boat, we’re all taking cuts – me included – and it’s not easy.”

When a club loses its head coach, then its director of rugby (David Humphreys), and some high-profile players like Franco Mostert, Franco Marais, and Tom Marshall, it’s no surprise the fans will be restless. Marshall signed a new long-term deal in February, but by June he was gone.

Bradley says: “Johan left for personal reasons – he’d had discussions with Georgia, and we would never stand in the way of any coach pursuing international aspirations.

“In the end he wanted to go to Japan, and it was his decision, made for his own personal reasons. There have been rumours about me interfering in player recruitment but there is nothing in any of that.

“I’ve heard that I was involved in bringing Jonny May back to Kingsholm, and that’s complete rubbish – my first contact with Jonny was an hour after he had signed, when I texted him to say congratulations.

“The thought that any CEO would sign a player without anyone knowing is inconceivable – what player would sign on that basis? Similarly, I’ve heard that a group of players came to me to complain about whatever they’re supposed to have complained about! It’s just made-up nonsense!

“The departure of the two Francos and Tom was down to money – simple as that. They’ve gone to Japan for more than we were able to offer them, and we didn’t part on bad terms – they’ve all sent positive messages to the fans.

“We had conversations with them saying we didn’t want them to go, but we couldn’t afford to pay them what they were previously on.”

COVID-19 has demanded some drastic actions but Bradley has been boosted by the fans’ loyalty.

“We wrote to our members asking them what they would like us to do with the season ticket money should games have to be played behind closed doors, and 85-90 per cent have said they didn’t want refunds – that’s absolutely tremendous and a tribute to our wonderful support.

“It’s been an incredibly tough time for everyone involved in the game. We’ve had to make some people redundant and that’s a horrible thing to have to do but we needed to get the club into the best possible position. It’s dreadful for the individuals concerned, but my responsibility is to make sure we save the jobs of as many of our people as possible.

“However, although we’ve had to do some tough things, we’re actually going to come out of this stronger. We’ve got a new coach, a fresh way of doing things, some new arrivals, a couple of Academy boys that will get promoted, and some players who’ve signed longer-term deals.

“It’s a big hurdle we’ve yet to get over, but once we get the players’ salaries agreed then we’re all bought in to what the club’s trying to do.

“I’ve had players contact me to say that yes, it’s painful, but we’re going to end up with a team that all want to be here and to work together – that’s going to make us stronger as a club.”