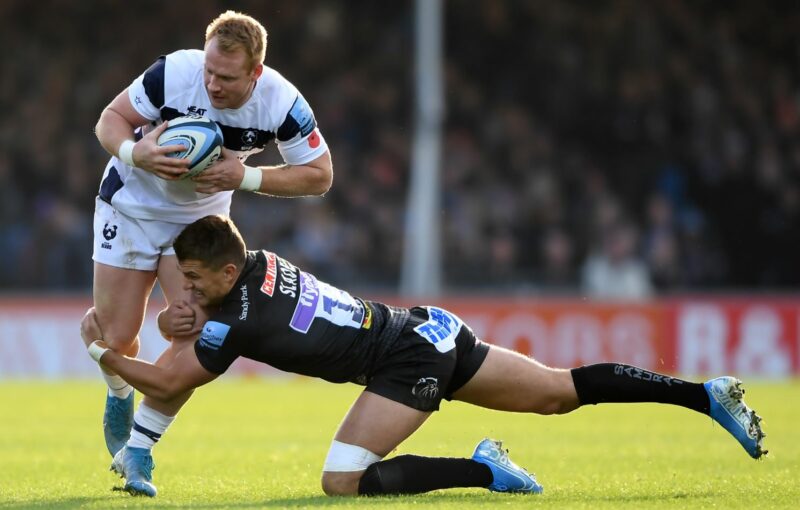 Stroke victim Will Hurrell aims to forge a new career in coaching after revealing how his life might have been in danger had he continued playing for Bristol.

Hurrell, 30, admits to being devastated at having to call time on his playing days after suffering a serious head knock against Leicester in early January – a whiplash-style injury that left him hospitalised, unable to speak, see properly or stand up.

However, with a young daughter to care for and the promise of a long and fulfilling life ahead as he continues towards a full recovery, the former Stourbridge, Coventry and Doncaster centre is adopting a typically bullish approach while plotting a new career.

Recounting the chilling nature of his injury, Hurrell said: “I was pumped-up ahead of the Leicester game and really glad to be starting because I was hoping to put myself back in the picture for Bristol over the rest of a successful season.

“I started pretty well, too, but then I just came off the line to try and melt one of their second rows, he stepped at the last minute and I got my head caught on the wrong side.

“Initially I felt okay but after I came off, I just disintegrated. I couldn’t speak, the sweat was pouring off me and I had a really bad headache. By the time I got to hospital I was throwing up everywhere and I couldn’t remember anything or even walk properly.

“The top right quadrant of my vision was completely gone so I ended up being hospitalised for a couple of days while things settled down. The specialist later described it as a whiplash injury where the back of my brain smashed against the skull.”

Hurrell added: “That had caused a bleed in my main artery which had made me feel funny and after leaving hospital my mum and dad looked after me for a couple of weeks. I was sleeping 12 hours-a-day and couldn’t do much, but happily I felt better.

“I then went through the whole protocol of seeing specialists and having brain scans, but it wasn’t until after the swelling had gone down and I had my second MRI scan a few weeks later that they finally identified that I’d had a stroke. It was something they’d never really seen before as a sports injury but it was obviously not good for my career.

“I saw the neuro-surgeon and after two or three meetings with him he put it to me straight that if I carried on playing rugby and got another whack, I could end up in a wheelchair or potentially die. With a young daughter, that made it an easy decision and with 30-40 years of work ahead of me, the risk-reward of continuing to play was just not there.

“It’s been upsetting having to pack-up but the support I’ve had has been amazing and my phone’s been non-stop with offers of help or jobs. Reading some of the messages has been emotional but I’ve got loads to live for and plenty of stuff in the pipeline.”

Coaching is an avenue Hurrell is keen to explore. He explained: “I’ve done a bit of coaching with the backs at North Bristol RFC and some of the women’s teams and I feel that defensively and around the contact areas I’ve got quite a lot to offer there. I really enjoy watching and analysing different moves and how teams go about defending against them.

“That’s something I’m looking to build on now and I’m also doing a personal training course alongside it so I can gain a better understanding of what a coaching role needs. Hopefully, I could take that into something bigger coaching-wise and I’d also like to do something in mental health.”

As for Bristol’s hopes of bagging a first Premiership title, Hurrell has no doubts.

He added: “There’s a lot more to come from Bristol under Pat Lam, left, he’s a good man. He’s very tough and wants boys to be pushed, but he’s done a really good job and definitely given Bristol a direction that they’d been lacking.”

While Hurrell can no longer make an impact on the field, he believes his journey from the Championship to the Premiership proves the value of England’s second tier – something he feels the elite game must make more of with competitions under review.

“There could be a lot more transference of players and coaches from the Championship to the Premiership and vice-versa, and the transition could be looked at a lot more closely than it is if people would just work together a bit more,” Hurrell says.

“I played for Stourbridge and Coventry before joining Doncaster in the Championship, and from there I remember myself, Michael Heaney (Worcester) and WillGriff John (Sale) all went from Donny straight into the Premiership at the same time. At Bristol, guys like Jake Woolmore are doing well so it shows that with the right coaching, players can succeed.

“It’s difficult for the Championship in terms of funding but if you treated the league as more of an academy and had stronger links with Premiership teams, the pathway could be more integrated. Even if you cut off the Premiership for a while, over time you could expand the Premiership and bring up teams with the ambition to play at the top level.

“Doncaster have got a great stadium and teams like Coventry, Ealing and Cornish Pirates are ambitious, so why not give them a chance? There’s so much talent in the Championship and it’s an opportunity to bring players and clubs through.”