Home / Club Rugby / Harry Mallinder focussed on wearing the No.15 jersey for Northampton

Harry Mallinder focussed on wearing the No.15 jersey for Northampton 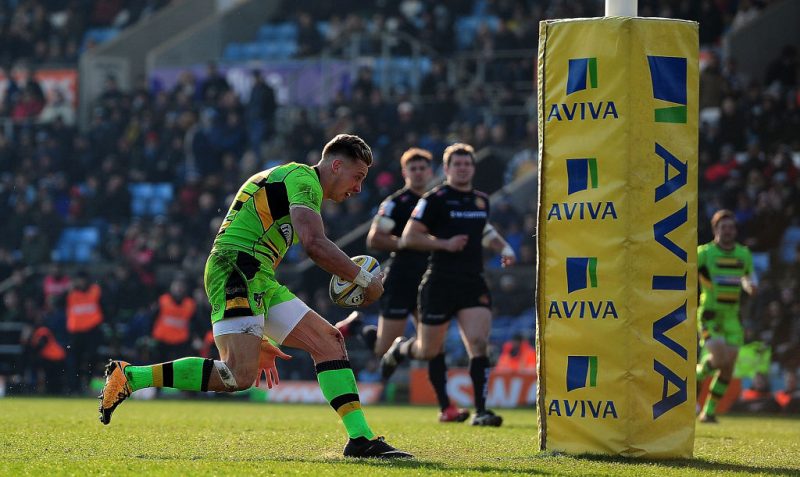 Harry Mallinder is ready to launch a bid to oust Mike Brown and Anthony Watson from England’s starting line-up after declaring his intention to fight for the full-back jersey.

Mallinder, 21, has flitted across the backline during his formative years with Northampton and England U20s but was warned by interim boss Alan Gaffney in January that he must pick a number and stick with it.

A fan of Wallaby Israel Folau, Mallinder told TRP: “I want to be playing at full-back. Although I’ve still to have that conversation with our new head coach, Chris Boyd, I think that’s going to be my position moving forward.

“I think it’s the position where I can best use my skill-set; I like competing in the air, like being able to assess the game from the back, like coming into the game in different positions and being able to run, kick and pass and make decisions with a bit more time.

“You look at Israel Folau and he’s a great player who does loads of bits very well and he’s the one I’d say I’d like to emulate, but everyone playing in the position at the top level is very good at what they do so I’m going to have to work very hard to get there.

“In the England team you have Mike Brown who, with his aggression and leadership, is massive for that team, while Anthony Watson’s an incredible runner. But instead of copying them I’ll just try to be myself and bring my own skills to the game.”

Mallinder’s ambition to cut it at Test level is fuelled by his involvement in England’s Six Nations squad, with June’s tour of South Africa now in his sights.

He explained: “It was a great experience. Having gone on tour to Argentina last year I was disappointed not to get a game there, but to get back involved in training with the group during a proper tournament was brilliant for me.

“It’s disappointing I still haven’t got a cap, hopefully that time will soon come.

“South Africa is definitely in my head and if I can play well for the club over the next few weeks it will put me in a good position to get on that tour.”

A disappointing campaign at Saints saw Mallinder’s father, Jim, fired as rugby director in December.  However, rather than sulking, Mallinder said: “It happened and I’ve just cracked on. My role hasn’t changed, I just want to keep doing my best and it hasn’t affected my relationship with Northampton whatsoever.

“I’ve been at this club for a long time; I’ve grown up with it, been a fan of the club and come through the system in the academy. It’s not changed anything and there’s a lot to look forward to with new coaches and a handful of new players.

“There are four games left and it’s an opportunity to push on.”