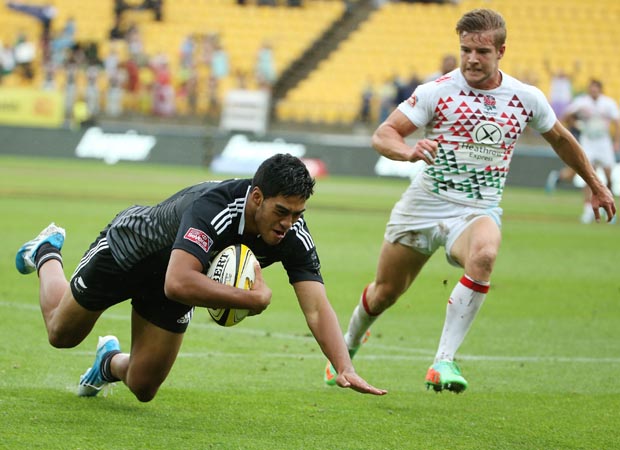 As we return to England with another fourth-place finish there is a now familiar feeling of so close yet so far. But if anything our self-belief has been bolstered.

The lead up to the fifth leg of the series had been comparatively relaxed after the madness of Las Vegas. Wellington is a popular destination among players. Its coffee culture and coastlines make it a place to switch off and loosen the bootlaces. And, when we’re not heading down to the ‘Memphis Belle’ café, a favourite of ours, we’re training in the most picturesque locations ever to see a set of white lines.

Additionally, New Zealand has a complete rugby culture and to be immersed in this as a player is rewarding. This culture is evident on the day of the Sevens parade when people turn out onto the streets to see the teams go by on floats. Office windows are full of waving fans. It’s a small taste of the type of atmosphere that awaits during the event.

That said, there was some talk this year that the tournament felt like a damp squib – and not just because of the torrential weather that persisted during Friday and Saturday. Nevertheless, from our perspective, although the crowds appeared a little more depleted than usual, the noise and excitement were as intense as ever.

The Kiwis know rugby and they know how to party. This combination makes Wellington one of the circuit’s best stops.

Our first two wins against Portugal and an injury-plagued Welsh side set us up nicely for our game against South Africa to decide the group winners. South Africa had not lost in 14 games and everyone was eager to lay down a marker, not just for the tournament but also for the remainder of the season. In our best performance of the season we ran out 19-5 winners.

We talk a lot about not allowing the turmoil of loss or elation of victory take us to the emotional extremes. This was true as we refocused for our first game of Day Two, a quarter-final against Samoa. We managed to recreate some of the quality we’d produced against South Africa to win again. The game was, however, crippled with handling errors which began to characterise the play in the second day rain.

We’d earned the opportunity to play New Zealand in front of their home crowd in the semi-final but sadly failed to take advantage. After conceding tries in the first half, partly down to having two players in the sin bin, we were playing catch-up.

Few teams have been able to come back from behind against New Zealand and this task was made nigh on impossible as they benefited from a tail wind and a greasy surface in the second half.

A 31-0 loss hurt us and this pain was compounded as we lost out in the third place play-off to Fiji when a gruelling, lung busting, leg burning last play resulted in a try for the physical islanders, below.

We are back home now after a 40-hour journey from the Southern Hemisphere.

With so much positive play to build upon, the wait until Tokyo is an agonising one. Another shot at a tournament title awaits and the feeling in camp is that we are getting closer.