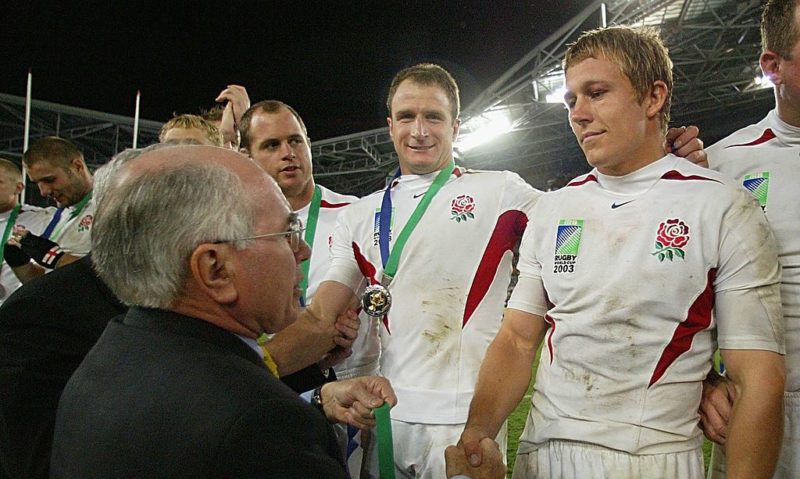 Jonny Wilkinson has revealed his own struggles dealing with hero status in the wake of England’s Rugby World Cup triumph in 2003, citing his concerns for Owen Farrell.

Immortalised by his winning drop-goal in extra-time and welcomed back from Australia by hundreds of thousands of fans, the fly-half reflected on the pressure that came with lifting the Webb Ellis trophy at 24 and his insecurities in not knowing what would follow.

Describing himself as feeling ’empty’ in the aftermath of glory, Wilkinson said he relishes the unknown five years into his retirement rugby than his fears of it in his days playing at 10.

“I love my life but it’s got nothing to do with the content,” Wilkinson told the Daily Mail. “It’s the opposite. When I was part of the World Cup-winning team I had never felt so empty as I did afterwards.

“When we won a couple of championships, at Toulon, I left and there was no sunset waiting for me to stroll into. I found that getting rid of this idea that I was an important person, I could have a brand new world.

Now, current England captain Owen Farrell carries the hopes of Saracens in their Premiership and Champions Cup campaign, before shouldering World Cup expectations in the autumn.

Farrell will turn 28 during the tournament in Japan, and the view of Wilkinson is pressure is something which the best players can utilise to improve themselves.

“If you see yourself as someone who has to get everything right —which I did for a long time — and have to make sure everyone is happy around you, you see a challenge,” he says. “There’s a ridiculous amount of pressure.

“I walked off after the 2003 World Cup thinking I knew how it works and suddenly found myself hating rugby, thinking, “Everyone is against me, there’s so much pressure”. Owen is willing to work on himself, which means he can go out there and be his best.

“Most people would say, “Jeez, he’s got to manage the captaincy”. When do you ever manage captaincy? When you ask a seven-year-old what they want to be they’ll say captain of England.

“They don’t say, “I wouldn’t mind being captain so I can just get through it”.

“Owen wants to be the goal-kicker because he loves it, not because he needs the pressure.”