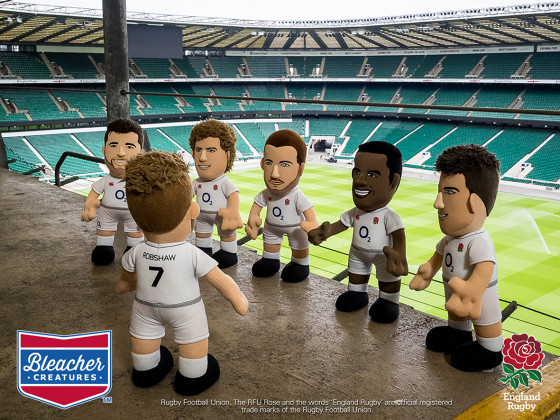 Premier Licensing, one of the leading suppliers of licensed gift and sports accessories in Europe, is delighted to announce that Bleacher Creatures plush figures of the England Rugby team will be available in time for this autumn’s Rugby World Cup.
Bleacher Creatures are uniquely true-to-life plush figures that turn the greatest athletes and entertainment icons into characters, even friends, to hang out with any time, any place.
Aimed at the gift and collectibles market, the plush figures have truly captured the sports fan’s imagination in US. Within three years, an elite roster of athletes across many of the country’s major professional sports has been transformed into Bleacher Creatures plush figures, including stars from Major League Baseball, National Basketball Association, National Hockey League and Major League Soccer. They, in turn, have been joined by assorted heroes and villains of the Big Screen, including Avengers, Spiderman, Antman, Guardians of The Galaxy, Batman, Man of Steel, The Italian Stallion and the Heroes of Middle Earth from The Hobbit films.
Now Bleacher Creatures are here in the UK, with Premier Licensing seeking to replicate that phenomenal US sales success among its 20 licences for major UK football clubs, rugby clubs and associations. And it is to rugby that attention turns first as the Rugby World Cup revisits the UK this autumn for the first time since 1991, when England lost out Australia. Since then, England has gone on to lift the coveted trophy, reversing 1991’s result Down Under in 2003.
Premier Licensing is in partnership with the Rugby Football Union as official licensee for England Rugby, paving the way for Bleacher Creature versions of England Rugby World Cup team members to be ready and waiting for fans to snap up prior to England’s first match against Fiji at Twickenham on September 18th. The range will include captain Chris Robshaw, fly-half George Ford, centre or fly-half Billy Twelvetrees and prop Mako Vunipola.
Kevin Funnell, Director of Premier Licensing, is hoping the new England Rugby range of Bleacher Creatures will inspire the home team to further success over six weeks of glorious rugby from late September until the end of October: “We’re working very hard to bolster the Bleacher Creatures proposition in the UK, and the Rugby World Cup is an ideal opportunity to really bring these fantastic plush figures to the forefront. We believe rugby fans will really take them to heart as they try to cheer the home team to another famous victory this autumn.”
Bleacher Creatures are the perfect way to put your passion to play! For more information on the Bleacher Creatures plush gift/collectibles, please go to www.bleachercreatures.co.uk, contact James Garton on +44 (0)7941 227847 or james@premier-licensing.com.