Tom Mitchell: What happened in Vegas stayed in Vegas so now we can concentrate on Wellington

Posted on 6th February 2014 by admin in Tom Mitchell 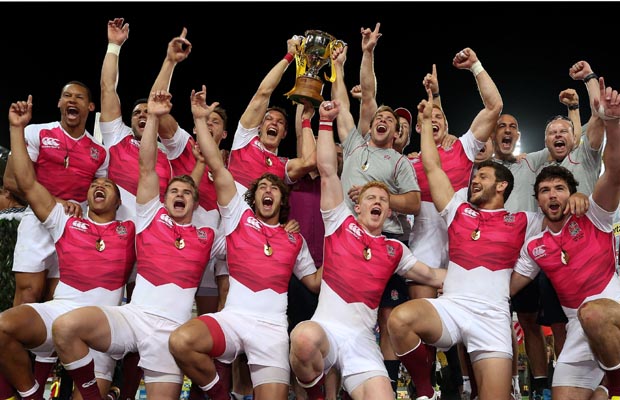 Ten days of temptation is plenty and we’ve battled Sin City for long enough. After three days of intense competition we’ll be happy to leave Las Vegas behind and look for winning ways in Wellington.

A fifth-place finish here in Vegas, secured in a victory over Australia in the Plate final, leaves us fourth in the overall HSBC Sevens World Series standings. While this result falls short of the expectations that we’ve set for ourselves, we have made up ground on third-placed Fiji, now only three points ahead of us.

However, the top two finishers out here at the USA 7s were South Africa and New Zealand who continue to pull away at the top. What proved to be most disappointing was our inability to profit from our quarter-final against New Zealand. Victory would have meant an important points swing in our favour and with it an opportunity to rein in the champions.

Our first game of the tournament against Samoa was set up as a battle of revenge following our loss to them in our opening game in Port Elizabeth. Another reverse in Vegas, our fate sealed with a heart-shattering last-minute try, meant we finished second in the group, leading to our draw against the top seeds for the quarters.

We went down to New Zealand 24-7 in an inaccurate performance. It was symptomatic of a lack of consistency we’ve shown in each of the tournaments this season. This is partly to be expected given the changes that have taken place and the alterations to our tactics and style that we are still trying to embed.

That said, the players are under no illusions that failure to put together back-to-back performances will hurt us. The time to start layering accomplished displays is upon us.

Our ten days in Las Vegas have forced us to keep moving up our learning curve. Performing on the HSBC Sevens World Series is a lot about maintaining bodies and physical fitness but it is more about managing minds. The mental battle in Vegas is unique. With slot machines at every turn and drunken revellers at all hours, keeping focused on the job is tough even for the most disciplined.

It is now time to jump on a plane and make the 40-hour journey to New Zealand. We return to Wellington as champions following last year’s extra time victory against Kenya, and historically England have tended to do well at this tournament. The pressure inside the ‘Cake Tin’ is not to be underestimated and English support is always scarce. In the past, however, we’ve thrived on the abuse (among other things!) hurled from the stands and we don’t expect this year to be any different.

In our group will be Wales, South Africa and Portugal. They say tournaments are never won on the first day but if we have learned from last weekend then we know that sometimes it pays to top the group. The South Africans have not lost in 12 straight games. This statistic alone is enough to whet our appetites.

Each time we finish outside the top four we will be disappointed but what happens in Vegas stays in Vegas. The brilliant thing about the World Sevens Series is that each tournament, despite the result, is an experience to be built on and savoured. We’re looking forward to creating another memorable experience in Wellington.