Shane Williams – Wales are lucky that Boks look in even worse shape!

Posted on 24th November 2016 by admin in Shane Williams 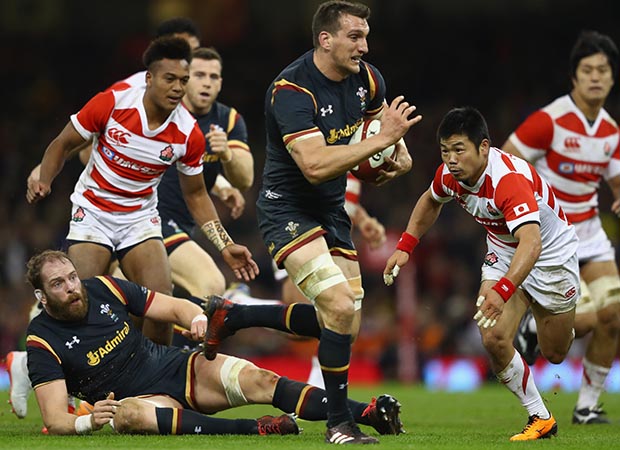 Wales are in serious danger of being left behind by the rest of the Six Nations if they don’t settle on a way of playing.

England and Ireland have clearly taken their game on with victories over New Zealand, Australia and South Africa between them.

Scotland are making real progress with their performances against Australia and South Africa while even Italy have now claimed a big scalp in the Springboks.

So next week’s game against South Africa is now huge for Wales if they are going to show they can keep up with progress elsewhere.

If they win a third game from four – and get that big Southern Hemisphere scalp on their belt – then the autumn could be viewed a success. But they must find the right way to play because at the moment they appear dazed and confused.

What was most concerning is that no-one appeared to understand that the game-plan was not working and that they had to change tactics to get the better of Japan.

Wales were so obsessed with trying to play wide and prove they can take on teams with tempo and width that they forgot to actually look at what is right in front of them. In the first half, Japan hardly committed anyone to the breakdown or rucks which meant they had virtually all 15 players spread across the pitch in a line ready to defend.

Yet every time Wales had the ball, they looked to spin it wide where Japan were happy to defend in numbers. I bet Japan could hardly believe their luck.

If someone in the Wales team had just lifted their heads up, they would have realised there were so few defenders around the rucks that they needed to just pick and drive to cause problems. It may not be the most attractive style of rugby but surely winning is what counts?

New Zealand don’t play the most thrilling brand of rugby but they do the simple things right and – more importantly – sense where the opposition’s weaknesses are.

When Wales kept it tight, this game looked like a mis-match given the difference between the two packs. But Wales were hell-bent on sticking to the game-plan of going wide at every chance and trying to run Japan off the pitch.

But the simple truth was that they couldn’t and in the end, they simply played into Japan’s hands.

We were flat, players were taking the ball standing still and there were a lack of options.

The players have to take some responsibility for that. They have to recognise where they have the upper hand on opposition and go for it.

Yet in the second half, they just kept playing exactly the same way and it was loose passes or knock-ons that gifted Japan all three tries. We were lucky to win.

As relieved as we all were with the win and the coolness of Sam Davies, no-one could deny Japan deserved at least a draw, if not the win. With ball in hand, they were by far the better team.

They had dangerous runners, had decoy runners moving in good lines, and just looked so much more comfortable in possession than Wales.

It does not bode well for Wales next week but they only saving grace is that South Africa appear to be in an even worse shape.

They had a poor Rugby Championship, were blown away by England last week and lost to an Italy side that conceded 60 points to New Zealand the previous week

With all due respect to Italy, that shows how far the Boks have slipped behind their great rivals.

If Wales were playing well, I would back them to beat South Africa next week with ease.

But on this form, it could be about who makes the fewer mistakes.