Posted on 24th March 2016 by admin in Peter Jackson 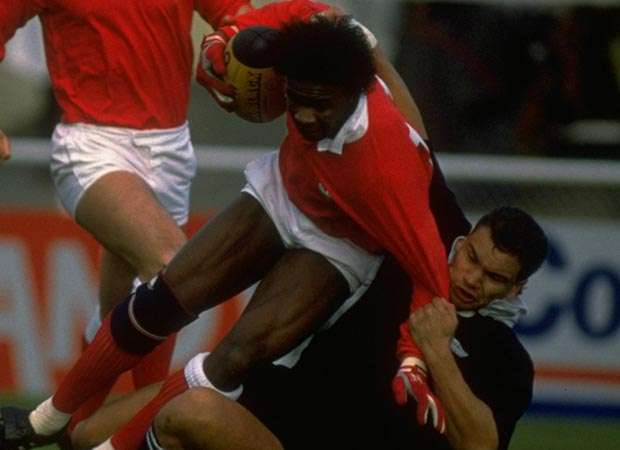 Glen Webbe was the first black British player to appear in the World Cup and the first of any colour to score a hat-trick of tries.

He did so against Tonga in Palmerston North at the start of the inaugural tournament in 1987, a time long before anyone had coined the phrase ‘political correctness’. Webbe made no fuss that day in New Zealand, just as he made no fuss when they refused to serve him at a restaurant in Pretoria during apartheid South Africa.

He took it all in his stride with a shrug and a smile. No matter what they threw at him, Webbe kept his dignity as a human being which took some doing during the unenlightened Eighties.

In a week when all manner of fury broke out over an English prop’s oafish sneer at his Welsh opponent as a ‘gypsy boy’, when the WRU got their knickers in such a twist that England coach Eddie Jones poked some fun at their expense, Webbe spoke of a very different attitude to his experience of racist abuse.

The Union issued a statement expressing their ‘surprise’ at Marler escaping punishment. In so doing they contradicted their No.1 employee, Warren Gatland who, in accepting it as ‘banter,’ also struck a telling note about ‘people getting so pc and making massive issues’.

Webbe would agree with him, wholeheartedly. The former Test wing’s views on the subject carry real meaning given what happened when he lined up on the wing for Bridgend in a Welsh Cup tie at local rivals Maesteg.

“There was a stoppage while one of our players was getting some treatment,’’ he said. “I was out on the touchline close to the crowd. They starting chanting ‘Webby, Webby’, trying to get a rise out of me. I ignored them.

“Then one bloke called out: ‘Gleno’.  I turned round and saw a banana flying through the air.  It landed at my feet. I could have taken offence and reacted differently but I had a giggle instead.

“I peeled the banana, took a bite and threw it back in the general direction of whoever threw it at me. The crowd had a good laugh and I could hear a lot of them saying: ‘Well done, Webby’.

“I thought it was very funny that someone went to the match that day saying to himself: ‘I’ll buy a banana on the way, take it to the game and throw it at Glen Webbe. But I’ll have to wait for him to get close enough so he’s within throwing distance’.

“When I was growing up, we were the only black family in that particular part of Cardiff. So I’d always be in a minority and I learnt to use humour as a defence mechanism.’’

Imagine the outcry had someone made a similarly insulting gesture at Twickenham last week to England’s Anglo-Nigerian second row discovery, Maro Itoje. Instead Joe Marler found himself in the eye of the storm for his crass reference to Welsh tighthead Samson Lee’s pride in his background as a traveller.

“All of a sudden the PC warriors came out in force,’’ said Webbe, director of the Cardiff Kitchen Warehouse company.   “They seemed to be more offended than the recipient of the abuse. I really think we are losing the plot.

“Somebody says that somebody said something and they want blood for such a trivial thing. The game is sanitised enough as it is. In my time, it was a case of sticks and stones but words will never hurt you.

“Nobody should ever feel threatened or intimidated. Back in the day, things were said and done in the heat of the match and they were all part of the game. Nowadays, they would be treated as an offence.

Webbe, whose 250-plus tries in 404 matches for Bridgend gave him a strike rate second to none, cites a recent furore over Liam Williams as an example. In December 2014 the Wales full-back found himself at the centre of a social media storm for blackening his face, wearing a black wig and going to a fancy-dress party as Wilfried Bony, before his transfer from Swansea to Manchester City.

Williams issued an apology:  “I am very sorry for any offence. I’m not a racist and there was no malice behind it.’’

Instead of joining those on their high horses, Webbe chose to poke fun at the episode by attending a different fancy-dress party dressed up as Liam Williams.  “I whitened my face, wore a wig and a Wales jersey with No. 15 on the back and a question on the front – guess who I am?

“It was a joke that got a little titter.  I’ve half-expected to have to apologise to Liam but thankfully everyone took it in the right spirit. That’s how these things should be treated.’’

World Rugby wasted no time demanding an explanation from the Six Nations for their failure to make an example of Joe Marler. The same World Rugby could have made the same demand from the same Six Nations over allowing France lock Yoann Maestri to get away with his ugly assault on Ireland’s Johnny Sexton. Given World Rugby’s stance on player-welfare, that made their silence all the more deafening.

Today the remark would have been seized upon by the PC zealots as a racist slur against God’s chosen people. In doing so they would have missed the point or chosen to miss it, that the description used by the affable Christie was meant as an affectionate reference to his fly-half, Joel Stransky.

Far from feeling the least bit offended, the man whose drop-goal against New Zealand won the pot of gold gave Christie a smiling nod of acknowledgement. No offence was taken by those present because they had the nous to sense that none had been intended.