Peter Jackson: George North and Alex Cuthbert are giants, but Fiji have a monster

Posted on 24th July 2014 by admin in Peter Jackson 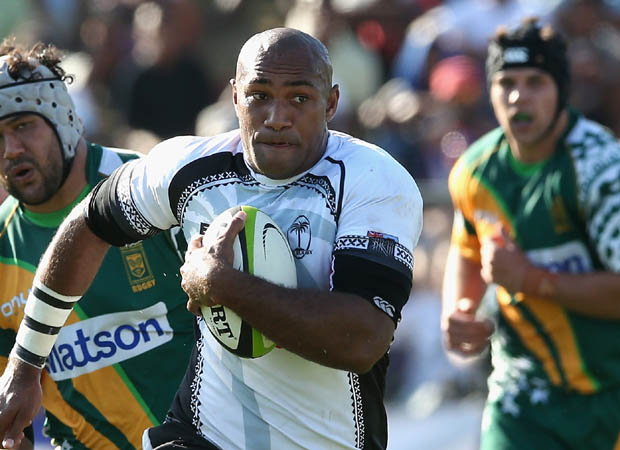 At a time when a growing number of Test wings look like refugees from Monsters Incorporated, the biggest one of all will be unleashed on England and Wales all too soon.

Nemani Nadolo will take size to monstrous new levels when he lines up for Fiji in the opening match of next year’s World Cup against England at Twickenham and against Wales in Cardiff barely a fortnight later. The nearest thing to a 20-stone wing is heading our way.

Twenty years after Jonah Lomu had a whale of a time mainly at England’s expense during the lop-sided 1995 semi-final in Cape Town, the game has now produced an even larger version. Exactly how large, nobody seems too sure.

According to the Fijian Rugby Union, Nadolo weighs in at 125kg, as near as 20 stone as makes no difference. In Japan, where he spends part of the year doing his gigantic best for the Green Rockets, they make him heavier still, at 129kg comfortably above 20 stone.

Lomu, a mere 118kg when the All Blacks let him loose in South Africa, was almost two stone lighter. Nadolo makes such giants as George North, Alex Cuthbert and Tim Visser seem, if not exactly puny by comparison, then most definitely lightweight.

Despite enjoying the best of two contrasting worlds, at the sharp end in New Zealand for six months and in a relative comfort zone in Japan for another three, Nadolo found time to ensure Fiji’s presence at next year’s World Cup.

The Cook Islands came a mighty cropper in the final Oceania qualifier although quite what they had done to deserve exposure to someone like Nadolo, nobody knew. In hindsight, they might have been better off without leading 6-5 for the best part of half an hour, thereby goading Fiji into scoring 103 points without reply. The mere mention of their name is enough to give Wales the jitters, despite the fact that they thrashed the South Sea Islanders 66-0 at the last World Cup. That did little to ease the painful memory of what the ‘Flying Fijians’ did to them during the previous one, in France in 2007.

They knocked Wales clean out of the tournament in Bordeaux. Graham Dewes’ late try, the ninth of an exhilarating contest, ensured Fiji a 38-34 win which resulted in Gareth Jenkins’ dismissal as head coach the next morning.

The fact that they had played their part in creating a rare old World Cup classic was not so much obscured but obliterated by the pervading sense of national shame at failing to make the last eight. How ironic that Fiji’s qualification should coincide with Wales in some danger of the same grim scenario next year.

The Fijian fixture is sandwiched between their critical Twickenham duels against England and Australia. Home advantage at the Millennium Stadium will be critical but Welsh anxiety will not be eased by the reappearance of one of their ghosts from World Cups past.

Nicky Little, the former Saracens fly-half whose seven goals made all the difference in Bordeaux seven years ago, is urging Fiji to throw caution to the wind, thereby making the most of Nadolo and other strike runners like Metuisela Talebulamaijaina, the French Top 14’s top try scorer.

“This is the pool of death for the big boys,” says Little, now heading up Canterbury’s elite player development in New Zealand. “One of them will get knocked out. I think we should take a different attitude to this World Cup.

“We are not going to win it so let’s go there to put bums on seats. Let’s spread the message of Fijian and Pacific Islands rugby. We need to get out there and spread the love.”

In that context, nobody is better qualified to play Cupid than Nadolo, the winged giant whose hat-trick against the Cooks took his tally to 13 in 15 Tests. His will be a foreboding presence in surely the toughest pool ever assembled at any World Cup.

Three of the five – Australia, England and Wales – are 3rd, 4th and 6th respectively on the IRB rankings. Fiji, ranked 11th, will be joined by the last qualifier, a two-leg play-off between the winners of the semi-finals on August 2 – Russia (ranked 20th) against Zimbabwe (27th) at Krasnoyarsk; Uruguay (19th) against Hong Kong (23rd) in Montevideo.

Form and home advantage point to a Russia-Uruguay final with the first leg on the last weekend in September and the return match a fortnight later. The victor will then share a common anxiety with England and Wales – how to stop Nadolo.

*This article was published in The Rugby Paper on July 13