Nick Cain gets the lowdown on Wallaby coach Michael Cheika 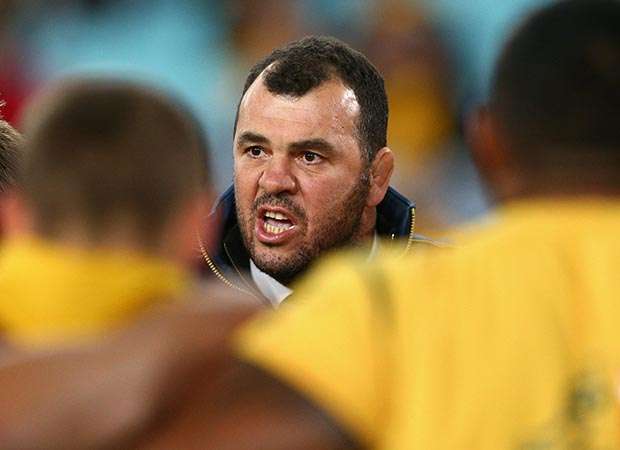 Bob Dwyer is a member of one of rugby union’s most exclusive clubs as one of the seven coaches who have won the World Cup. He will be hoping that one of his former proteges, the current Wallaby coach Michael Cheika, will join him as the eighth part of that tiny elite coaching group by lifting the World Cup at Twickenham next weekend, just as Dwyer did himself on the same ground 24 years ago after beating England 12-6 in the 1991 final.

Before that can happen there is the small matter of bumping an effervescent Argentina out of contention in today’s semi-final in South-west London. However, while Dwyer is fulsome in his praise of the Pumas, he believes that Cheika has what it takes to deliver a third Australian world title to send the game Down Under into orbit.

That belief stems from an intricate knowledge of Cheika’s rugby credentials. Not only are they are both products of one of Australia’s greatest club sides, Randwick, but Dwyer coached the rugged No.8 in the formative years of a career which spanned over 250 games for the Sydney outfit, and also included Australia U21 and NSW Waratahs honours.

Although a full Australian cap eluded Cheika, the transformation he has wrought in the Wallabies in barely a year does not surprise Dwyer. He says that the explanation cannot just be found in achievements such as the well-travelled 48-year-old cutting his coaching teeth with Randwick before earning the unique coaching accolade of having won the European Cup with Leinster in 2011, and the Super 15 title with the Waratahs in 2014. Or that he has combined coaching with building a multi-million dollar clothing empire which was innovative enough to sell denim gear to the USA.

It is, Dwyer says, a question of character. “When ‘Cheik’ first came to the Waratahs as head coach, the incumbent captain was Benn Robinson, Australia’s Test loosehead. However, for the first game of the new season the coach did not select the captain in the starting line-up, which was obviously a big blow to Benn.”

He continues: “Six or seven weeks later, when Robinson had managed to get a couple of starts, I bumped into him and asked how he was going with Cheika. He said, ‘I’m loving it’. When I asked him why, he answered,‘mate, he is straightforward and honest’. After I suggested that those are the qualities you would expect at the top end of the sport his response was, ‘yes, but you don’t get them that often’. The players love him for it.” 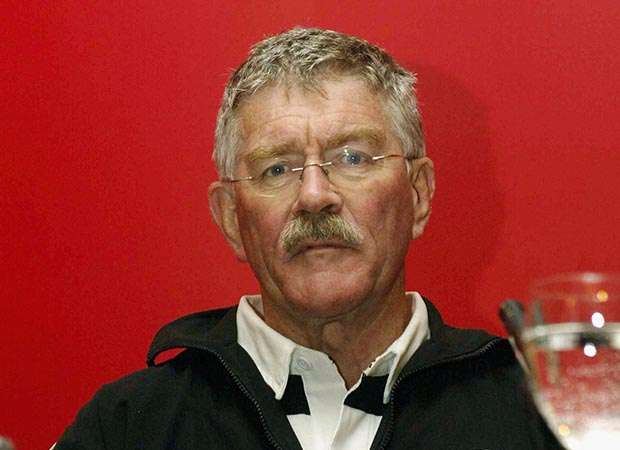 Dwyer, above, adds: “He has a sense of how players feel, and what they experience, but he doesn’t give them any excuses. He tells them what he wants to do, and shows them how to do it, but if they can’t deliver then they go by the wayside.”

He concludes: “He knows you need a good environment, and knows that Australians are generally plain speakers who call a spade a spade – and that they respond to that. In some cultures the players might get their nighties in a knot the way he speaks to them, which is to the point and sometimes a bit colourful, but his approach suits the Australian culture. He’s a broad sort of guy, and is as smart as anything.”

Dwyer reveals that the importance Cheika has attached to strengthening the Wallaby pack ahead of this tournament was something instilled many moons ago.

“Randwick were known for backline attacking play, but I coached them to nine club Grand Finals and in every single one we dished up the opposition in the forwards. We had six weeks of play-offs leading into the last game, and we would have intense scrum training throughout that period.”

He says this will have influenced his decision to bring the former Argentine hooker Mario Ledesma, below, – who he coached at Stade Francais after he left Leinster – into the Wallaby camp.

“Cheik has known the importance of getting the forward basics in place right through his rugby career. He had first-hand knowledge of Ledesma at Stade, so he knew what he could bring as a scrum coach.”

He says the development of props of the calibre of tighthead Sekope Kepu and loosehead Scott Sio (ruled out by injury against Argentina) has also been a boon.

“Sio has been an important find at loosehead and Kepu is a super athlete. Although he’s a big man I’ve seen Sekope skin a winger from 30 metres out, and I had a chat with him a little while ago. I said, ‘God was very kind you, he made you big, strong, fast and agile’. Then I said, ‘it’s time you paid him back’.”

Dwyer says that Cheika has shown the same astute selection skills in choosing his other assistant coaches. “He went out and got Stephen Larkham, who is one of the great Australian fly-halves, as his backs coach, and Nathan Grey, who brings the same passion, spirit and intensity to coaching defence as he did to practising it as a Wallaby centre.

He also brought in an Australian kicking coach with English club experience in Chris Malone – and apart from the quarter-final we have seen the benefits because Bernard Foley’s goal-kicking has been very good.”

In Dwyer’s view this quality of coaching is essential if Australia are to prevail against a Pumas side whose praises he sings. 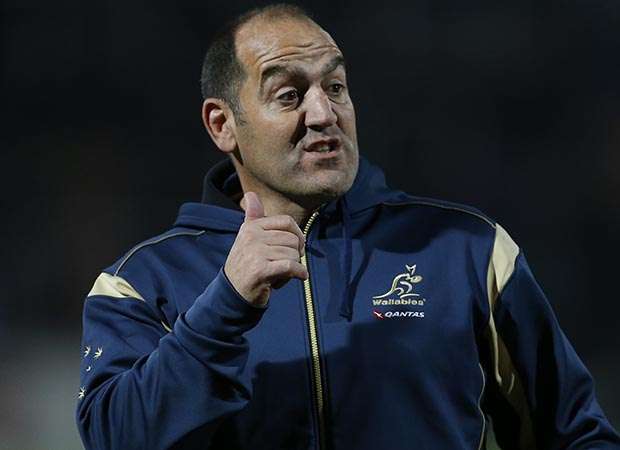 “The accuracy of Argentina’s game against Ireland was fantastic. The flattest fly-half at the World Cup is theirs (Nicolas Sanchez), and the accuracy of their support play and ball-through-the-hands is the best of the lot. I’ve never seen it before in an Argentine team, and I want to congratulate the coach, Daniel Hourcade, because he has insisted on that accuracy. Very few coaches insist on doing it, because they think it’s unnecessary. But, it is vital.”

Dwyer unwraps some of the coaching principles he developed at Randwick, and then Australia: “Players at the top level have got there usually because of their innate abilities as athletes, and often that means they haven’t needed to do mundane things like passing. But at top level you need those things, because you are up against athletes of the same ability. Coming through the grades ‘Campo’ (David Campese) didn’t know if he could pass the ball or not – because he didn’t have to. Initially, Timmy Horan was a poor passer on one side and average on the other for similar reasons, and he was a centre!”

Dwyer adds: “I’m very happy to teach them how to pass, because as a coach I can do that – whereas I can’t give them the agility to step, or the speed, that is part of their natural athletic excellence. The same thing was illustrated in a story Jack Nicklaus told about thinking he didn’t need a short iron game because for a long time he was so effective at drive, pitch and putt that he felt it was all he required. Yet, his coach kept pushing him to do it – and as he got older and lost some of the strength from his American Football days he thanked his coach for making him practice with those short irons.”

Dwyer says that like many Randwick players Cheika grew up in an environment in which you had every opportunity to learn the right lessons. He points to Col Windon, Ken Catchpole, Mark Ella and Campese, four legendary players from the club who were selected by the great and the good of Australian rugby to be the first inductees as Wallabies Invincibles, as part of an inspirational legacy.

“When you grow up watching some fantastically good players you see what they do, and you learn from it. That process continued when Cheika was part of Randwick teams that included Tony Daly, Phil Kearns, Ewen McKenzie, Warwick Waugh, Tim Carver, Simon Poidevin, Mark Ella, David Campese, Lloyd Walker, Gary Ella, Brad Burke, John Flett and Glenn Ella, all of whom were Wallabies.” 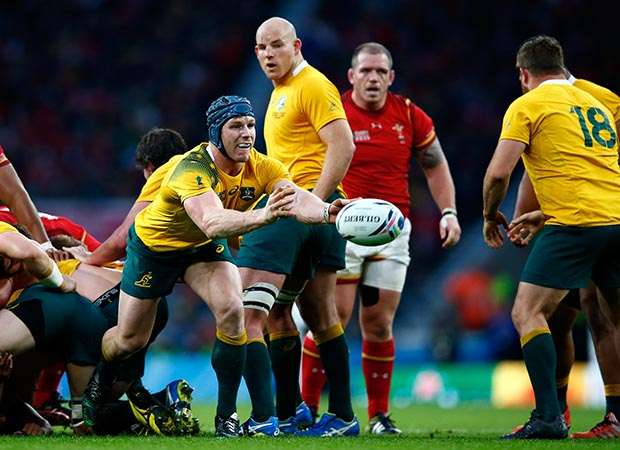 It explains why Cheika, like Dwyer, saw the potential for the ‘Pooper’ option of playing David Pocock, above, and Michael Hooper together as double opensides, with Pocock packing at No.8.

That back-row selection helped Australia to secure a 27-19 home win over New Zealand and a first Rugby Championship title since 2011 – and to put wind in the Wallaby sails going into this World Cup.

Dwyer says there is a lesson there, too, and it is one that Cheika has used to his advantage. “You have to ask yourself whether you’ve got the best 15 players available to you out on the pitch. Although it may not always appear possible to do so, you have to stay open-minded, because you cannot have top-class players sitting on the sidelines for long.

“I’ve also always quite liked the idea of a compact No.8 as long as you’ve got a tall man at blindside – New Zealand used to have that with Wayne Shelford at 8 and Allan Whetton at 6 – and it’s worked with Pocock at 8 because Scott Fardy (at blindside) has been one of the best players in this Wallaby team.”

It was typical of the smart strategic thinking Cheika has employed during his year-long tenure that New Zealand did not get another crack at the Pocock-Hooper combination when the teams met again in Auckland a week later. The All Blacks won that Bledisloe Cup ‘friendly’ 41-13 – but if Australia get past Argentina they can rest assured that Cheika will have ‘Pooper’ waiting to make their acquaintance again in the final.