Posted on 15th January 2015 by Nick Verdier in Nick Cain 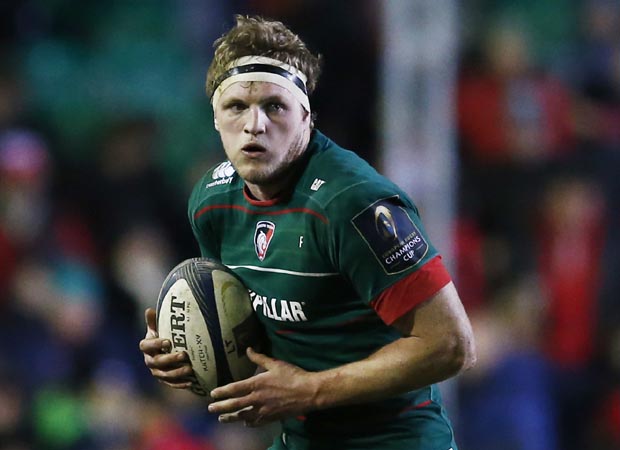 Jamie Gibson is a scholar and a gentleman, a true blue Oxford University-educated boffin who, inspired by the philosophy of Socrates, the words of Homer, and the deeds of Julius Caesar, is a student of the Classics.

However, Gibson has an alter ego, which, over the last couple of seasons, has earned him a regular place in the backrow of a club which prides itself on being the most hard-bitten blue-collar outfit in the Premiership.

The Leicester backrow has never been inhabited by sensitive souls contemplating man’s place in the cosmos from the safety of ivory towers. Gibson’s rugby world is a combat zone full of ruthless competitors prepared to do what it takes to win the coveted Tigers shirt and batter anyone – opponent or squad-mate – who tries to take it.

The durability and resolve required to achieve primacy is written on the pugilistic features of Leicester backrow legends like Neil Back, Martin Corry, Dean Richards, Dosser Smith, Jon Wells, and the current openside incumbent, Julian Salvi.

That Gibson has not only won a place in the Leicester line-up at blindside since he joined from London Irish 18 months ago, but kept it for 40 matches, is as much a testament to resolute character as it is to athleticism and ability to learn fast.

Gibson has been fortunate, too, that his arrival at Welford Road coincided with injuries to Tom Croft and also Steve Mafi’s return to Australia, but he already had strong credentials as an England U20 who had been called up for senior honours by Stuart Lancaster on England’s 2012 summer tour of South Africa.

Having seized his chance at the Tigers like a hungry fighter from the back streets rather than a cloistered choirboy, the rangy 6ft 5in, 16st 11lb (107kg) Gibson remains on the long list of England backrow forwards in 2015 World Cup contention.

However, it has come at a price with the 25-year-old forced to extend his four-year Classics course to six or seven years, and to leave the hallowed halls of University College, Oxford, for the non-existent halls of the Open University. Gibson says that logistics and flexibility dictated the decision.

“Before I joined Leicester I was finding it very difficult to fit in a full programme as a rugby pro alongside 40 hours of academic work a week. I was finishing regularly at 1am, and it was a bit too much. When I realised that to go on England’s 2012 summer tour of South Africa I would miss about six weeks of an eight-week term, it became untenable. So, I stepped away from Oxford with a 2:1 in Classics modules, and I’ll finish it at the Open University, hopefully over the next two years.” 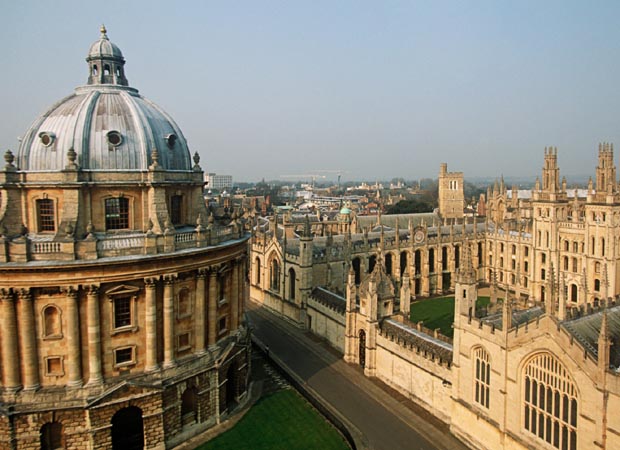 He adds: “At the moment rugby comes first, but academic work is an enjoyable diversion. A change is as good as a rest, and when you do something different you feel refreshed.”

Ask Gibson what it is about the ancient Greeks and Romans that fascinates him and he explains that it is a long love affair.

“I enjoyed studying Classics at school (Marlborough College). Its diversity appealed to me because it involves language, philosophy and ancient history. I particularly enjoyed ancient history, and going to Oxford was very appealing because it is known for having the best Classics teaching in the world. So, that was my main focus, and rugby was something I enjoyed but wasn’t top of the agenda.”

Gibson continues: “But then things changed. None of my family were involved in serious sport, including rugby, but Neal Hatley, who was forwards coach at London Irish, said they wanted me. I enjoyed the variety at London Irish, where I sometimes scrummed at No.8, played as a blindside jumper in the lineout, and defended at openside. By that time I had already played for England U20 in the Junior World Championships in Argentina, and you could say that I was in a hurry to maximise on my rugby potential. So, when Richard Cockerill sounded me out about joining Leicester, my view was that it would introduce me to a different rugby culture, and to people that I could learn from.”

Question Gibson about the differences between Leicester and London Irish and his response is clear-cut. “On a very basic level, the history. At Leicester there is a constant pressure because of the expectation to win. There are 23,000 people attending most matches, and it is a knowledgeable crowd. Leicester are very much a gain-line side, with physicality around the breakdown and tackle area highlighted.”

He adds: “At London Irish there was a lot of emphasis on skill development and playing a high-tempo game, whereas at Leicester it’s about physicality and strength in the contact area – and that was an area I wanted to concentrate on.”

Leicester’s fabled training methods were described as brutal and outmoded by outsiders earlier this season, but Gibson offers this insight.

“It can get confrontational at times – and when things get tasty, they can get very tasty. But you also have to be fit and available to play at the weekend, so the big physical sessions do not happen every time you train. However, players like Dan Cole and Tom Youngs are world-class forwards who constantly demonstrate what it takes to reach that standard. It’s the same with Tom Croft, who’s now back in the mix. I might have spent all last season trying to put something into practice, but you can learn instantly in training from watching a player like that.”

Gibson sums up: “You have to earn the right to play in a Leicester shirt. It’s about being physical and aggressive, but, above all, it’s about working hard for the team. That is a very strong principle – and effort earns respect.”

The only downside for Gibson is that he did not play in a Varsity match in his two years at Oxford before joining Leicester. He says: “In my first year I played in every game before a medial knee ligament injury in the Stanley’s match ruled me out just before we played Cambridge at Twickenham. In my second year a fractured fibula did the same – but by that time I was playing regularly for London Irish, and you cannot play in the Varsity match if you play for a professional club from September to December.” 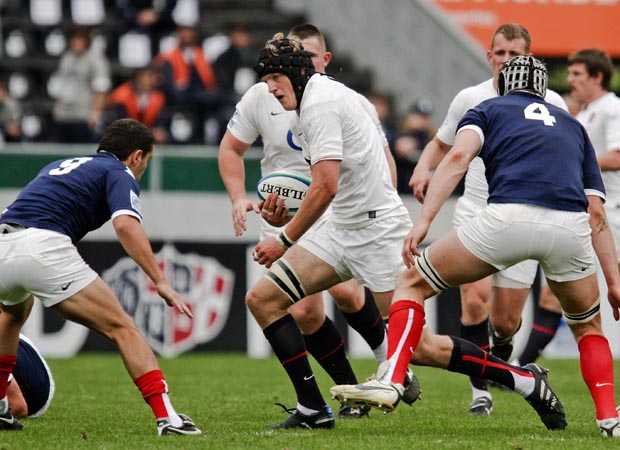 Gibson says that his Varsity background and academic interests make him something of a curiosity in the Leicester changing room, especially to an academy generation more familiar with Assassins Creed than Aristotle. However, Gibson takes the boffin banter in his long stride.

“I still get the occasional comment. During training it’s ‘soft boy who won’t get his hands dirty because he’s interested in books’ stuff, and then Richard Cockerill will accuse me of having gone to Cambridge! I don’t mind being seen as a boffin. I like to think about what we’re doing, to be someone who assesses and reads the game – but sometimes you simply have to put your head down and get stuck in. I enjoy both aspects.”

Gibson has flourished at Tigers playing a roving blindside role similar to Croft, and offering the same athleticism as a near-failsafe option at the front of the lineout. However, they are not identical. While Gibson might not have Croft’s blistering pace he is no slouch, and he brings a constant tenacity and presence in the tight-loose that often trumps his esteemed rival.

Gibson, who was brought to Leicester for a versatility which includes covering for Salvi at 7, opts for diplomacy: “As long as I’m playing I don’t mind what shirt I’ve got on. It’s been more of a natural 6 role as a lineout target and a carrier wider out, and I’ve enjoyed it a lot. At openside if you are smaller and lower to the ground you do have obvious advantages against someone who is 6ft 5in, like me. Tall flankers can look a bit awkward over the ball, but then you get someone like François Louw (6ft 3in) who competes very strongly at the breakdown and also has the ability to make his size count elsewhere.”

Gibson’s adaptability, work-rate and intelligence have helped him to make his mark during a period in which Leicester’s primacy has been challenged by rising powers like Northampton, Saracens and Bath.

Gibson says he’s a keen lineout professor. “I definitely enjoy it, and I’m a bit of a lineout ‘naus’. Geoff Parling and Graham Kitchener are the main callers, but lineout defence is one of my main roles. There are about 25 lineouts per game, so there are plenty of match-turning opportunities. At times this season we’ve been successful putting pressure on the opposing lineout, such as against Ulster in the European Champions Cup, and their game-plan fell apart.”

Gibson’s rugby studies include the laws, and his observations should give the IRB/World Rugby laws-men food for thought with the World Cup not far away.

“I’m interested in the laws, and in the five years I’ve been a pro they’ve changed a lot. One of the interesting things is that although the referee is the lawman on the pitch, and all referees have the same law book, there are different interpretations every weekend.”

He adds: “It’s definitely a good game to play, but there are frustrations about interpretation. One of those concerns the choke-tackle. In the past if you were going forward with the ball then you got the advantage of the scrum, but these days teams are prepared to give up 20 metres of territory in order to hold up a ball carrier and win a turnover. I’d like to see it go back to the team going forward getting the advantage, whether or not the carrier is held up.”

As for Leicester, with the club currently outside the Premiership play-off places in mid-table, and with their hopes of making the last eight in Europe hanging by a slender thread, Gibson says they have limited room for manoeuvre.

“We know that we have to win every game. In some matches this season we’ve let ourselves down given this group’s ability, but if we keep winning we will put ourselves in the right place. Beating Ulster and Toulon in Europe, we showed we could mix it with the best, and we still have an outside chance of qualifying.”

As for England, Gibson accepts that making the 2015 World Cup squad with Tom Wood, James Haskell, Tom Johnson and Croft in the queue ahead of him is another outside bet – but says he won’t fail for lack of work-ethic or self-belief.

“I’ve played in three end-of-season Barbarians games for England, and my big work-ons are physicality and dominance in contact. You never say never. If you are playing well enough every week you will be in the mind of selectors. It means you will be in a good place whether your chance comes due to injury, or on form.”

Gibson says that his Leicester experience has taught him that determination and consistency have their rewards. “To play 40 games for the Tigers was not in my wildest dreams when I arrived at the club. I’d come to Leicester to learn, but I also knew that if I got a chance I had to take it. I feel I’ve done that.”

Gibson is not alone in that assessment.