Posted on 17th February 2017 by admin in Jeff Probyn 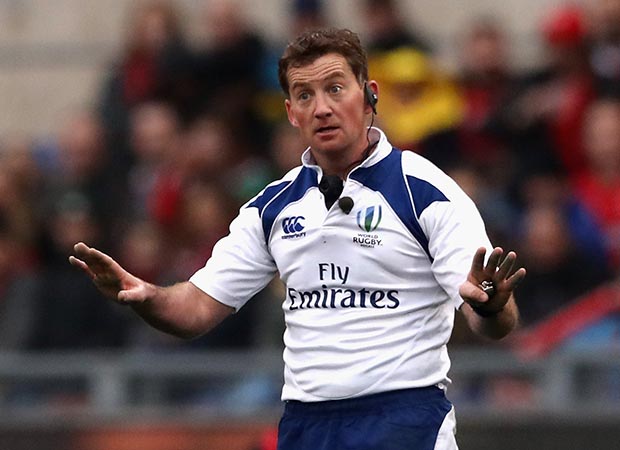 The one thing we didn’t need has already happened and we have only just started what should be a contest between teams. In two of the three games last week, it was the referee who made the difference between winning and losing, not the players.

Admittedly, in the England v France game it was only Angus Gardner’s second Six Nations match and he had an official referee assessment audience watching his every move from the Royal Box – but that is no excuse.

Usually a referee gives the attacking side the benefit of a slight advantage at the breakdown allowing the tackled player a few seconds to release the ball after the tackler rolls away but Gardner penalised a player for non-release almost instantly.

I have a feeling he was given some advice at half-time as he changed his style a little in the second half which proved a disadvantage to France as they had dominated the attack during the first half of the game.

I felt England were kept in the game by the penalties awarded against the French attackers for not releasing but at least Gardner was consistent, something the more experienced JP Doyle was not.

Italy’s coach Conor O’Shea said after the game against Wales, that he wants to change how referees perceive Italy, a comment made after a game where the referee had obviously prejudged the game and had expected Italy to lose.

Doyle did his best to ensure they did by awarding 16 penalties against Italy and only five against Wales with many coming at the scrum where a dominant Italy were endlessly penalised for wheeling, despite really obvious Welsh tactics.

As far as I know, there is no law against wheeling a scrum through a drive and, in fact, it is a legitimate means of gaining possession if controlled through 90 degrees. Doyle’s preconceptions spoiled virtually every Italian attack and gave the Welsh an attacking platform of which they took full advantage.

That win set up yesterday’s clash as a must-win for both sides, with Wales as unexpected favourites to stun the English and break their unprecedented run of victories.

A rampant Wales team in Cardiff is no place for the faint-hearted, as the England team will know having been prepared all week for what they faced yesterday.

Whether the 1989 Mark Jones’ elbow to the back of Mike Teague’s head at the kick-off of the game, or in 1987 Wade Dooley’s punch on Phil Davies, Wales v England always gets the blood boiling one way or another.

For me Wales will always have a special place in my heart as this is where I saw my first international at the old Cardiff Arms Park.

Playing for the South of England U16s in Newport, our trip included the chance to see Wales versus England the day after our match.

Having won our game, the hope was that England’s senior team would do the same, but this was in the early Seventies when Wales were almost unbeatable with the likes of Gareth Edwards, Phil Bennett and the Pontypool front row.

Despite the inevitable loss, we had a great day enjoying the banter of the crowd and the intense atmosphere that the old Arms Park used to engender but that was when Wales were winning.

When I came back to Cardiff as a player in 1991, Wales had become a much less formidable side, although they still seemed to have an edge over England who had not won in Cardiff for 28 years.

The game itself may not have been a classic but England won 25-6 to break the hearts of the crowd who despite everything thought that, at home, the Welsh team were unstoppable.

The win did change the attitude of the fans and the convivial atmosphere that surrounded the games seemed to vanish in an instant to be replaced with vitriol at every turn.

In a country where rugby is the national game it’s easy to understand the frustrations of fans when their once dominant team seems to collapse overnight but that certainly wasn’t the case.

Wales had been on a steady decline for a number of years but somehow had always seemed to manage to beat England until the start of the Nineties when, thanks to Don Rutherford, the England team embraced an almost professional approach to training and match preparation.

This resulted in a series of wins starting with a thumping 34-6 thrashing in 1990. It was such a shock that I remember Robert Jones saying at the post-match meal that the Welsh players felt they couldn’t go home as they had let down their country so badly.

To lose to England was one thing but to be so badly beaten with so many of the ’89 Lions in the team seemed just unthinkable, leaving all with a sense of disbelief.

Rob Howley was banking on his Lions hopefuls doing enough to beat Eddie Jones’s England and stop the chariot from rolling on, better luck next year.