Brendan Gallagher: Premiership final promises to be an absolute cracker

Posted on 24th May 2017 by admin in Brendan Gallagher 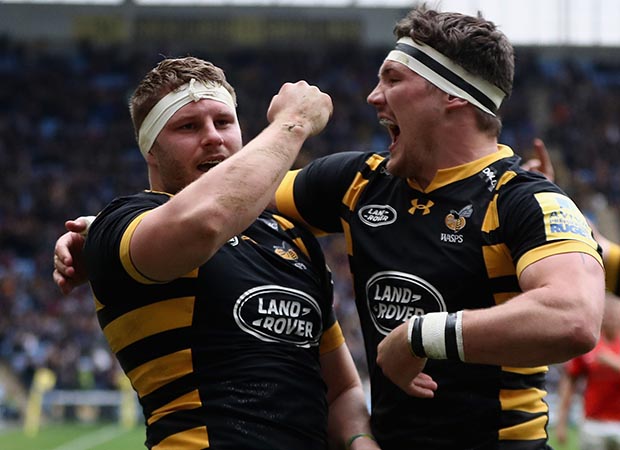 So after 22 rounds and two pulsating skin-of-your- teeth semis Wasps will play Exeter in the Aviva Premiership Final in a game that every neutral in the country probably hoped for.

Both sides have lit up English rugby with their exciting brand of attacking play and, lest we forget, they also finished first and second in the regular season. A sparkling spectacle surely beckons.

Between them these two sides scored 175 and conceded 116 tries in the regular season – it’s virtually impossible to imagine anything other than an all-singing all-dancing cracker.

The two finalists are also crammed with players who have been overlooked by the selectors this season – England and the Lions – and a sell-out Twickenham final is the perfect stage to make your point.

The Chiefs, though, have the recent experience of last year’s final to call on and there is also still that accumulated nous at Sandy Park of how to conduct play-off campaigns garnered when they seemed to contest the Championship play-offs on an annual basis.

Although they have been working hard in training for ten months or more, this week’s preparation could be vital. There is still work to do. Wasps squeezed home yesterday even though two of their two strike backs – Elliot Daly and Christian Wade – scarcely featured.

For long periods of the game – too long from Wasps’ point of view – the Leicester pack owned the ball or forced Wasps errors at source even when Wasps did get their hands on it.

Dai Young’s team struggled to bring all their big guns to bear and that needs rectifying as does their line-out where neither Ashley Johnson nor Tommy Taylor enjoyed an evening to remember.

There was food for thought also in the galvanising performances off the bench of scrum-half Dan Robson and flanker Guy Thompson. Will Young be tempted to start both players? In pure rugby terms it’s always a close call between Robson and Simpson but the latter often looks more comfortable coming off the bench than starting.  As for Thompson, he gave Wasps the go-forward that Nathan Hughes and James Haskell had struggled, on this occasion, to provide. Were they just particularly well shackled or is there actually tough selectorial calls to be made.

One thing that will have delighted Young was a fine all-round performance from Willie Le Roux, who is beginning to settle and provide those special contributions he was signed for. His return to form is timely because Kurtley Beale looked like his season was over when he limped off yesterday and they are big boots to fill at full-back.

No better man than Le Roux and that switch would allow the underrated but very talented Josh Bassett a starting role.

As for Exeter, perhaps their biggest challenge will be repeating the intensity they displayed against Saracens.  Yesterday at Sandy Park was virtually a final in its own right in that domestically every side knows that at some stage they must beat a full strength Saracens to win any silverware. 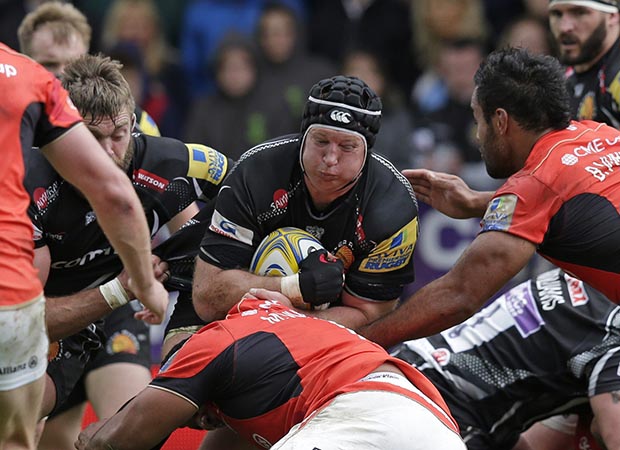 After the most famous win in their history thus far, the Chiefs gathered in a circle yesterday as Sweet Caroline struck up on the PA system. The celebrations lasted awhile and, yes, you have to mark the moment but at one stage you could see Rob Baxter gesturing with his palms downwards, calling for everybody to start toning it down a tad. They had won nothing yet.

Meanwhile Thomas Waldrom, above, being interviewed for TV and never one to get carried away, was quick to focus on the only game that matters now. The sporting world is full of losing finalists who left their best game in the semi-final, the most recent in the rugby world probably being Saracens in 2014 when they trounced Clermont 46-6 in the European Cup semi-final only to lose to Toulon in the main event.

As has been the case all season it was Exeter’s all round competence that prevailed against Sarries, a team full of intelligent, thinking rugby players – although it is doubtful whether the Chiefs have ever produced such a tigerish 80 minutes defensively. That was the real difference against Saracens, the factor which elevated the Chiefs to a new level.

Since Christmas the Chiefs have been scoring tries for fun but they have conceded plenty of five pointers as well and that approach can be high risk come the play-offs. It’s a matter of balance, not sacrificing their exhileratig attacking intent but shedding that mindset which says leaking a few tries is not important as long as they score more. They achieved that tighter approach wonderfully yesterday, but in a looser game against Wasps they could revert to type.

For many it was surprising not to see Henry Slade start yesterday but Rob Baxter has a magical selectorial touch. Ollie Devoto and Ian Whitten had a fine game paired together at centre and it was clear from the outset that Chiefs wanted to match Sarries’ physicality in midfield and provide defensive back up for Gareth Steenson who teams tend to target.

Baxter’s big calls came off elsewhere as well. Young Stuart Townsend started the season as the Chiefs’ third choice scrum-half and yesterday was only his fifth Premiership start but he damn near stole the MOM honours during his highly effective 53 minutes on the park. Superb.

Will Baxter stick or twist? Is the challenge of Wasps at Twickenham substantially different to Saracens at Sandy Park? Possibly. I certainly wouldn’t be surprised if the tried and tested international experience of Michele Campagnaro and the sheer class of Slade see them return to starting duties against Wasps.

And the result? Wasps by a whisker.