Home / Features / Columnists / Guscott column: Lions must be ready, Springboks will only get better

Guscott column: Lions must be ready, Springboks will only get better 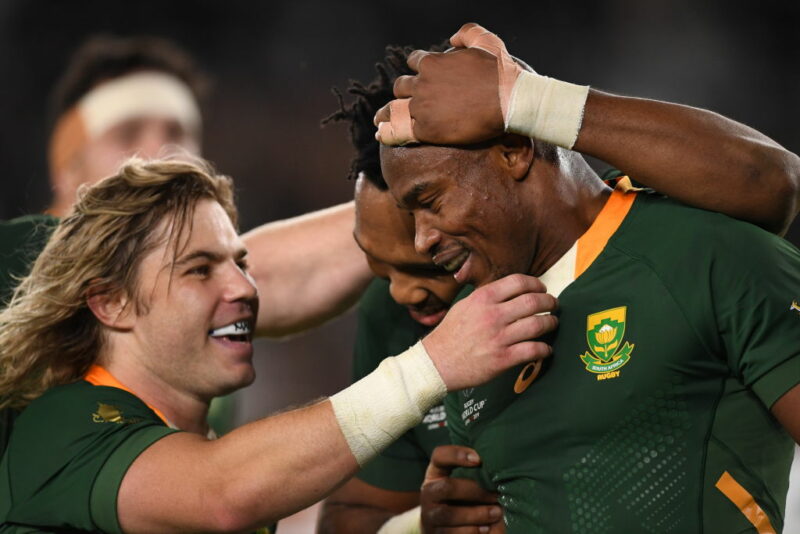 THE 2021 Lions tour of South Africa will be harder to win than the one I was on in 1997 because at five weeks, and eight matches, it is a much shorter tour.

In 1997 we had two extra weeks and five more games to get ready for a very intense series, and it is uncanny how these Lions tours always seem to come after South Africa have become world champions!

It means less time for preparation and tactical adjustments, and at the same time the current world champions look very strong, particularly up front.

South Africa look very destructive and confident, and they have the bonus of having a good half-back pairing of Faf de Klerk and Handre Pollard – just as they did in 1997 with Joost van der Westhuizen and Henry Honiball.

You have to respect what Rassie Erasmus has achieved as coach, given that when he first started two years before the 2019 World Cup the number of games South Africa were losing was not funny. However, they rose to the challenge of the tournament at the right time, and produced everything perfectly when they had to in the final.

My feeling is that South Africa will only get better, mainly because, until the final, I don’t think we saw them at their best in the World Cup.

It is a very good thing that the Lions have Warren Gatland as their head coach again, because, going into his third tour in charge, no-one knows better than him what is required.

He will be keeping a close eye on what South Africa do, and will already be aware that their De Klek-Pollard half-back pairing is unlikely to change from the World Cup, and that the same applies to most of their backline, with Damian de Allende, Lukhanyo Am, Cheslin Kolbe, Makazole Mapimpi, and Willie Le Roux still around.

It is also possible that Frans Steyn, now 32, could continue as a utility back during the series.

In fact, the Lions can expect to meet a pretty much unchanged Springbok world champion side, because, although two veterans, loose-head Tendai “The Beast” Mtawarira and flanker François Louw, have hung up their boots, there is also a good deal of continuity in the forward pack.

Pieter-Steph du Toit, Siya Kolisi, Eben Etzebeth, Lood de Jager, Frans Malherbe, Steven Kitshoff and Malcolm Marx should all be available, and the main question is whether No.8 Duane Vermeulen, now 33, manages to last the course.

Vermeulen is very influential, and as a crucial component in their World Cup victory over England, he will be difficult to replace. The No.8 would be an even bigger miss than the Beast, because of his impact in defence and as a carrier.

England got no change out of South Africa’s defence five months ago in Japan, and could not even score a try. At the moment it looks as if a good part of the England side will be in the Lions Test team, and, even though the Welsh, Irish and Scots will put real pressure on any English player in pole position, it raises a lot of questions.

However, when you look for answers, the only one is that South Africa look bloody hard to beat. Under Erasmus they play a game based on kick-pressure-squeeze tactics, and one of the best ways to counteract that is to match them for forward muscle – and perhaps Gatland reckons that with the pick of the Four Home Unions he can do that, after which everything becomes possible. The danger for South Africa is that they are not used to expanding their attack, because they have become too locked into their kick-chase and defensive squeeze strategy to get results.

A lot will depend on how South Africa progress, because if they want to win the series they have to develop a more attacking game plan with more variety.

Whereas New Zealand play with such intensity that they find the opposition’s weakness, and then exploit it, the South Africans are almost always route one – which means trying to run over the top of you.

It is why there was a massive emphasis in 1997 for the Lions to meet them on the advantage line, with each of us determined to hold the line by protecting the inside shoulder of the team-mate on our outside.

South Africa make analysis easier because of the way they play, and we knew exactly what was coming, and we made our plans accordingly. By contrast, it is much more difficult to prepare for New Zealand, because of their skill set and adaptability.

Even this far ahead, I would look for the Lions to match or beat South Africa up front, and to employ a great kicking game, particularly in putting pressure on their back three.

I’m convinced they are ‘gettable’. Mapimpi is not a great kicker, and while Kolbe is pretty good he is not the biggest, while Le Roux can be inconsistent. He was good in the final, but ordinary until then.

The series looks from this far out like a big game of chess, with a lot of attrition. We can expect another brutal Test series, although we are unlikely to see the Lions dominated like they were in the first Test in 2009.

Gatland will get the squad’s fitness at a very high level, and will stress the importance of cutting down on penalties and silly errors. He will also want to get ahead in the series, like we did in 1997, to put the pressure on South Africa.

It will not be easy to do this in a five-week tour of eight matches, in which Gatland will have to put his Test units together and sort out his first and second choice line-ups, while giving his players two games each, and maybe a Test rehearsal.

At the same time it would be very dangerous to think that the results from the matches before the Test series are not important, because if you start losing in South Africa it will be all you hear about.

In 1997 we had our first hiccup by losing to Northern Transvaal, but we bounced back straightaway, which is really important in a country in which we had already been called ‘pussycats’. On tour the noise from outside the squad can easily start to make an impact, especially if it leads to internal questions about selection.

This time the Lions will have to be clued into the Test series from the start, because in three weeks it is on you. The good thing is that there is no time in which players can get disenchanted until the big drop-off after the side for the first Test is announced.

It is another reason why it is so important to win the opening Test, because if some players see no chance of playing in the three-match series they might go off tour a bit.

It is a good thing that Gatland knows all this, because he has been there and done it already.