Cain column: Manu Tuilagi ban is a travesty and insult to courage 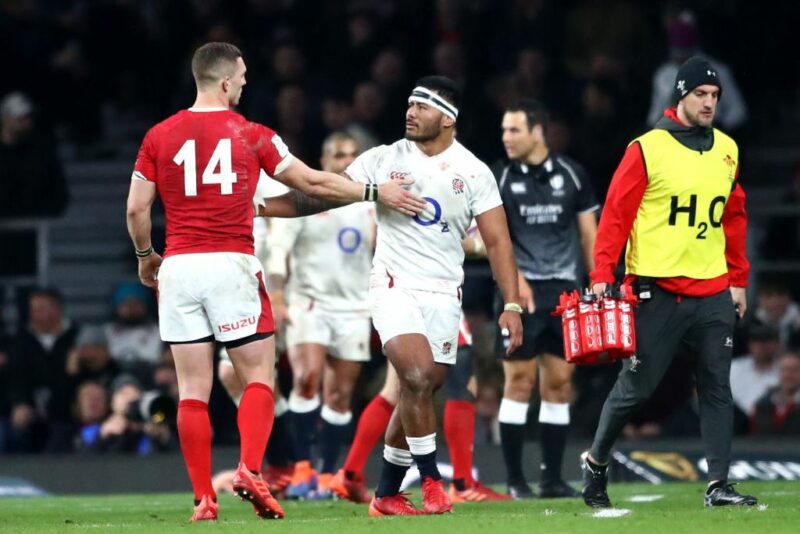 The sending off of Manu Tuilagi against Wales was the wrong decision.

It was wrong not because strong officiating and disciplinary action to mitigate against concussion in this sport are mistaken, but because the application of the law in the case of Tuilagi’s 74th minute cover-tackle on George North at Twickenham last weekend was mistaken, and reflects a one-size-fits-all disciplinary mentality that makes unreasonable demands on players.

Freeze-frame analysis of the Tuilagi tackle on North shows that the high tackle law is an ass – certainly in the way it was applied by Kiwi referee Ben O’Keeffe and his South African TMO Marius Jonker – because it allows no room for the mitigating factors often involved in corner-flagging tackles.

The law on dangerous high tackles to the head was also shown to be hopelessly inconsistent during the England- Wales match, because just before half-time Tuilagi was on the receiving end of a head-high “hit” by the Welsh centre Hadleigh Parkes, which resulted in nothing more than a penalty – more of which later.

In a contact sport the reality is that unless the lawmakers are prepared to go down the route of making it illegal to cover tackle to prevent a try, there are always going to be grey areas.

The corner-flagging cover tackle is one of the most highly charged areas of Rugby Union. It is a last-ditch effort to stop an opponent scoring, and it often occurs at high speed with little or no room for nano-second adjustments by either the defender or attacker.

Both players are totally committed, but the defender especially, because of their dependence on speed not only to get to the potential try-scorer, but also to have sufficient impact to stop them in their tracks, knock them into touch, or jar the ball out of their hands.

It puts a premium on courage and commitment because of the velocity involved, and youngsters in every era have been raised to see the corner-flagging tackle as one of the great defensive contributions a player can make.

If we want Rugby Union to remain a contact sport, then the mitigation in Tuilagi’s case is massive.

The analysis shows that as North is bearing down on the English try-line he is tackled by Henry Slade. It is not a textbook tackle, with Slade going low but instead risking injury by getting his head in front of North’s left knee in a desperate attempt to slow his progress.

Slade is successful, and the 6ft 4ins, 16st 7lb Welsh wing starts falling to his knees four metres from the line.

While this is happening Tuilagi is covering across at full tilt, and he lines up North for the tackle when he is about three metres from him, and, with both players looking at each other, the England centre lowers his torso to ensure he makes impact around waist level.

A split-second later when the impact is made North has lost speed and fallen to his knees – which almost certainly makes him about half his original height – and Tuilagi, who has virtually no time to make any adjustments, has his left arm outstretched, but finds nothing to encircle, and has tucked his right arm close to his body.

There has been no full-on the head contact by Tuilagi to North, who in the course of the action has fallen from 6ft to half that height.

Furthermore, at no stage was there intent by Tuilagi to make a high tackle, or that the tackle would have been anywhere near North’s head and shoulders had he remained on his feet.

None of this was taken into account as O’Keeffe conferred with Jonker. He was told by the TMO: “The initial contact is on the head, and the right arm never reaches out to the tackle to make the contact first”.

O’Keeffe responded: “It’s a shoulder charge – we are not allowed to mitigate this…so, it’s a red card.”

What Jonker did not mention is that if Tuilagi had reached out with his right arm to “make the contact first” it would have hit North in the face with full force, and in all likelihood knocked him out. Also, the idea that at warp-speed you can wrap an arm around a man who is falling and twisting with any precision is a nonsense.

There was no mitigation, either, for North’s height having suddenly dropped by half through no fault of Tuilagi’s, or that, given those circumstances, the England centre had somehow avoided making full contact with the wing’s head.

By contrast, the 35th minute tackle by Parkes on Tuilagi was always high and dangerous, with the Welsh centre having time to adjust and go lower in the approach to contact.

The footage shows that Parkes was never aiming lower than head height on Tuilagi – and that in a big collision his head, chest, shoulders and arms made contact above the shoulder line.

The illegal hit started with the top of Parkes’ head hitting Tuilagi full in the face, leaving him with a deep cut over his right eyebrow, and finished in a seatbelt tackle.

As Tuilagi was patched up there was no TMO intervention, despite a reckless tackle which could have left both players concussed, and if the head strike had been any lower could have resulted in a broken cheekbone, nose, or jaw for the English centre.

Given that the only sanction for Parkes was a penalty, Tuilagi did not deserve a yellow card, let alone a red.

How the match officials and the citing officer let the Parkes tackle go, while Tuilagi was given a four-week ban this week by a Six Nations disciplinary panel is an utter travesty.

The same is true of a disciplinary system which advocates a blanket ruling on dangerous/high tackles in which referees have been instructed that there is no room for mitigation.

Each case should be judged in its own context, with mitigation considered on the field by referees and off it by disciplinary panels, otherwise the disciplinary structure of this game will fall into disrepute.