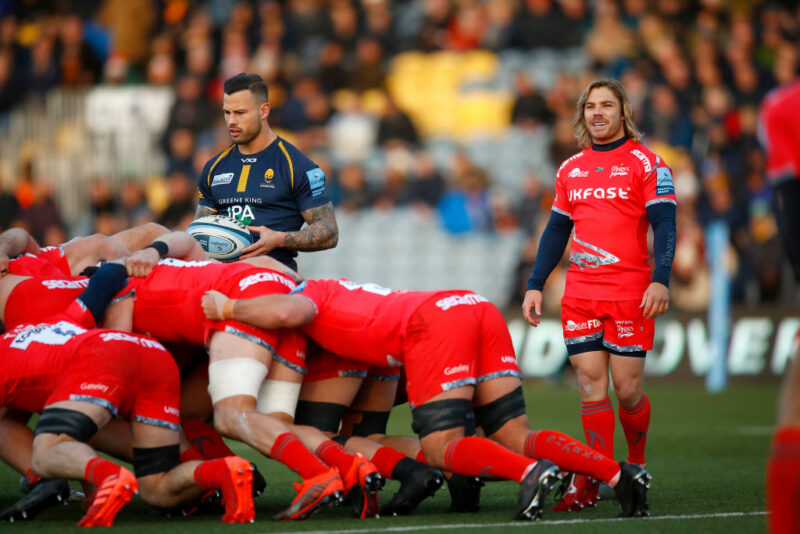 I suspect I’m about to hack off all front rowers past and present but hopefully they will read on because I am also going to defend them to the hilt. Sort of.

We, the viewing public, have had a bellyful of the utter futility surrounding scrums and the re-setting of said scrums. The ridiculous faffing around has taken boredom to new levels and is selling the paying public short. Sympathy for the so called black arts has run out. It’s cheating plain and simple.

At least twice per match we come across periods of three or four minutes in which nothing happen. Ludicrously many of those involved, especially in the front row, are only on the pitch for 45-50 minutes a week.

You know the drill. Whistle blows for a scrum, followed by the slow motion gathering on the mark at which point somebody will take a knee for no good reason. The referee might also take this opportunity to haranguing various forwards – there should be one lecture before the game and that’s it – and then suddenly another forward develops contact lens issues.

Then comes the ritual slow motion choreography of harnessing of the front row like train carriages being coupled, the second rows coming together, hip to hip, binding tightly before going down on one knee and slotting into their front row with the flankers then adjusting their positions. Meanwhile the No.8 goes for a final wander, talks to his scrum-half and spies the enemy for one last time before shoving his head between his locks’ backsides.

Then comes the crouch, set, bind sequence which is often interrupted by a loss of balance or a flare up between the front rows. Referee steps in, breaks it up, issues another long lecture and we are treated to the entire coupling/binding sequence again.

Finally the two packs engage, the two idiot scrum-halves start pushing each other like schoolboys but eventually we have a scrum. It goes down. Somebody is to blame but the referee bottles it and he orders another scrum. Groundhog Day has nothing on this.

Now, we must accept that there are major safety issues when two packs with a combined weight of 1.8 tonnes lock horns and that packs must be given sufficient time to bind and prepare. But only once. The time has come to do away with re-sets.

You get one shot at it. If you miss a penalty or throw in crooked at a lineout you don’t get another go. Why tolerate incompetence and persistent blatant cheating at scrums?

Props and hookers are among the biggest earners in the game. They train five days a week for barely an hour of rugby in which they might be involved in, say, 12 scrums. It is their absolute job to get them right. If they cheat, mess up or are rubbish they must get pinged immediately.

When you survey professional rugby, props often seem to be expert at everything except scrummaging and this is where I willingly offer up much needed TLC for our front row warriors. We are making life impossible for them.

These days they must handle like backs and operate like forklift trucks. They are expected to make 15 tackles per game, six off loads and endless carries. No wonder they are knackered by scrum-time and desperate to manufacture a breather. No wonder their scrummaging strength and technique falls apart.

If we want the scrum to be a part of Rugby Union we need to cherish our scrummagers and not try and morph them into Haarlem Globetrotters. And in that respect it would help considerably if referees started blowing up for offsides and forward passes, the natural breaks we used to have.

For decades athletics was plagued by false starts in the sprints. All eight competitors were allowed one false start, being eliminated on their second, so it could easily take seven or eight minutes to get a tense race away as each competitor tried it on. Occasionally there was a certain drama to this, 99 per cent of the time it was boring as hell. Like scrum resets.

Then in 2001 came a new ruling. The entire race was allowed one collective false start; thereafter the next false starter would be eliminated. And the next. This sounded much better but of course everybody still went for broke at the first start so there was ALWAYS at least one false start, often more.

Finally in 2011 the IAAF lost patience. No false starts whatsoever! Instant dismissal from the race. The athletes complained bitterly – you don’t know the pressures, the tension, it’s the guy twitching next door that set me off etc. etc. – and would you believe it the first big name runner to fall foul of the ruling was Usain Bolt in the 2011 World Championships 100m final. Cue universal outcry and condemnation. The whinging was epic.

But for once the IAAF stuck to their guns. These highly paid athletes knew the regulations, all were perfectly capable of making a legal start if they wanted. Stop faffing around playing mind games and get on with it.

And lo and behold false starts have virtually become a thing of the past.

Sportsmen and women will always adapt. When your livelihood is on the line it concentrates minds wonderfully as rugby would discover it ever had the courage to go for broke at scrum time.