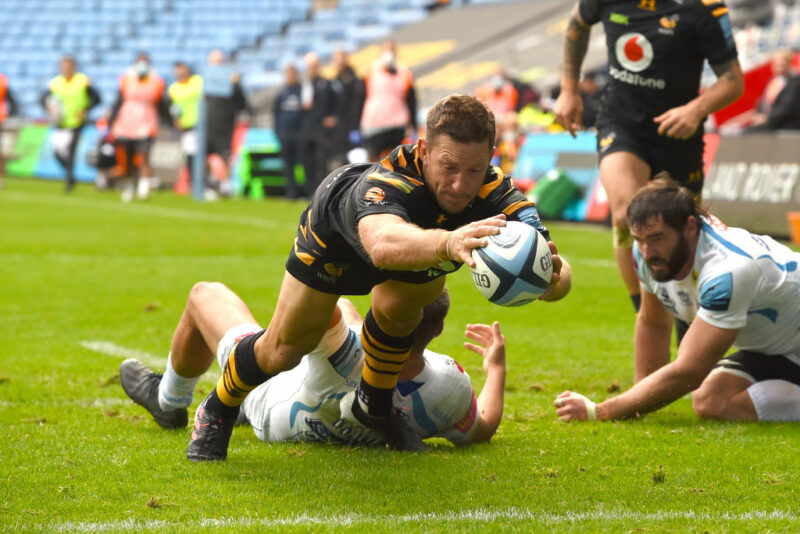 IT would be hard to hit form any better than Wasps have done on the way to the Premiership final against Exeter at Twickenham on Saturday evening. Wasps have seemed jet-propelled since the restart in August, and it was reflected in their very good result and performance against Bristol in the semi-final.

By scoring five tries to four, and basically having the game wrapped-up after an hour, coach Lee Blackett’s side proved that their attacking game packed more punch than Bristol.

However, there has been a bit of a question-mark about the Wasps pack in recent seasons – and while they were too good for the Bristol forwards at the Ricoh, the Bears are nowhere near the proposition up front that Exeter are.

Even so, Wasps have a number of good things going for them, with Jimmy Gopperth up at the top of the list. I’ve always liked Gopperth, because whether he plays as an inside centre or fly-half he’s a master tactician, and one of the most impressive veterans in the Premiership.

Gopperth is a calming influence outside Jacob Umaga, who is a young, ambitious 10. I like the way Umaga’s prepared to back himself and have a go. I’ve noticed he tends to berate himself a bit when it doesn’t come off as he wanted, but with the experience of Dan Robson at scrum-half inside Umaga, and Gopperth on his outside, Wasps have a good balance.

Robson has been as good at 9 for Wasps as Ben Spencer has been for Bath, which is a pretty strong recommendation, and I’m looking forward to the contest with Exeter’s 9-10-12 line-up of Jack Maunder, Joe Simmonds and Ollie Devoto.

I rate Blackett. After joining Wasps a few years ago he made an instant impact in attack, and even though they have had their inconsistent streaks since then, they have maintained that reputation for scoring tries – although usually it’s not been matched by their ability in defence to keep other sides out.

They showed against Bristol that they have sharp finishers in their back three like Matteo Minozzi, Josh Bassett, and Zach Kibirige – but how much of the ball they get to see will depend on how the Wasps pack perform.

Kieran Brookes is a Test tighthead, and we know that at his best he’s pretty good – although he’s lost out in the international rankings to younger guys like Bath’s Will Stuart, who are like he was three years ago. One of the big questions facing the Wasps pack will be whether Brookes has got enough in him to trouble the Chiefs loosehead, Alec Hepburn.

The Wasps forwards go into the game with nothing to lose, in the sense that Exeter have the pack with the bigger reputation. For instance, at one stage Wasps hooker Tommy Taylor had a reputation for being a bit of a ball-carrier and handy around the field, and he’s got to make sure that’s the first thing we notice rather than his long, fair hair.

The Wasps pack will realise that Bristol are not renowned for massive ball-carrying strength up front, and that Exeter are in a different league in that area. But with the PRA Player of the Year, Jack Willis, in their back row they will also believe they can disrupt the Chiefs’ monopoly of the ball.

When people think of Wasps this season they think of Willis – the bloke with twice as many turnovers as anyone else, who can wreck another team’s momentum. All Wasps have to do against Exeter is to stop them getting within ten metres of their line, because if they do the quality of their pick-and-drive technique means there is nobody better at scoring close-range tries.

Wasps must somehow stop Exeter’s control of possession and territory, which is easier said than done. But at least they know what they are up against, and with flankers like Willis and Thomas Young looking for turnovers – and the rest of the Wasps pack also having a go – they have an outside chance.

There are signs that Wasps are becoming smarter on the counter-attack, with their defence against Bristol showing an improvement in soaking up attacking phases, and then striking as soon as they forced an error.

Wasps will be hoping that Malakai Fekitoa recovers after going off with a groin injury against Bristol, because the All Black centre has been key in defence – and you

wouldn’t want to soak up too much from Exeter. Their attacking waves just keep coming, and they back their fitness to keep building intensity until the opposition cracks.

Exeter have also developed new dimensions to their game which make them more dangerous. Instead of just setting up base camp in the opposition 22 and hammering away, they can now go from anywhere on the pitch with backs of the attacking ability of Henry Slade, Joe Simmonds and this season’s new signing, Stuart Hogg.

I think that for most of this campaign Exeter have been 20 points better than every other team in the Premiership, but it is brilliant that Wasps are in such good form, and for that reason I don’t believe the final is a foregone conclusion.

Exeter will be hugely motivated after losing last year’s incredible final to Saracens. The Chiefs are a very good team, who have acquired a great deal of cup final experience over the last six years, and have a very good coach in Rob Baxter.

Wasps have the incentive of wanting to make up for their narrow extra-time loss to the Chiefs in the 2017 final, and if Exeter go behind in the same way they did against Toulouse in the European Cup quarter-finals, then Wasps might be a side which can go up the gears to take advantage. Wasps will relish being underdogs, and imagine the sense of achievement they will feel if they overturn the champions-elect.

Wasps are on a high, and, despite the Covid scare they have had, they should be buzzing. They should be aware already that, more than against any other side, they cannot concede territory and give easy ball to Exeter – because if they have a bad day they could lose by 30 points.

But if both teams have a good day, Wasps have great try scorers, and if Gopperth keeps the scoreboard ticking over, they could do it. This season the stats tell us there is very little in it in attack. Exeter have scored 83 tries to Wasps 81, whereas Wasps have 12 bonus points to Exeter’s nine.

For Wasps to win, they will have to play their best game of the season, but anything short will mean that they are on the receiving end. Exeter are not so good that they are not beatable, because no side is, but they are not far off.