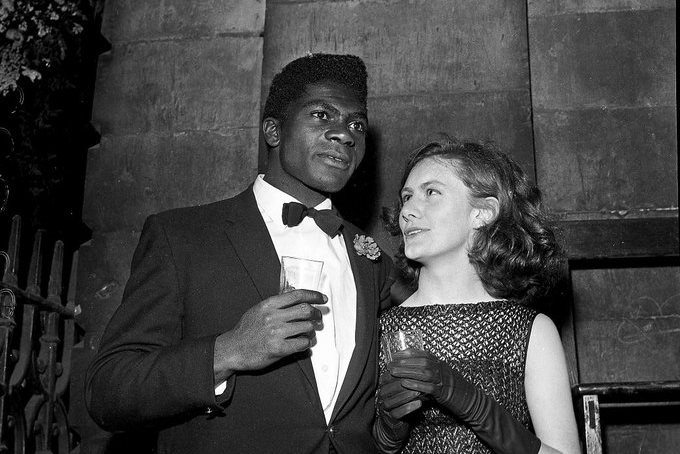 In the spirit of inquiry Rugby Matters is diving into the largely untold stories of pioneer black rugby players this month – Black history month – and former Quins wing John Coker, a charismatic figure who has a fascinating tale to tell.

Coker was the first black player to play in the Varsity match, in 1965, and a couple of weeks later became the first player to represent Harlequins, a club that, subsequently, was to have a record second to none in developing promising black players.

A big unit for a wing in those days – 6ft 1in and nearly 14 stone – Coker had plenty of gas when required and was an outstanding boxer who fought over 80 amateur bouts. For a number of years he was a highly sought-after sparring partner for Henry Cooper and Billy Walker. These days he would be box office to say the least.

In rugby terms, Coker is often cited as the one who ‘got away’ for England, the individual who should have been England’s first black player since James Peters in 1905. But in fact, as he revealed to me this week that was never really an option. There was no boycotting him because he was black.

Although technically dual qualified after living most of his life in England, he had boxed as a heavyweight for Sierra Leone at the 1966 Commonwealth Games – or rather he tried to box at Kingston, Jamaica more or which anon – and was the Sierra Leone flag bearer at the 1968 Olympics when he again contested the heavyweight title. He had made his choice of nationality and stuck with it.

John’s family had relocated to England when he was young and he learned his rugby at Fyling Hall School just outside Robin Hood’s Bay before joining the Gosforth club where he came under the influence of his lifelong rugby mentor Arthur Smith, the Scotland and Lions wing.

A considerable academic, he then spent four years at Trinity College Dublin studying economics and politics and carving it up on the rugby pitch, before he switched to Oxford for a post graduate year where he bumped into lifelong friend Bob Hiller.

Coker says: “Bob was a great player. Like me he was up at Oxford for a year; we clicked immediately and we played together for the rest of our careers at Quins. We had this arrangement, I would do his tackling and he would do some of my running!

“Myself and John Cox, the other wing at Quins, did very well out of Bob. Whenever he lined up one of his famous long drop-goal attempts we would start sprinting hard for the corners. Occasionally Bob would land an amazing kick from 50 yards or more but more often than not it ended up nearer the corner flag and we would catch the opposition ball-gazing and touch down. Great days.”

Coker was approached by Quins by no less than Wavell Wakefield at Oxford’s final warm up match before the Varsity game at Blackheath and he caused considerable carnage on their left wing for five seasons or so before work commitments affected his availability. There were almost no black players at senior level at the time so was there any racism?

“I can only really talk of my times and I suppose I was a novelty more than anything but hand on my heart I can say I never experienced any racism at any of my clubs – Gosforth, Trinity College Dublin and Quins. None.

“I never sensed any tension or undercurrents, they were incredibly happy days. Quins, along with my wife, has been the one constant in my life, totally supportive. There was some jocular banter occasionally but there is a place for that and I enjoyed it greatly. Welsh players, Scots, Irish, those with ginger hair, those who have put some weight on, those with posh voices. They came off much worse than me.

“Occasionally at other clubs, among the crowd, I might hear somebody mention ‘that big black bastard on their wing’ but to be honest even that was said in a fairly friendly way, even admiringly. At the very least it meant I had made an impression and they were perhaps a little frightened of me which I relished. I was a strong bloke, a boxer, I was frightened of nobody.”

Yes, that boxing career. Incredibly he didn’t even get to box at Kingston in 1966 when, with his background of sparring against top professionals, he was tipped for a medal. On presenting himself ringside for his first fight the officials could not find a pair of gloves to fit his admittedly enormous bucket-sized hands. In particular his thumbs were incredibly long.

Boxers of course were not allowed to supply their own gloves and somehow the message hadn’t got through to the organisers in Jamaica. Unable to get his hands in the regular ‘large’ gloves and close his hand to make a legal fist, he was summarily disqualified without throwing a punch.

Two years later at the Mexico Olympics he at least made it into the ring – the Mexicans had got the written messages about gloves – but lost by a unanimous points decision to Ion Alexe, a very useful Romanian who lost to George Foreman in the next round but took silver at the 1972 Olympics in Munich.

Mexico, of course, was when the black power movement, epitomised by the clenched fists of Tommy Smith and John Carlo, came to prominence but its impact was largely lost on John.

“You find yourself in your own bubble at a Games, I was thinking of nothing but boxing. In those days there was no social media, you had no idea how big the story was playing out in newspapers around the world, you didn’t get to see English-speaking newspapers. We weren’t down at the athletics stadium. Occasionally you might see some footage on Mexican TV but it was only when I got back to the UK that I fully appreciated what had taken place.”

Going hand in hand with John’s sporting career was a considerable parallel career as a BBC producer although initially he started as a sports reporter with ATV where former England football captain Billy Walker was another much respected mentor.

At the Beeb he worked on most of the flagship TV and radio programmes – Today, PM, World at One, the 9 o’clock news, Panorama – and got to meet many of the big name politicians not least Margaret Thatcher, whose husband Dennis he already knew well.

Coker, now 80 and living in Kew close to the London Welsh ground, says: “Dennis was a really good referee on the club circuit and ran the line at a few internationals, but for me he was always the man who forgot to send me off! Let me explain. We were at London Welsh one day and one of their dazzling backs stepped me on the inside, did me all ends up, and I desperately hung my right arm out and coat hangered him with a stiff arm tackle. Clear sending off.

“It all kicked off, there was some argy bargy amongst the forwards, some of the crowd weren’t happy and the player needed quite a lot of treatment before getting back on his feet. There was a long delay and eventually, to my surprise, the game was restarted with a penalty to London Welsh with me still on the pitch.

“A couple of minutes later there was a reak in play and Dennis spotted me and there was an hilarious moment when he realised he had forgotten to send me off. I think he was about to rectify that when our skipper Grahame Murray stepped in and explained that as play had continued, he couldn’t retros- pectively send me off. I have no idea if that is correct but Dennis was convinced.

“I was never a great drinker but myself and Dennis had a laugh about it in the bar afterwards and it was always a good ice breaker years later when I called in to arrange an interview with his wife!”