Posted on 15th October 2020 by admin in Columnists, Features, Nick Cain with 0 Comments 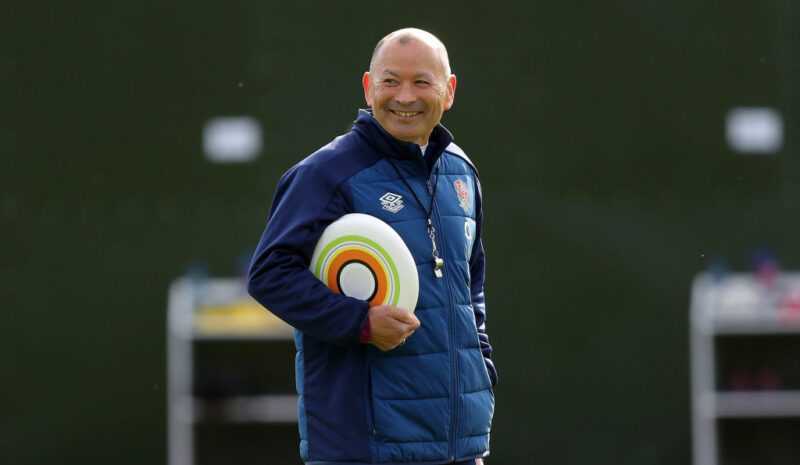 THE Eddie Jones mission statement as he delivered his first, provisional, England squad following the lockdown restart this week was that he wants to put a smile back on the face of English rugby during a period in which it has been battered – along with the rest of the country – by the Covid storm.

Jones is not usually one for understatement, and, with the Sale coronavirus fiasco fresh in everyone’s minds – along with the distress of Sale DoR Steve Diamond – if he used the ‘smile on the face’ message once he used it five times in a brief Press conference, as he answered questions on his 28-man group.

This included a contingent of 12 uncapped players, and with only six Premiership clubs from which to choose due to the semi-final play-offs, and Sale and Worcester ruled out by pandemic restrictions, the selection for the three-day camp at the Lensbury Club last week had a musical-chairs feel to it.

The uncapped crew, which consisted of tightheads Joe Heyes (Leicester) and Simon Kerrod (Harlequins), locks David Ribbans and Alex Moon (both Northampton), back rowers Alex Dombrandt (Harlequins), Lewis Ludlow and Jack Clement (both Gloucester), and backs Alex Mitchell and Fraser Dingwall (both Northampton), Ollie Thorley (Gloucester), Nathan Earle (Harlequins), and Ali Crossdale (Saracens), have every likelihood of finding they no longer have a seat when the music stops.

That will be imminent, because Jones will be homing-in on his squad for the final 2020 Six Nations Test against Italy in Rome on October 31. So, given the number of invitations in the past four years which have been issued to players who have not featured in Jones’ plans since, I asked whether the England boss ever told the uncapped hopefuls they might not be required again for some time.

He played a blocking shot, and said: “England selection is always about performance, so they have got the opportunity to either put themselves in a better situation than they are at the moment, or in a worse position. That is the great thing about a camp like this – opportunities are there for young players to do well.”

Jones added that having travelled 8,000 miles in the last couple of months watching Premiership and European games, he had a good idea of who he wanted to look at.

However, he added the critical proviso that their club form was just a chance to get a foot in the door, saying, “the real selection test is once they come into camp and have to compete and play at an international standard – so we’ll just wait and see”.

Given that established England players are very familiar with Jones and his coaches, and their methods, whereas most of the new boys are not, there is a sense that the likes of Dombrandt – whose club form suggests he should be pushing Billy Vunipola hard for the No.8 jersey – might be facing a bit of a stacked deck.

The likelihood of not seeing many new faces was reinforced by another Jones statement: “I’ve been very consistent in selection over the last four years, and I don’t anticipate any change, which is picking the best 23 for every game. Our responsibility is to put a smile on people’s faces, and I know that the best way to make people smile in England is when we win. Our number one priority is to win, and number two is to keep developing the squad and making it stronger.”

While the priorities listed by Jones make perfect sense, the same cannot always be said of his selection methods. Like all teams that aspire to be the best, there is a requirement to be adaptable in case your Plan A comes unstuck, as happened to England in the 2019 World Cup final. This means having a Plan B and probably C.

It is an area in which England struggle, and although they have become a very difficult side to beat with Jones as coach – mainly because their Plan A is often highly effective – they have also developed a habit of losing title-winning matches because of an inability to switch tactics when Plan A stalls.

The most recent evidence of this was the post-World Cup loss to France in Paris in February, which means that England’s imminent trip to Rome will not be for a Grand Slam. Yet, following Manu Tuilagi’s Achilles heel injury, it is a safe bet that Jones will revert to the George Ford-Owen Farrell 10-12 combination, with Henry Slade starting at 13.

Jones said that without Tuilagi’s gain-line power England had lost the focal point of their attack, but added, “we’ll move on and find other alternatives and other ways of playing”.

The drawback with the Ford-Farrell combo is that while they are both proven playmakers at Test level, neither is a clear running threat – and this imposes limitations on England when it comes to developing Plans B and C.

This is why it is strange Jones has not made greater use of his provisional training camp to focus on the midfield, and the new options available to him.

I cannot see why he would not have a midfield hothouse within the camp, bringing in form players like Worcester’s powerful centre Ollie Lawrence (Covid clearance allowing), and hugely promising Saracens centres Dom Morris and Charlie Watson, to see how they fared alongside Ford, Farrell, Dingwall and Joe Marchant.

Talented new players judiciously blended into the mix, challenging for places, gives you the option of finding the new dynamics to make Plans B and C a reality. That would make England fans happy. And what better way is there for a head coach to gauge their relative strengths than to have them all in the same training pool?