Home / Features / Ollie Devoto the new Will Greenwood? There is still time to find out

Ollie Devoto the new Will Greenwood? There is still time to find out 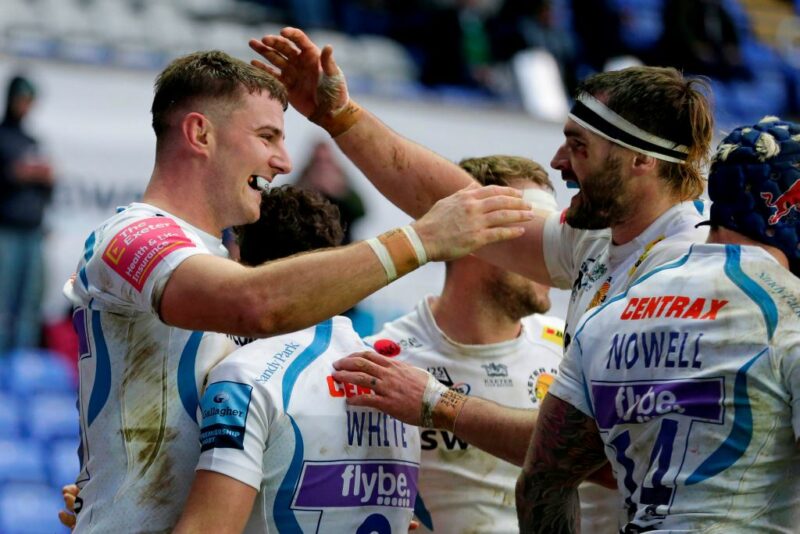 OLLIE Devoto has drawn comparisons with Will Greenwood, the 2003 World Cup winner hailed as one of the best inside-centres England has produced. The similarities between the Exeter Chiefs 12 and Greenwood are striking.

Both are tall for midfield backs at 6ft 4ins, have a similar fighting weight, with Devoto slightly heavier at 16st/102kg, and hold in common the priceless gift of opening up gaps with gliding running and defence-shredding dexterity in their passing.

Should Devoto, 26, win selection in England’s 2023 World Cup squad, by which time he will have just turned 30, he will be a year younger than Greenwood was when he won his World Cup winner’s medal in Sydney.

It is notable also that Greenwood flagged Devoto, then with Bath, as a centre to watch in 2014 in his role as a TV rugby pundit. He said: “This kid could come with a charge for the 2015 World Cup – he’s absolute class, can distribute off both hands, and is as good a young centre as I’ve seen for a long time.”

Where Devoto’s and Greenwood’s careers have diverged is not so much about when they were first capped by England – Greenwood at 25, Devoto at 23 – as the regularity with which they have been selected.

Greenwood was barely out of Clive Woodward’s England side, and from 1997 to 2005 played 57 Tests, starting 51 of them. By contrast, Devoto has yet to play in a World Cup, despite being first capped by Eddie Jones off the bench against Wales during the 2016 Six Nations Grand Slam. Since then he has hardly had a look in.

He had to wait four years for his second cap, when, this February, he came off the bench in the loss to France in Paris – and, despite being in the 2019 World Cup training squad and 2020 Six Nations squad, so far, that’s been it.

The truth is that Greenwood was not only a gifted playmaker and try scorer – he is still second equal with Ben Cohen in the England top try scorers table with 31 – he was also in the right place at the right time. Devoto, on the other hand, has had a couple of massive roadblocks in his way at international level.

The first was the presence of Owen Farrell at 12, with Jones, opting for the 10-12 hinge of George Ford and Farrell at the start of his tenure. The second has been the return of Manu Tuilagi from long-term injury, and his immediate reinstatement in the England midfield since autumn 2018 at either 12 or 13.

Tuilagi’s impressive World Cup form reinforced how important he is to England, but there is also no ducking that he is 29, and has had a trail of serious injuries. Tuilagi will be 32 before France 2023, and Devoto, although not offering like-for-like in terms of sheer line-breaking power – who does? – brings not only physical presence, but guile.

Devoto also offers Jones the enticing prospect of a well-honed 12-13 club partnership with Henry Slade, which has helped to propel Exeter Chiefs to the top of the Premiership tree.

Devoto’s enthusiasm for playing alongside Slade is obvious, especially as they had a similar journey in their early years as pros, both bouncing between 10 and 15 before settling at centre.

Devoto says: “He is lucky that he is talented enough to play all those positions so well, but he has established himself as one of the best international centres in recent seasons because of his consistency in big games. So, to partner him is pretty cool.

“There was a culture not so long ago of centres going into gyms and seeing who could lift the heaviest weights, but he is more about being a natural athlete, with great ability to catch and pass as well as kick off both feet.”

When I mention the try Slade set up for Jonny May against Australia in the World Cup quarter-final, thanks to a pinpoint long diagonal grubber while running at full tilt, Devoto responds: “It is that sort of stuff that goes unnoticed some of the time, but he has done it at the Chiefs for years, and he makes it look easy.”

Devoto has the same facility to hit the spot when it comes to offloading out of the tackle, highlighted by a brilliant backhand scoring pass to Joe Simmonds in last year’s European Cup tie against Castres.

Since then he has hit an upward trajectory, causing Saracens all sorts of headaches in last season’s epic Premiership final, before carrying that form into this season during the Chiefs table-topping run pre-lockdown.

So, why has Devoto been in and out of England’s plans over the last six years, and had to wait four years between appearances as a replacement? Is it injury, lack of consistency, or depth of competition?

Devoto’s answer is candid: “It’s been a combination of all three. I’ve had my fair share of injuries, with shoulder and neck issues, and it was consistency too. The feedback from England was that I needed to be more consistent – so, with all of this, you have to look after what you do with your club before anything else.

“Being involved in those big finals, confirming the Chiefs as one of the two best clubs in the country, by winning the Premiership in 2017, and then the losses to Saracens in 2018 and 2019, is important.”

Devoto says it is also crucial that Exeter take the next step, fulfilling their promise by becoming English champions again, and pushing for a first European Cup crown – and it explains his eagerness to hit the ground running following this week’s return to contact training.

“It’s been good. The first day of Level 2 training was almost as if it was back to normal. The view of the coaches is that we can certainly get up to speed quickly. It’s possible, because we’ve been running for three weeks together as a club, so we’re fit, and before that we kept ourselves in condition with our own programmes.”

He adds: “We were pretty hurt with the loss to Saracens last year, and having won the league outright a couple of times it was pretty hard to take. We are in a good position at the top of the league, and in Europe we know there’s a lot of hard work still to be done. But it is those who use this weird time best who will be at an advantage – and we can’t wait to get going.”

Devoto says he has to keep honing his own game at 12, and that he uses the time he has spent working alongside Tuilagi in the England squad as motivation.

“Seeing how Manu goes about his training, and what he gives to England, has been very beneficial to me. His ability to get over the gain-line is so important. It is such an advantage, and at international level it is huge, because defences are so strong that it is difficult to achieve. I have a lot of work still to do on my carrying game, whereas he is one of the best in that department, but perhaps where we differ is distribution – although where I have to get it right is doing it from an aggressive carry.”

Devoto believes that his move to Exeter from Bath four years ago has given him the ideal environment in which to progress.

“The Bath squad was strong, and, with Kyle Eastmond and Jonathan Joseph at centre, as a youngster out of the academy you had to fit in wherever you were needed. I didn’t mind, because moving around the backline as a young player was in many ways a real benefit.

“But when I decided I really wanted to play centre, I had a chat with my dad. He said you can stay and become a squad player, and fill in the holes, or go elsewhere to get a starting place. I don’t look back with anything but positives from my time at Bath. We were one of the two best teams in the Premiership in 2015, and although we lost the final to Saracens, I loved the style of rugby we played. But I really didn’t want to be a squad player, and I wanted to really go for it, so going to Exeter made sense.”

The move dove-tailed with Devoto’s call up to the England U20 side that became the first to win the World Junior Championship in 2013, and he says that playing with a handful of Exeter’s brightest young stars paved the way for his move to Sandy Park.

“It was an incredible experience, and playing alongside Henry Slade, Jack Nowell, Sam Hill, Luke Cowan-Dickie and Alec Hepburn in that tournament made my transition to Exeter much easier. I knew them well – and Jack was on the periphery of the England team even then. So, I knew there was potential, and because all of us were the same age there was a good chance that we could grow together.

“The only game I didn’t feature in was against New Zealand – which I was pretty fed up about. The final against Wales was pretty close, and I was on for the last 15 minutes at full-back, and felt fully involved all the way through. You make friends for life in teams like that, and there are some of them who play part-time now that I still keep in touch with regularly.”

Devoto talks about the bond between players as an important component in his rugby life, and he explains it in further detail when asked what he most likes about the Exeter environment.

“The lads. Everyone sees you as a team for 80 minutes, but it is what we players do off the field, outside training that makes such a difference. We are all mates, and that camaraderie means you know you have back-up when things don’t go well. We are very tight off the pitch. It’s rare that you can call your work-mates your best friends, but that’s how it is at the Chiefs.”

He also pays tribute to the Exeter coaching team, and in particular head coach Ali Hepher, below left:  “He has had a huge impact on the way I look at the game. I came to Sandy Park as a 10 or 15, and now I’ve established myself at centre. My carrying ability has come on leaps and bounds, and now carrying aggressively is something I can add to the team.”

Aggression matters, but so does a cool head and a balanced perspective, and Devoto can claim all three. He says: “I’ve still got a burning desire to play for England, but I’m not bitter that I haven’t had more caps. I’ve been involved in the England environment around a Grand Slam and a World Cup, and have taken from that what I need to do.”

Devoto adds: “I’ve been involved in training with the best players in England, and my attitude is that if I keep playing well for the Chiefs then anything can happen.”