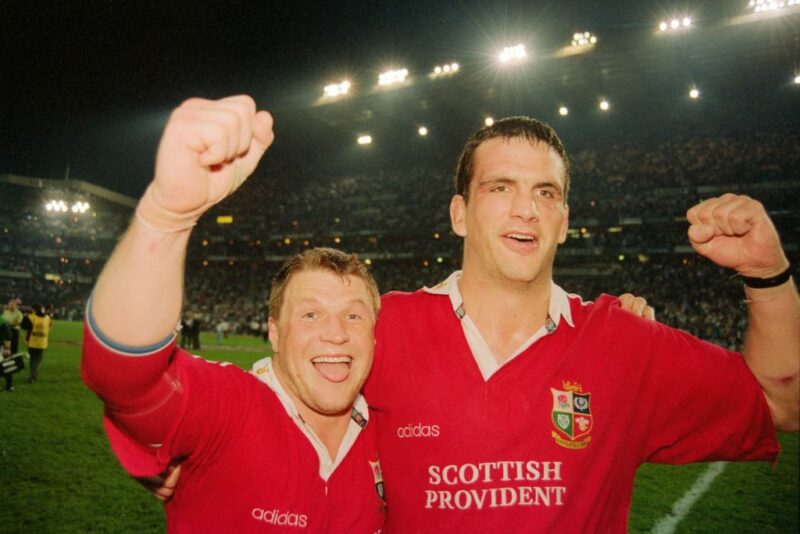 The excitement built for months and all that pre-match week as the Lions fans arrived in their hordes, historically the first major gathering of the Red Army, a mass invasion we now take for granted every four years. The look of shock on South African faces at the midweek game against the Junior Springboks when thousands of singing Lions fans descended on unsuspecting Boland Stadium, Wellington for the day was priceless. This was different gravy.

It is also the date that I believe the Lions probably won the Test series even if the record books will tell you that actually came seven days later when Jerry Guscott popped over that cheeky little dropped goal at King’s Park Durban.

Whatsmore at least one person – Martin Johnson – agrees with me so that’s enough encouragement to at least state my case before ducking.

Johnson still comes out in a cold sweat at the moment in question and the realisation about what fine margins operate in international sport. Fame and infamy, victory and defeat, success and disaster often walk hand in hand.

After an uncertain start in the first half, the Boks were really cranking it up after the break, finally looking like the world champions they were. It was beginning to look grim.

They had powered their way into a 16-12 lead when Russell Bennett appeared to race in for the Boks third try and his second try since coming on as a replacement after half-time.

Bennett was on fire and you could see why most South African journalists were tipping him as the long term replacement for the great Andre Joubert. Within weeks though Percy Montgomery – who had looked some way off being a world beater in that Junior Springboks game – got the nod and the rest was history. Life is like that.

Anyway back to Newlands. Time seemed to stand still after Bennett dobbed down for his second try in ten minutes before eventually New Zealand referee Colin Hawke pulled him back for a marginal forward pass, the sort you see allowed every week. Indeed Neil Jenkins’ pass to Alan Tait for the Lions winning try 25 minutes later was every bit as ‘flat’.

Now, as you know, I am a complete pedant when it comes to forward passes and their proliferation which totally undermines one of rugby’s founding principles – that the ball should not move forward from the point of delivery when passed – but watching live I had no issues with the try. Nor had there been a whimper of protest from the British and Irish contingent in the Press box, just groans of disappointment.

The Lions definitely dodged a deadly bullet there. Would the Lions have bounced back from 23-12 down? You wouldn’t entirely discount it from such a spirited, talented, side but my gut feeling is probably not. And that would have changed the entire dynamic of the Test series.

The Boks had been nervous ahead of the series. They weren’t quite sure what to expect from Ian McGeechan’s Lions and, in particular, their Rugby League contingent, and South Africa had been frenetic if dominant up to that point of the match. The luxury of an

11-point lead might have seen them settle and produce the devastating attacking game of which they were capable.

Instead the disallowed try seemed to deflate and agitate the Boks unduly. They needed that buffer for their confidence and having been denied it they became panicky and fretful.  “We were hanging on by a thread,” admits Johnson. “They were enjoying all the territory, had just scored their second try and a penalty and then came the disallowed try from Bennett. If that had been allowed they would probably have won the series. You know how close the second Test in Durban was.”

Johnson was phenomenal that day at Newlands – doing the work of two men as first he led the resistance and then a mighty Lions resurgence. It was surely his finest moment. He was the living, breathing, embodiment of Jim Telfer’s Everest speech just a few hours earlier. Some TV producer should put together a montage matching his efforts with Telfer’s words.

In the meantime, fix Johnno in your mind while reading the meat of Telfer’s classic pre-match speech. Apologies for the surfeit of asterixis but it wouldn’t be the same without them!

“They don’t respect you. They don’t rate you. The only way to be rated is to stick one on them, to get right up in their faces and turn them back, knock them back. Outdo what they do. Outjump them, outscrum them, outruck them, outdrive them, out-tackle them, until they’re f***ing sick of you.

“You are privileged. You are the chosen few. Many are considered but few are chosen. They don’t think f*** all of us. Nothing. We’re here just to make up the f***ing numbers. No one’s going to do it for you. You have to find your own solace – your own drive, your ambition, your own inner strength, because the moment’s arrived for the greatest game of your f***ing life.”

It does it for me. Yes, June 21 is a date that fires up some remarkable rugby memories and I haven’t even mentioned Matt Dawson’s dummy yet.