Posted on 20th May 2020 by admin in Columnists, Features, Peter Jackson 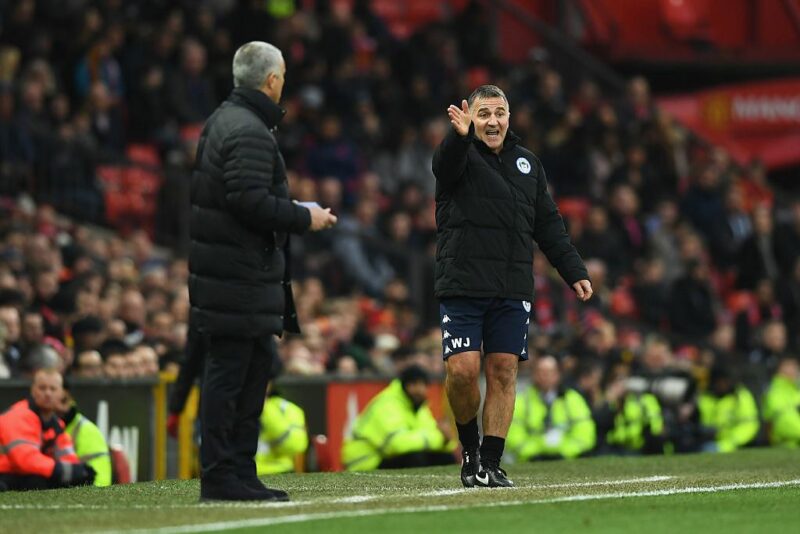 One was the best line-out forward Wales never had, the other an English centre with the potential to have out-goaled Jonny Wilkinson and Owen Farrell.

One grew up in a corner of East Wales inhabited by some of the grizzliest old Lions in captivity, the other in the Rugby League heartland centred around St Helens. Their paths crossed at Twickenham on a Wednesday afternoon almost 40 years ago, on the occasion of an U16 schoolboy international between England and Wales.

Andy Dibble and Warren Joyce have a lot more in common besides their age, 55. Outstanding all-rounders, each had been tutored by a famous rugby master: Terry Cobner of Pontypool, Wales and the Lions in the red corner, Ray French of St Helens,England and Great Britain in the white one.

Cobner taught Rugby Union at Llantarnum Comprehensive, French taught both codes at Cowley High School in St Helens. What happened at Twickenham on March 25, 1981 reinforced the convictions they held about their respective protégés.

“There was not the shadow of a doubt that Andrew Dibble would have played for Wales,’’ Cobner says. “From the very start he had the Wales No.5 jersey written all over him. He was so good that he could also have played at the very highest level at six or eight.

“I remember really well the first practice session. For a lot of the boys it would have been their introduction to rugby so you got used to seeing the ball thrown into a line-out and hitting one of the second rows on the head.

“‘Dibs’ was so poised and confident in everything he did. He had that lazy leap and an ability to hold his jump. He was a genuine athlete. Seeing him jump for the ball the very first time, I thought: ‘This kid’s got it.’

“He had the physique, he was then about 6’2, but he also had gentle hands. Of all the outstanding schoolboy players throughout my teaching career, in England as well as Wales, I’d put him at the top.’’

Joyce, undaunted by neither the occasion nor the magnitude of Twickenham’s acreage, kicked two prodigious penalties from 60 metres which kept England in a match they ultimately lost, 14-10. The goals reaffirmed French’s opinion.

“Warren was the best kicker of a ball I’d ever seen in all my years watching rugby,’’ he said. “I’d never seen anyone convert so many tries from the touchline. He was terrific, a tremendous rugby player.’’

Had their respective mentors been granted their wish, Dibble would have joined Pontypool, Cobner’s old club with a record second to none in the early Eighties. Warren would have joined the production line from Cowley to St Helens Rugby League club.

Instead both made their mark in a different theatre, as professional footballers. Each went on to win big matches at Wembley; Dibble with his goalkeeping heroics when Luton Town came from behind to beat Arsenal in the 1988 League Cup, midfielder Joyce six years later for Burnley in their Second Division play-off final win over Stockport.

Dibble, whose nomadic career has turned full circle with his return to Cardiff City as goalkeeping coach, has no reason to regret his choice. “I was fortunate enough to play rugby and football,’’ he says. “At Llantarnum, we weren’t allowed to play football.

“The joke was that if you were caught kicking a round ball, you’d get the cane. I never took a chance on that so I played rugby on Saturday morning and football in the afternoon.

“Terry Cobner was brilliant, well respected by everyone, a winner who demanded the highest standard. For a while I was torn between the two sports.

“Football gave me the chance of a career. Rugby then was still amateur. The school knew I was training with Cardiff City and ‘Cob’ said to me one day that I could have a career through rugby. I still love my rugby and I admire the players greatly.’’

Like Dibble, Joyce also came from a football family, his late father Walter having broken into Burnley’s formidable team of the early 1960’s. “Warren was a superb soccer player even though we were a pure rugby school,’’ says French. “If you lived in Wigan, Warrington or St Helens, rugby was the game, not football. Dads wanted their lads to play rugby.

“Warren was short, squat and powerful, a clever, bright lad. He would have been a superb rugby player but his heart was in football.’’

As a cricketer, Joyce promised so much that at 15 Lancashire picked him for their Second XI alongside such likely lads as Neil Fairbrother and Steve O’Shaugnessy.

Within two years, Joyce was playing for Bolton Wanderers at the start of a road that led to his management of Manchester United reserves under Sir Alex Ferguson.

Dibble thinks he may have bumped into his old Twickenham opponent during the late 90’s when Joyce was at Hull but cannot be sure as to exactly where and when.

The unique nature of Andy Dibble’s treble has never been in doubt: beating England at Twickenham, Arsenal at Wembley and winning the Scottish Premier League with Rangers.