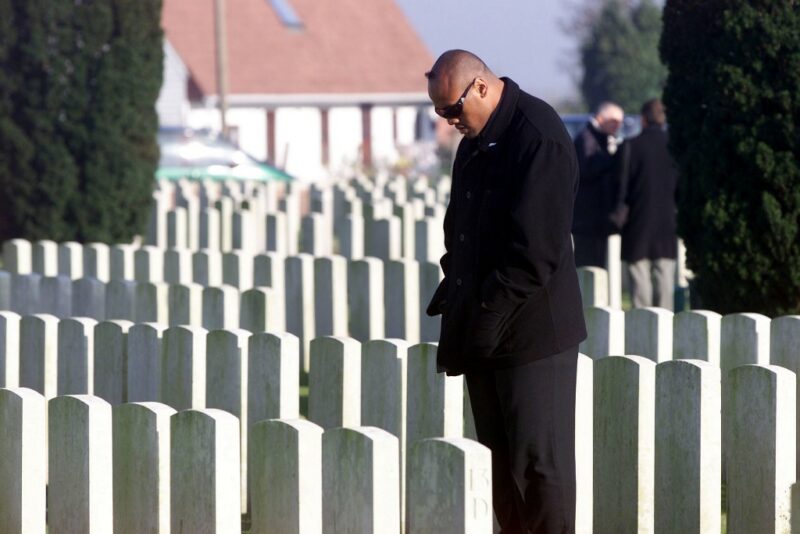 FOR three decades or more before 1914 the young men of Britain and its extended Empire had been fighting generally good natured battles against each other on the rugby field – “sport is war minus the shooting” as Orwell once famously observed – but with the outbreak of World War One life suddenly became deadly serious.

As some of the fittest, strongest and most able-bodied men in the land, rugby players were rightly expected to lead the charge, indeed it was their patriotic duty. Come the moment of truth rugby did not duck that challenge and when the madness ceased that unhesitating call to arms was worn as a badge of honour by the sport.

There had already been a minor dress rehearsal – although it didn’t seem minor at the time – with the Second Boer War, a gruelling conflict in South Africa which had seen legions of rugby players enlist. Two of the four VCs won by international rugby players were awarded during the Boer War.

The rumbustious Wanderers and Ireland forward Thomas Crean, who had starred in the Lions 3-1 series win in South Africa in 1896, was back there just a few years later fighting rather than playing for Britain with Ireland being part of Britain at the time. On December 18, 1901, during the action at Tygerkloof Spruit,

Surgeon Captain Crean, although wounded himself, continued to attend to the wounded under heavy fire at only 150-yards range. He did not stop until hit a second time, when he was seriously wounded.

Meanwhile his Ireland, Lions and Wanderers colleague Robert Johnston had been in the wars as well. On October 21, 1899, at a critical moment at the Battle of Elandslaagte, when the advance was checked by severe fire at point-blank range, Captain Johnston and another officer rushed forward and rallied the men, thus enabling a decisive flanking movement to be carried out. Johnston was badly wounded and was nursed back to health by Crean.

These two and others had set the bar very high for those from the rugby community answering the call to arms in 1914. World War One as everybody was to soon discover was extraordinary, grotesque and highly unusual in many ways – not least the massivley high casualty rate among officers who were required to lead from the front in the trench warfare that developed

This hit rugby – and particularly certain rugby playing schools and their old boys clubs – very hard because although there were pockets of wild enthusiasm for the game among the working class – Wales, parts of the west country and northern England – it was predominantly

A huge number of rugby players were natural officer material while many were also prime candidates for the Royal Air Corp when it was formed. At one stage the life expectancy for a World War One fighter pilot was just under three weeks.

Indeed it was carnage everywhere and Rugby Union lost at least 133 international rugby players from Britain, Ireland, France and the southern hemisphere nations.

Remarkably it was another Wanderers member and Ireland international who was the first rugby international to be awarded the VC in the Great War. Frederick Harvey had played for

Ireland against Wales in 1907 and against France four years later, before concentrating on a military career. He was 28 and a lieutenant in Lord Strathcona’s Horse (Royal Canadians), Canadian Army, during the First World War when he was awarded the Victoria Cross for an action that was both athletic and courageous.

On March 27, 1917, at Guyencourt, France, during an attack by the regiment, the leading troop, commanded by Lieutenant Harvey, had suffered heavy casualties from rapid fire at close range. He was riding in front of his men when he came upon a wired trench containing a machine gun and a strong garrison. He at once swung from his saddle and ran straight for the trench, jumped the wire, shot the gunner and captured the gun.

A fourth international to win a VC, this time posthumously, was England’s Arthur Harrison for his part in the Zeebrugge raid of 1918. He was a promising England forward who had made a big impression in his two appearances in the 1914 Five Nations Championship.

Harrison served at the Battle of Heligoland Blight in 1914, Dogger Bank in 1915 and was mentioned in dispatches at the Battle of Jutland in 1916. It was on St George’s Day 1918 at Zeebrugge, Belgium, that Lieutenant-Commander Harrison was leading naval storming parties when he was struck on the head by a fragment of shell that broke his jaw. Regaining consciousness, he resumed command but was killed soon afterwards. Though in great pain he had continued to press his attack, knowing any delay might jeopardise the expedition.

There were, of course, countless acts of bravery from less exulted but nonetheless enthusiastic rugby players not least from two of rugby’s less well known VC recipients – Sergeant James Youll Turnbull from Glasgow and Private William McFadzean from Belfast – who were among the 19,240 British and Empire troops killed on the first day of the Battle of the Somme in 1916.

Turnbull was a stalwart of the Cathra Queens Park club in Glasgow. A durable forward he was 30 when the war started but at a time when players often retired early to concentrate on their careers Turnbull was a fitness fanatic and first team regular while also starring in the club’s cricket team, being noted for his strong arm.

This particularly came into play when he joined the third Lanarkshire Rifles and later found himself serving in the 17th Battalion, The Highland Light Infantry. Turnbull could throw a grenade further and more accurately than anybody in the battalion and  at least two soldiers were deputed to carry around a supply of grenades for Turnbull to throw during hostilities and it was while hurling grenades that he finally perished on the Somme.

The citation for his VC, recorded in The London Gazette on November 24, reads: “Almost, single-handed, he maintained his position, and displayed the highest degree of valour and skill in the performance of his duties. Later in the day this very gallant soldier was killed while bombing a counter-attack from the parados of our trench.”

McFadzean was a strapping 6ft and 13 stone unit from the Collegians club in Belfast and, like Turnbull, was put to use as a bomber, carrying and using the grenades on the front line. His VC came at 6.30am in the trenches just before hostilities began and the citation for his act of bravery requires no elaboration.

“While in a concentration trench and opening a box of bombs for distribution prior to an attack, the box slipped down into the trench, which was crowded with men, and two of the safety pins fell out. Private McFadzean, instantly realising the danger to his comrades, with heroic courage threw himself on the top of the bombs. The bombs exploded, blowing him to pieces, but only one other man was injured. He well knew his danger, being himself a bomber, but without a moment’s hesitation he gave his life for his comrades.”

And then there are those who probably should have won a VC. They would be headed by Scotland wing, Lieutenant James Laidlaw Huggan,  an RAMC medic who died on September 16, 1914 just hours after demonstrating conspicuous bravery by playing a huge role in saving the lives of 60 wounded German officers who he had found in what appeared to be an abandoned field hospital in a barn.  In the chaos of war, the Germans seemed unaware that the outbuilding housed their own wounded and were bombarding it with shells and mortars.

Disregarding his own personal safety and faithful to his Hippocratic oath, Huggan hurriedly organised the evacuation of the barn as its burning timbers and roof fell to ground.   Repeatedly the young Scot sprinted in and out of the barn ferrying the wounded German soldiers to relative safety and remarkably he and his small medical team saved the lives of all 60 Germans.

Tragically, though, Huggan was then killed when a shell exploded nearby while he was operating on one of the German officers.

Huggan’s commanding officer Lieutenant Colonel G Fielding had no hesitation in immediately recommending his young medic for the VC but was promptly told that Huggan did not qualify because his heroism did not actually involve engaging the enemy and that he had saved the lives of German soldiers, not British or French.