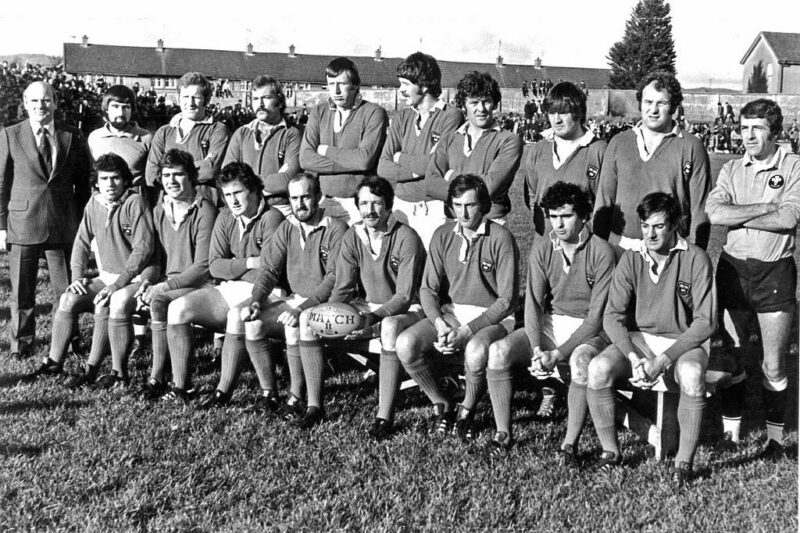 It’s amazing the rugby  stuff there is out there for you to enjoy for free these days on YouTube, if only you had time. Well, now, unless you are one of those heroes making life possible for the rest of us in these difficult times, you might finally have some time on your hands. So  use it.

Half the fun is surfing around and seeing where your fancy takes you, but for starters let me point you in the general direction of some crackers that have begun to appear recently.

First the full RTE coverage of Munster’s famous win over the All Blacks in 1978 – which at one time was thought to be lost – is there in all its glory as is the Rugby Special coverage of the North’s win over New Zealand at Otley the following night. The latter is a bit grainy and dark on occasions in the second half – no lights at a dank Otley back then – but if anything it adds to the atmosphere.

Meanwhile, don’t miss an excellent highlight package of England’s shock 16-10 win over New Zealand in 1973 which features one of the greatest individual performances in England’s history by the late Jan Webster at scrum-half.

The footage also includes one of the dodgiest try decisions you will ever see which just for once went England’s way when Peter Squires clearly and massively knocked on before his touchdown. So a hat-tip to former All Black centre Frank McMullen, who officiated that day.

Marvel also at the quickfire scrum – faffing around hadn’t been invented back then – and admire also prop Fran Cotton’s 50-metre break and dummy towards the end.

Bear in mind, though, that just a couple of months earlier big Fran had captained England to victory in the Scottish Centenary Invitations Sevens, the first global Sevens competition. He could shift.

On the subject of New Zealand, there are now half hour packages drawn from NZTV coverage of all four Tests from the 1971 Lions tour. The third Test is particularly good but pour yourself a stiff drink, you might need it.

The tackling and rucking is absolutely brutal. Amuse yourself counting the number of red card offences by modern day standards.

Meanwhile, if ever you have thought that reports of Fiji’s occasional brilliance on their 1970 tour of Britain were exaggerated, somebody has rescued over 40 minutes of match highlights from their stunning win at Gosforth over a Barbarians side that isn’t far short of the Lions Test side nine months later in New Zealand.  Cliff Morgan is commentating which is an added joy.

An unheralded gem is a series of seven clips, some as long as 25 minutes in length, of Wales’ long-forgotten six match tour of Argentina in 1968.

The picture quality is excellent as is the commentary from the always reliable Alun Williams who was a member of the Gorsedd, operating under the name of Crwydryn (Wanderer) on account of his numerous travels with Wales and the Lions.

This is Wales just before the glory years but there is a young John Williams at full-back before he became JPR, John Dawes at centre and a very young Phil Bennett at fly-half. A back row of Dai Morris, Tony Gray and Dennis Hughes was pretty tidy as well. You will recognise all sorts of names.

Not that Wales had it all their own way. Argentina won the first Test 9-5 and the second Test was drawn 9-9. The Provincial games were very tough and the crowds good. Not for the first time you are left wondering why Argentina weren’t brought into the fold much sooner.

One of the boons with Youtube is that the younger generation can now see actual footage of occasions and events that would otherwise mean little to them.

I was lucky enough to cover Cornwall’s famous County Championship win over Yorkshire in 1991 and the rugby  – spirited, exciting but not of a massively high quality – is what goes down in the record books.

But on the day the rugby was about five per cent of the story and for those wanting to understand what it all meant to Cornwall should dig out  “Cornwall open top bus parade through Truro” – which leaves a warm glow. Don’t be put off by the title, there is also much colour and action from Twickenham as well.

Similarly, everybody has read about Llanelli’s 9-3 win over the All Blacks in 1972, the day they drank the pubs dry and Max Boyce wrote his little ditty: But we all had doctors’ papers, and they all said just the same, that we all had

scarlet fever, and we caught it at the game.

But you can relive it. Just search for “We beat the All Blacks” and for a really rounded look at Carwyn James, the rugby genius who presided over the victory, try “Carwyn James, rugby coach”.

To finish with a few esoteric clips that might tickle your fancy. Type in “Richard Harris, Peter O’Toole and Munster Rugby” and you can be transported back to Twickenham in 2000 with the two legends enjoying a day on the lash in hospitality at the North- ampton v Munster European Cup final. Not to be missed.

Another that caught my eye – and which transports you into another world is “The incredible story of Easter Island Rugby”.

And if you want to keep in shape during self-isolation check out “The perfect yoga moves for rugby players” and “Full rugby stretching with Will at yoga in Surrey”. In no time at all you can be doing the stretches while watching some of the action above.