Home / Features / Columnists / Williams column: Jarrod Evans has the ability to be a star in Japan

Williams column: Jarrod Evans has the ability to be a star in Japan 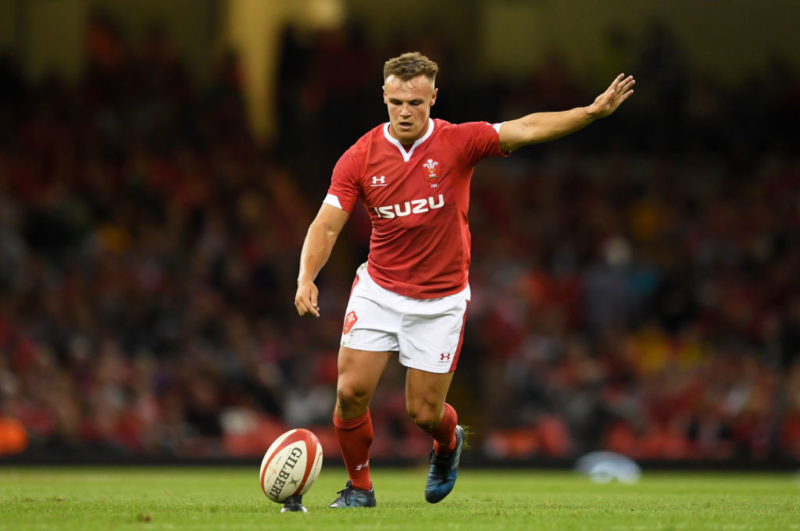 WARREN Gatland names his 31-man squad for the Rugby World Cup today and the first thing to say is that regardless of who is picked, it is a party capable of achieving glory in Japan.

Wales have been superb for the last 18 months to two years and large parts of the squad will have been inked in for quite a while now. Those last few names are always the trickiest.

The biggest selection talking point for me – and the most important – is who Warren takes as back-up fly-half to Dan Biggar. Is it Jarrod Evans or Rhys Patchell? It’s a massive call.

Both players got their chance to impress in the warm-up clash with Ireland and I’ve got to admit I’ve gone back and forth over who is the best option. I’m sure Warren will be torn too.

Dan is clearly No.1 and it’s pretty obvious Gareth Anscombe would have gone to Japan too had he not had that serious knee injury. But one man’s pain is another man’s gain and it has opened the door for one of Jarrod or Rhys to get on the plane to Japan.

Warren revealed last week he is set to take only two fly-halves. That means there will likely be three scrum-halves, three centres, and five back three players.

It makes 13 backs in total with 18 forwards. I think that’s a pretty decent split.

Most teams to have named their squads so far have gone down a  similar path. New Zealand have gone with 17 forwards and 14 backs. England are in the same boat.

The bottom line – as Warren has said – is that you have to take a gamble somewhere in your squad. Whether that’s by taking five props, two fly-halves or only three centres, there has to be a roll of the dice. Big calls have to be made and that’s what the best coaches do. They can’t be afraid to do so.

Just look at the All Blacks. Steve Hansen dropped Owen Franks. That was a huge decision, but it was one Steve must have felt was right for his squad in Japan.

I can’t see any bombshell news like that hitting the Wales squad, but the point is there has to be a sacrifice somewhere along the line for the sake of balance.

Like any Welsh supporter I have my fear over what injuries might strike in Japan. If we lost players like Alun Wyn Jones, Jonathan Davies, Ken Owens or George North, then there will be concerns over whether Wales have the strength in depth to cover for such experience.

Wales have built a strong squad over the last two seasons, yet for a lot of the younger players this is the biggest stage they’ll play on. There will be questions over whether they can handle the pressure.

That is the area where people will be questioning Jarrod. The Ireland game in Cardiff was his first Test start and before that he’d only had a couple of very brief appearances off the bench.

He’s untested at the highest level. That’s not being harsh to him at all. It’s just a fact.

At World Cups you have to hope for the best and plan for the worst. Warren will know he has to plan for Dan falling injured ten minutes into the first game with Georgia.

Of course none of us want that to happen, but it’s a situation you must be ready for. If that were to arise, who would you want guiding the ship for Wales in the rest of the tournament – Jarrod or Rhys? For me the decision will be made based on what type of game plan Wales want to play.

With Dan at 10 you know what he is going to do. He’s come in for some criticism, but Dan is a superb Test match animal and he showed against England he’s our best fly-half right now. Rhys is similar to him in that he’s more of an all-round player whereas Jarrod is a make-or-break option. He plays flat to the gainline, is a superb attacker, and brings others into play.

Does Warren want to play that way? Only he will know. I know a lot of people are calling for Wales to score more tries, but do we really want to get sucked into a try-fest against Australia given all the talent they have? I’m not sure that would be the best move.

I also know from my own experience that you risk playing open running rugby against Fiji at your peril. None of us want a repeat of France in 2007 on our hands again!

Given his lack of experience it would be a huge ask to throw Jarrod into the cauldron of a World Cup and ultimately you are never going to know how he copes until he’s there.

That said – and it’s only a hunch – I think he has the ability to thrive at the top level. Jarrod reminds me a lot of Rhys Priestland.

My view is they are very similar players and when you go back to 2011, Rhys was pretty much thrown in at the deep end in New Zealand.

He’d won only four caps going into that tournament and our first Pool game was against South Africa. That didn’t seem to worry him at all and he took to international rugby like a duck to water. I think Jarrod could have the same impact.

When Priest was playing at his best for Wales – the 2011 quarter-final win over Ireland springs to mind – he helped bring the most out of the players around him. Jarrod can do likewise in Japan and he is certainly a very different option to Dan. Whenever I’ve watched him for the Blues he plays with that little bit of arrogance. It’s not cockiness or overconfidence, but a belief in his ability.

That’s priceless as a 10. You have to have it. Who knows, he could come from nowhere and be a World Cup star. We’ve seen in the past that there can be unlikely heroes at World Cups.

Remember 2011 when Stephen Donald guided the All Blacks to the trophy – he’d been fishing in Waikato just a couple of weeks earlier!

Whoever goes out of Jarrod or Rhys will have my full support and they are both fantastic players, but my belief is Warren will go for Jarrod.

It means there will be only two specialist fly-halves in the squad, but I’m sure Wales will rotate for the Uruguay game in the Pool.

Hadleigh Parkes could play 10 in that one and I’ve read Liam Williams’ name mentioned for that position too – I’m sure he’d do a decent enough job. With the sort of year Liam has had he could probably do a job in the back row and still be man of the match!

While no game at a World Cup is a foregone conclusion, with all due respect to Uruguay Wales could play their third choice and still win comfortably.

Whatever happens and whoever gets selected I am hugely excited by what this Wales squad can achieve. The players that go to Japan have world class ability, experience, the exuberance of youth, and the best coaching team behind them. Go well lads, you can do it!