Posted on 10th July 2020 by admin in Brendan Gallagher, Featured 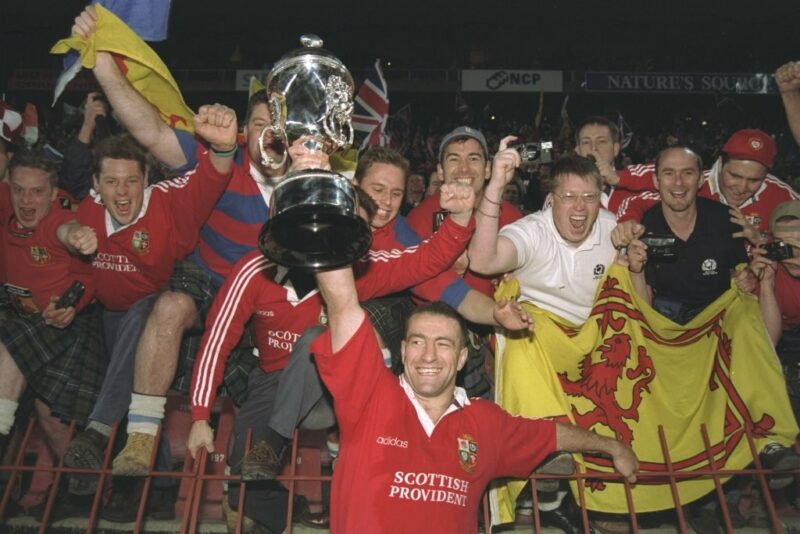 Brendan Gallagher’s overview of the best books and DVDs to be published and produced over the years reaches the No.1 spot. Bookmark these ready for Christmas or an upcoming birthday.

After bringing you Part One yesterday, where Matt books on Matt Hampson and Carwyn James were entries, here are ten more worthwhile reads and viewings.

10. The Final Whistle – The Great War In Fifteen Players  by Stephen Cooper (Spellmont 2012)

A salutary account of Rosslyn Park at War between 1914-18 was the first of its kind in and around all the centenaries connected with World War 1 and remains, by some distance, the best . Cooper homes in on 15 extraordinary stories concerning some of the 350 club members who saw active service. Among those 87 died, two were awarded VCs while 13 won the DSO, 63 the MC, four the DSC, three the DFC and two the Croix de Guerre. There were also another 54 mentions in dispatches.

The award-winning Donald McRae – he has twice taken the William Hill Sports book of the year award – wouldn’t claim to be a rugby expert, the sporting world in general is his beat, but that is the great strength of this book in which he spends the best part of two years roaming the rapidly changing rugby world at the dawn of professionalism. He takes an objective look at club rugby in the north and south; the Lions triumphant tour in 1997 to South Africa where he grew up and rugby was God and also synonymous with apartheid; he tours around Britain and Ireland with the Springboks and Wallabies and then travels to New Zealand and Australia with England and Wales. No avenue is left unexplored and in the company of an expert wordsmith how could you fail to enjoy such an odyssey?

Handsome annual book of record for nearly 30 years with the full collection from 1972-2000 taking pride of place in most rugby fans’ libraries. Many will also have its predecessor, the old Playfair Rugby Annual (1948-73). Between them they still furnish information, stats and reports on games and contests that no google search will ever reveal. Over the years devised the perfect format and a new season was never properly underway until the book launch in September. Mysteriously disappeared with the arrival of the internet.

Wonderfully pithy and indiscreet autobiography penned by the erudite Cambridge, Wales and Lions wing at the age of 28 in the safe knowledge that a lucrative legal career beckoned and if the authorities wanted to punish him so be it. They didn’t. Very open and frank, this book has spawned many memorable lines. It is here that Harding comments that the back division at Pembroke College Cambridge probably ‘cost’ more than Wigan’s back line in terms of scholarships while he also told the WRU that Rugby League was just an infant that nonetheless needed to be strangled at birth!

Universally considered THE rugby coaching textbook and the bible down in New Zealand for decades. Not to be confused with Think Rugby, Greenwood’s follow up book eight years later. This is the more accessible read for the young coach – a degree course in coaching as opposed to the PHD level in Think Rugby. It’s the only coaching book Greenwood’s Loughborough College disciple Clive Woodward has ever consulted and Fran Cotton was also a fan. “Jim was without question the best coach I ever played under and its all here in this book,” insists Cotton. “It was unbelievable that he never got to coach a national team. Essentially it was because England wouldn’t pick a Scotsman and Scotland wouldn’t pick one of their own living and working down in England. So read what he has to say in Total Rugby, really concentrate and don’t let your mind wander because you will become a better player or better coach.”

A Welsh schoolmaster’s love affair with rugby and that ‘Eureka’ moment when he discovered the once-in-a-century talent of Gareth Edwards. This is a beguiling, ageless, rugby classic which you find yourself turning to year after year. Samuel’s pure wonder and excitement on ‘discovering’ Edwards is palpable, but he was such a wise mentor and played a significant role himself although he modestly downplays his imput. The words still jump off the page as we first get a glimpse of Edwards stretching his muscles, testing his speed and endurance. Greatness lay in store and this book captures that beautifully.

The esteemed Sunday Times correspondent in full spate is always a joy and here he is charging in off his long run in this classic delivered on the eve of rugby turning professional. The story has moved on but the prose is timeless. Jones has that priceless ability to convert a full blooded off the top of the head rant into an even more entertaining and enduring passage of prose. Never missed a chance to report on the humour and idiosyncrasy of our game and the book’s title is still relevant. As you may have read in recent weeks Jones passionately believes that rugby must remain a winter game! Or at least steer clear from the height of summer.

By glorious happy coincidence the last of what I would term the old style amateur Lions tours – albeit it was staged in the first season of professionalism – was captured on a wonderfully candid, humorous and often poignant and thought-provoking fly-on-the-wall documentary. There have been many attempts to imitate its intimacy and vibe with the 2009 Lions tour dvd probably being the pick but frankly it remains the benchmark.

It’s all here. Jim Telfer’s blood curdling Everest speech before the first Test; the agony of Martin Johnson getting a jab in his partially dislocated shoulder before every game; Johnno having his bloody eye stitched up in world record time by James Robson midway through the Natal match; Will Greenwood being knocked unconscious at Bloemfontein against the Free State; Bentos (John Bentley) agonising about the forthcoming game sitting on the loo at 3am in the morning; Bentos scoring his wonder try against Gauteng; victory in the second Test in Durban; the various court sessions; big nights in the bars of Cape Town and so on ad infinitum. As somebody who was there the entire eight weeks I can assure you there was little playing up to the cameras – the squad were like that from start to finish.

Extraordinary tour de force by Francophile businessman and, remarkably, first time author Dave Beresford who in one sumptuous tome manages to pay homage to France, the regions of France, French rugby in the 70s and 80s, the landscape, the wines and gastronomy and sing praise to the glories of enduring friendships, forged in the heat of battle.

Brothers in Arms is also about mixing brute force with flair; combining the good the bad and the ugly and going through life together as mates. You can come at this book from any angle. The pure rugby dimension, the human dimension, the French dimension. You most certainly don’t need to be a rugby tragic although that heightens the experience, anybody with a love for the country, its food and its contrasts will glory in this.

It’s a labour of love from a lifelong rugby fan who lived in France for the best part of eight years. Beresford is a talented writer with an intimate knowledge of his subject but the magnificent photographs of Pierre Carton and his modern day updates of the old warriors, are the cherry on top of the cake.

Remains a sporting classic, let alone a rugby gem, as the mischievous Green and illustrator John Jensen take you inside the dysfunctional but hilarious world of the club fourth XV stalwart who possesses much love but little talent for the game. Blood, sweat and beers.

The running total is 24 reprints over the last 50 years – that’s well in excess of 265,000 books – and to this day remains both the template, bible and excuse for 90 per cent of the rugby-playing world.

“I remain mystified to this day about the book’s success, it came from nowhere and teaches you never to give up in life,” mused Green shortly before his death. “I always wanted to pen the ‘great novel’ but I wrote a newspaper article for The Observer about the kind of rugby I played and loved and a publisher phoned me up the next week and offered me a few quid to try mak-ing a book out of the idea.

“I had to bash it out in three months – it was a hack job for 75 guineas to pay a few bills – and all that time I hankered after getting back to my ‘great novel’ and serious laudable writing. It was a chore, you have to work very hard indeed at being spontaneous. There are very few laughs in trying to be funny but to everybody’s surprise it seemed to capture a mood and sold like hotcakes. I thought perhaps I had simply captured a moment, but it went on selling and selling.

“It’s very British and I seriously doubt if the French for example would ever ‘get’ the ‘coarse’ philosophy at all. It’s about losing and being rubbish and incompetent while aspiring to so much more and I suspect only us Brits find that gentle egopricking genuinely funny. Not that we set out to be hopeless, we always tried our very best – which only added to the pathos.”

Green had more clubs than Jack Nicklaus during his itinerant ‘have boots’ will travel career – mainly around Leicester and Northampton.

“At Leicester Thursday not everybody selected was actually meant to be off work and needed to have their excuses prepared so a code was used when the teams were printed in the Mercury which – in the general absence of phones –was the only way to communicate the side. B Jabers at prop was an Irish doctor while T Bone, another front rower, was a butcher in Hinckley.”

The Art of Coarse Rugby was a tough gig to follow but I would argue the three or four rugby chapters in Green’s autobiography Nobody Hurt In A Small Earthquake (William Heinemann, 1990) detailing his time as the Scout at Northampton – the rugby reporter for the local paper – are as atmospheric, authentic and funny as any rugby prose ever written.