Guscott column: George Ford can’t do much wrong at the moment 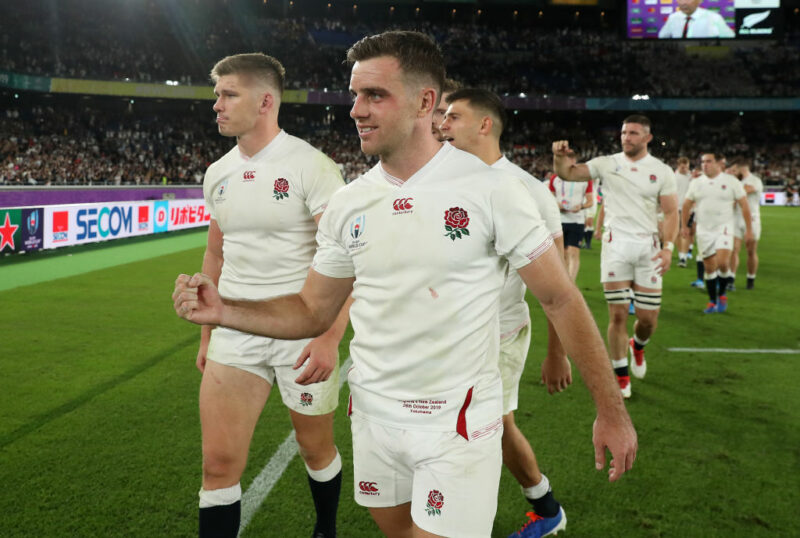 LEADING into the World Cup England had become renowned as a team who start fast, build a lead but then tail off in the second-half following the Six Nations defeat to Wales and draw with Scotland. These last two weekends against Australia and New Zealand have earned them a new reputation.

Beating the world-ranked No.1 side in such style will give them huge confidence for the final. It was a big step up from the display against the Wallabies and, as Eddie Jones said after the match, the challenge now is to improve further for next week’s final. Eddie got his tactics spot on and the players executed the plan from minute one.

Jones took Australia to the final in 2003, helped South Africa win the title in 2007 and then in 2015 with Japan pinpointed specific tactics to win games – it’s a forte of his.

I’ve played in two semi-finals – beating Scotland in Edinburgh in 1991 and then losing to New Zealand in 1995. Winning gives a huge sense of relief because you don’t want to go out at that stage. You don’t get much time to celebrate because you have to get right back on it. After the game players were rightly congratulating each other but that will soon have calmed down and switched focus to next week.

Losing in 1995 was a vile feeling, escpecially as you then have to go and play a ridiculous third/fourth play-off that no one wants to play. Thankfully, England don’t have to worry about that and can focus on how to beat South Africa.

Ahead of the game the majority of people thought there would only be a score in it, and probably in New Zealand’s favour. I wrote last week that if England were to put in 8/10 performances as a collective it would take something special from New Zealand to match it. They did and the All Blacks had no answer.

England’s attacking shape when they get into a strike position is incredibly effective. When they get the ball out to Anthony Watson on the right, with his quick feet, he makes yards before the ball comes back inside. They hit it up a few times with big runners like Mako and Billy Vunipola, or Manu Tuilagi, which narrows the defence and creates space outside.

While they didn’t score from that, the try they did get was similar but from the left flank. They came back in from the touchline with decent offloading to get Courtney Lawes close to the line which allowed Tuilagi to go up against New Zealand’s folding defence and score well. Tuilagi was very impressive again throughout.

England left a couple of chances out there but both disallowed tries were good calls in my opinion. The one ruled out for offside in the maul looked pretty conclusive, as was the obstruction – if Sam Whitelock hadn’t have stepped in on the runner he would have been there to tackle Kyle Sinckler.

Picking George Ford again worked for Eddie. His tactical kicking is excellent  – his all-round form is very good – and much like Tom Curry and Maro Itoje, Ford can’t seem to do much wrong at the moment.

Ben Youngs had another very good game. When he plays well it means his pack has given him a great platform and he’s got more time to kick and pass. But while his kicking was good enough, it’s not always on point.

The only times England looked strained are when there is a bobbling ball or it doesn’t quite go to plan. On one occasion in the second half there was a play down the left-hand side and Youngs picked up from the base and started running across. The guys outside him were expecting a quicker ball. He ran three or four paces and that seemed to stymie the outside players who didn’t react to him. It’s a worry but when you win it’s not highlighted so much. I want to see the players adjust to what has just happened and if those things are worked out England become an even more potent force.

A huge development in this side is that the whole of the England pack now carry well. The front row is renowned for it. Itoje is the most effective runner in the second row but both Courtney Lawes and George Kruis can also do a good job. I’ve written before that I’d like to see Curry run into space rather than at players and he’s doing that, and Sam Underhill is a short, stocky carrier – but in the No.7 role like Curry it’s unnecessary running into players.

Billy had a better game at No.8 and he’s improving as the competition goes on. He’s been pretty anonymous by his own standards so it’s encouraging to see him being more effective.

Elliot Daly also had a better game, he didn’t seem so shaky at the back.  Watson is one of those guys who improves every time he plays international rugby. He’s very effective, makes yards and shakes off tackles but Jonny May looked like he shouldn’t have started. When 100 per cent fit he’d have run away from Scott Barrett. By playing with a dodgy hamstring he could have ruled himself out of the final.

England can sit back and watch the other semi-final and Eddie will make plans accordingly. Does he play Ford and Owen Farrell again or does he put Farrell back at 10? In the Six Nations against Wales the combination of Farrell, Tuilagi and Henry Slade went pretty well for 40 minutes despite Farrell not really being on song.

With Ford in the mix you enter a more tactical kicking game – if you’re not playing rugby in your half you’re not going to concede many points. With an extra kicker there you can do that, but that’s not to say you can’t bring him on at half-time if you’re winning. I’m intrigued to see which combination Eddie starts with.

Against South Africa I think he’ll be looking to Tuilagi and Slade in the centres because of the bigger runners in the Bok backline – Handre Pollard, Damien De Allende and Lukhanyo Am.