Dan Robson on track to go distance with Wasps

Posted on 10th August 2017 by admin in Featured, Premiership 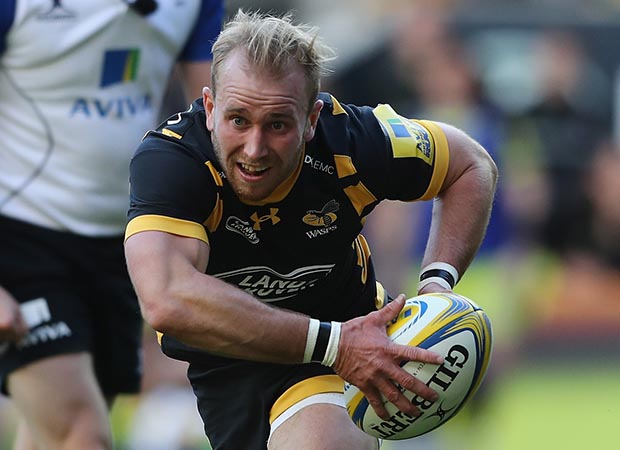 Wasps scrum-half Dan Robson says he will push the boundaries of endurance in an effort to overcome last season’s double dose of disappointment and force his way into England’s reckoning for November’s three-Test series.

Robson, 25, toured South Africa with the Saxons last year and enjoyed a fine campaign for Wasps, but the all-action pivot was surprisingly overlooked by England boss Eddie Jones for June’s tour of Argentina, with 19-year-old Exeter tyro Jack Maunder selected instead.

Coming hard on the heels of a heart-breaking Premiership final defeat to the Chiefs in May, Robson could be forgiven for feeling dejected. Instead, he has come out fighting and is determined to show Jones why his claims can no longer be ignored.

Robson told The Rugby Paper: “I’d be lying if I said I wasn’t disappointed about not going to Argentina. It had been an up and down season, pretty tough at times, but towards the end I was back to my best and had the hammer down.

“But that’s Eddie’s choice and there’s not much I can do about selection apart from get back to Wasps and crack on. We’ve been back a month or so now and everything’s stepped up a gear this year, so if there’s another 10-20 per cent I can squeeze out to show Eddie that I’ll put the maximum effort in to get that first cap, I’ll do it.

“Eddie rang me about the tour and we had a good chat. It was all pretty positive and I know what I’ve got to do, so it’s actually been an advantage to have a full pre-season now and I’ve been able to set my targets and know where I want to go.

“Everyone wants to play for England, you dream of it growing up, and Eddie wants people who are desperate to do that.

“I’ve been able to get my head down at Wasps and, speaking to Dai Young and the coaches here, there’s a good chance to step up and be a leader this season so it’s going to be massive for my personal development.”

After captaining Wasps to victory in last week’s Premiership 7s, showing an impressive turn of pace in the process, Robson explained how additional sprint and endurance work under the guidance of former Great Britain sprinter Darren Campbell, right, is helping to progress his game towards those international standards.

“I’ve been working very hard on my pace and I’d say I’m way quicker than I was a couple of years ago – and over longer distances as well,” said Robson.

“A few years ago I had pace over an initial 10-15 metres but then burnt out a little bit, but I’ve worked hard on that finishing distance over 50 metres and I definitely feel I’m up there with the top guys now, as you saw in the 7s.

“Darren comes in twice a month and one of our strength and conditioning guys, Tristan Bevan, is an ex-sprinter as well, so we hammer the endurance stuff pretty hard with lots of drills and it’s been fun taking those running skills into games.

“With the backline we’ve got, pace is a huge part of what we do and as a scrum-half it’s my job to keep up with guys like Christian Wade, Josh Bassett, Elliot Daly and Willie Le Roux to ensure we keep our attacking game moving on.”

Robson reckons that coming so close to claiming  the Premiership trophy before it was snatched from their grasp by Exeter in extra-time, having earlier led by three points with 30 seconds of regulation time remaining, has only fired his team’s ambition to mount the winner’s podium this time.

He said: “It was a pretty bitter pill to swallow at the end of last season losing the way we did, but in the long run it’s going to do us the world of good.

“Sarries have been through losing finals, Exeter too, so we’ve got to take that experience now and really push on. You can feel it already in the last few weeks that there’s a different atmosphere around the club and the boys are all excited.

“It showed the intent of the club that we put out a strong squad in the 7s last week and we want to go out and win things this year. We saw the 7s as a great hit out, it was an honour to captain that side and, hopefully, we can take that fighting edge into the season.

“There’s no point hiding our ambitions this year, as a playing group we’ve got to push ourselves a bit further and go harder and harder. Then, if we’re in that position of leading a final again, we’ll know what do to come out on the right side of the result.

“Exactly the same applies in Europe. We got out of our Pool last season but then didn’t really show up at Leinster in the quarter-final, so if we want to be a top side domestically and in Europe, we’ve got to perform every week and that’s what we’re aiming at.”

With Daly also demonstrating his versatility by featuring on the wing for the Lions and England, Robson is drooling at the possibilities.

He added: “One of our strengths last year was we were pretty clinical, with 89 tries in the Premiership, and bringing in these guys adds to that.

“As a scrum-half you can only be excited by that and for Elliot to come back in having started three Lions Tests and done as well as he did, hopefully he’ll pass on that experience and help take an already potent backline to a new level.

“Juan adds to our midfield options and if Dai needs to mix things up or rest people, he can.

“If we all work hard, it can be a fantastic season.”