Posted on 20th April 2017 by admin in British and Irish Lions Tour, Featured 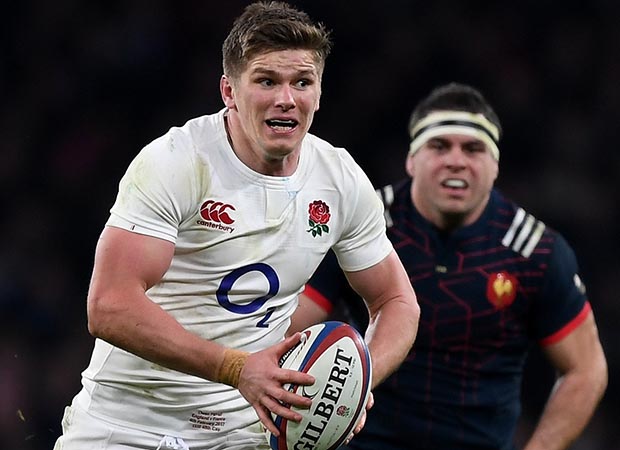 McCaw, a double World Cup-winning captain, was on the wrong end of Farrell’s boot when the All Blacks went down 38-21 to England at Twickenham in December 2012.

Farrell was only winning his 12th cap that day, as he scored 17 points, but has now racked up 53 Test appearances for England and the British and Irish ions and 603 international points.

Farrell is a certainty to be named in the Lions squad on Wednesday for the tour to New Zealand and McCaw sees eerie parallels between the Englishman and Carter.

Twelve years ago Carter was on top of his game as he helped decimate the Lions 3-0 and scored 33 points in a second Test tour de force in Wellington.

And McCaw thinks Farrell is developing into a similar player thanks to England head coach Eddie Jones.

McCaw said: “He looks a lot more comfortable directing things and he’s been given that better service. Where Eddie has been good is that he has given them a bit of confidence in how they want to do things.

“Dan played No.12 until six months before the Lions and he swapped to 10.

“He wasn’t just a kicker he had everything to his game – a real threat – that is what changed things. His defence, his running game and his kicking were all good.

“You’ve had players over the years who had two out of three or three out of four of those things but he pretty much had a good handle on all of them.

“He looked like he had a lot more time, perceived or real, than, perhaps, in the past.

“The English have benefitted from getting some good front-foot ball and using a guy like Farrell. His confidence has grown like Beauden Barrett’s and he is starting to believe in what he can do and directing things pretty damn well.”

Former flanker McCaw, who retired in 2015, stacked up 148 international caps and played the first two Tests against the Lions in 2005 before missing the third through injury.

The All Blacks ran riot in the series scoring 107 points to 40 but, surprisingly, McCaw reckons it was some of the toughest rugby he has played and there will be more of the same this time round.

He added: “In 2005 that second Test, even though the scoreline was 48-18, I took a long time to recover from. I missed the third through an injury but that was a tough match. There was a fair bit of respect and people have seen them win in Aussie four years ago and know it’s going to be exactly the same.

“People still hugely respect what the Lions stand for and the supporters. People talk about how good the supporters are – they had a hell of a time and made a great atmosphere at the games.

“If you look at it from a purely rugby point of view with the potential they had did they do what they could have? Maybe not. They were still pretty tough games although the scoreline might not suggest it.”

McCaw is now flying helicopters in New Zealand and was involved in the relief mission to help earthquake victims last November but is adamant he finished playing in the nick of time.

“I am not saying I don’t miss things that go with it but I have got no regrets about finishing,” he said. “I enjoyed it but I knew it was the right time to give up.

“I miss that thrill of running out but now, when the final whistle goes, I think it’s quite nice to be sitting in the lounge and not feeling beaten up and sore.

“I’ve always thought you have got to look forward you can’t look back. I have been lucky to do a few cool things and get into a bit of flying. It has not been too bad.

“Another thing that helped me move on is that my good mates who I went through a lot of rugby with all moved on at the same time. It is not as if you are hearing from the guys who you are quite close with what you are missing out on. That helped in a way.”

*The Richie McCaw Story: Chasing Great is available on digital and DVD