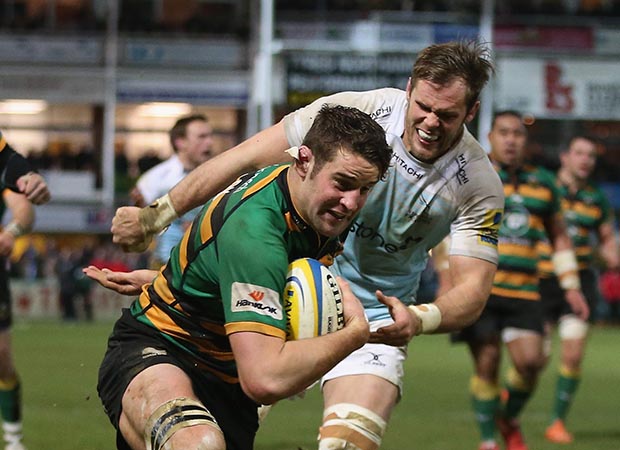 Calum Clark insists his days of worrying are over and he will let his performances  do the talking as he seeks an elusive first cap and a place in England’s World Cup squad.

Clark, infamously banned for 32 weeks in 2012 for breaking the arm of Leicester’s Rob Hawkins in that year’s LV= Cup final, has fought his way back  from that personal setback to be part of Stuart Lancaster’s thinking ahead of September’s global gathering.

A permanent switch from blindside to openside flank worked wonders for Clark at Northampton last season and, after taking inspiration from New Zealand legend Richie McCaw, the 26-year-old now feels ready to step up his claims to be included in England’s final 31.

Clark told The Rugby Paper: “On a personal level I made some really good improvements last season and got selected in the autumn and Six Nations squads, which was really pleasing.

“So this camp now is about advancing my case further in the eyes of the selectors.

“I can’t control selection, all I can do is make myself better, so it’s pointless worrying about what they’re thinking.

“I’ve done that enough times, being in camp and worrying about selection, and it just detracts from your experience and how you work in training.

“I can’t afford those distractions when selection is so tight and everything’s on the line. We go to Denver this week where it’s going to be intense, but hopefully I’ll enjoy it and it’ll be a great chance for everybody to be focussed away from the distractions at home.”

At 6ft 4ins and weighing in at over 17st, Clark is far from being the traditional No.7 groundhog, as typified by Australian trio Michael Hooper, David Pocock and George Smith, whose more squat, lower centres of gravity make them harder to shift over the ball.

But Clark counters: “No.7 suits me best and I like to get that fitness element into my game with as much running as possible and getting to things first. Moving to the openside has been beneficial to me and I feel my lineout work offers a real point of difference.

“I’ve always felt like a No.7, even from my early days at Leeds, but sometimes your body doesn’t fit the image of what a traditional openside is.

“But I think I can still do the job of a Hooper or Pocock and really compete for the ball, while offering other strengths.

“I study Richie McCaw a lot and he’s not that classic shape either. He’s a lot taller (6ft 2ins), but Richie’s probably the best there’s ever been in the position and, as far as I’m concerned, there’s no one better to watch and learn from if you’re going to play at the highest level.

“Mentally, Richie’s exceptionally strong and he’s able to stay in the present and pick his moments when to compete for a ball or when it’s right to run a line or effect a certain type of tackle.

“He understands what it takes to win games in any circumstances and although I’ve never played against him, that would always be one of my dreams in rugby.”

Clark might have fulfilled his ambition of facing McCaw on last summer’s tour of New Zealand, but he was omitted from England’s squad despite helping Northampton to their first Premiership title – a further career setback that he admits left him despondent.

“I was sat on a plane going on holiday when I really wanted to be on the plane to New Zealand,” Clark said. “That didn’t sit right with me and, personally, I don’t want to feel like that again because being around this England camp means so much to me.

“I don’t want to be in a position again where all my Northampton teammates are involved and I’m not, so hopefully I can make an impression and advance my cause in the right way over the next few weeks because my ultimate aim is to be at the World Cup.

“I want to make the best of my opportunity to play rugby at this level. We’re extremely privileged people who are in an unbelievable position to be able to do this, so you get one crack at it in your life and I’ll do my utmost to make it into that squad.”