Posted on 7th May 2015 by Nick Verdier in Featured, HSBC Sevens World Series 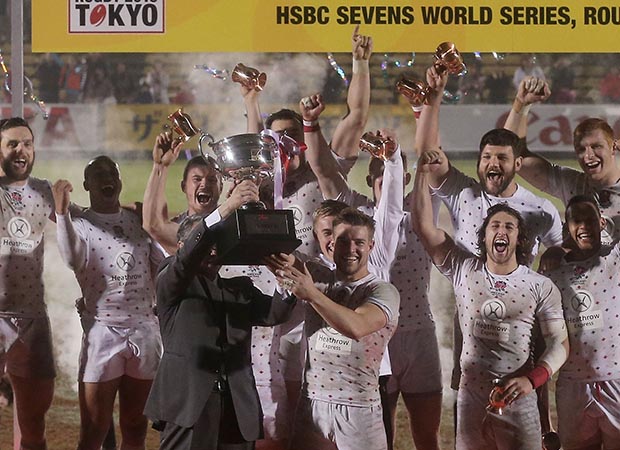 England Sevens captain Tom Mitchell has warned their World Series rivals that, having been good enough to win in Tokyo last time out, they will be in much better shape for the last two legs of the season in Glasgow and London.

After a difficult start to the campaign in Las Vegas in February, England travelled to Asia for the Hong Kong and Tokyo tournaments with the fit-again Phil Burgess, Dan Bibby, Marcus Watson and it paid off.

Despite losing in the plate semi-finals in Hong Kong, Simon Amor’s men went on to win their first tournament since Wellington in February 2013 when they beat South Africa 21-14 in the final in Japan.

But Mitchell reckons the experienced trio will feel more confident now than they did six weeks ago on the back of a full training block.

“After Tokyo everyone has been keen to get stuck in and work even harder so if anything we’re in a better shape than when we won that tournament,” he told The Rugby Paper.

“Phil, Dan and Marcus came back for the last two tournaments but they weren’t match fit after being out for so long. On paper we had some big names in the squad but in reality those guys will feel a lot more comfortable going into the next two tournaments rather than Hong Kong and Tokyo.

“They’ve had the opportunity to put in a full block of training this time so they’ll be even stronger in Glasgow next week.

“For the first time in a very long time we’ve been lucky to have a fully-fit squad training which gave Simon the opportunity to pick from the full roster which has not been the case all season.

“We enjoyed finally winning a trophy but coming back for our two home tournaments we don’t want to end the season badly. It’s been a very productive few weeks for all of us and we’ve made sure we’re ready to finish on a high.”

A key factor behind England’s success in Tokyo was their new-found effectiveness at the breakdown which allowed them to control possession much better.

England have always been feared, ball in hand, because of flyers like Dan Norton or Watson out wide and often reached the Cup semi-finals.

But against New Zealand, South Africa or Fiji, they struggled in the contact area and were never able to utilise their blistering pace to its full potential.

That all changed in Asia last month and Mitchell reveals it was the result of some targeted training since the New Year.

He added: “There were a few things that worked really well for us in Tokyo and one of these was the breakdown. We identified that we weren’t as strong as we could be in that area and we needed to work on it. Our ball retention wasn’t as good and we felt as if we couldn’t fire on all cylinders in attack because of it.

“We know we have a lot of pace in attack but looking after the ball is vital if we want to put ourselves in the best position.

“Sevens is a game were you tend to get isolated in attack so you’ve got to make sure the first player coming to clear out is spot on with his technique. That’s why it’s become a vital part of the game because teams identified that as an area to attack and get turnovers in defence.”

Winning the seventh tournament of the season handed England 22 points which, coupled with Australia’s failure to reach the Cup quarter-finals, propelled them into fourth place in the overall standings – the last direct Olympic qualification spot.

They will now go into the last two tournaments of the season sitting nine points clear of Australia but Mitchell is adamant England, who prepared with a full contact session against Wales on Thursday, will not rest on their laurels in front of their own fans.

He said: “We saw what happened to Australia in Tokyo so you can’t expect to cruise into tournaments and do well because you did well the previous tournament.

“We’re in a good position regarding the Olympic qualification but things can turn quickly in Sevens. We’re coming back to the UK after a long season and we want to make sure we do our best.

“We’re confident we’ve done our preparation well and, if we go through our processes correctly, things should go well for us.

“We haven’t focused on the Olympic qualification all season so we’re not going to start now. We’ll do our best in these last two legs and see where we stand once the series is done and dusted after the London tournament in two weeks’ time.”