Posted on 11th March 2015 by admin in Featured, Premiership 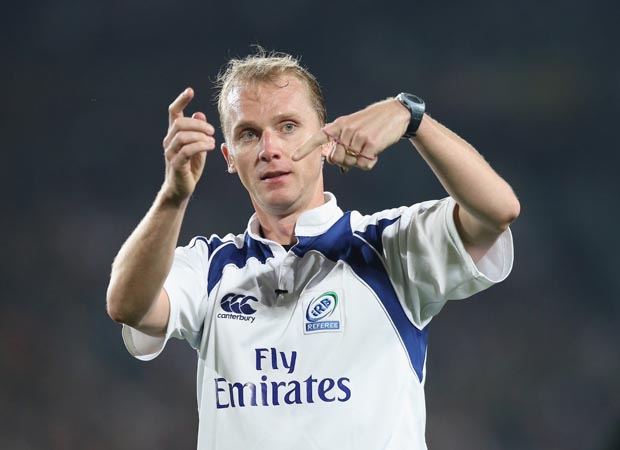 Top referee Wayne Barnes is receptive to the idea of stopping the clock at scrums, lineouts and when tries are scored in order to prevent fans being short-changed.

Reset scrums and lengthy time-wasting tactics at lineouts are blights on the modern game, with a Rugby Paper survey revealing that over 30 minutes of match time were frittered away during last week’s Aviva showdown between Exeter and Bath.

The game’s 16 scrums took more than 20 minutes to complete, at an average of 77.1 seconds, while lineouts accounted for another 10 minutes-plus. Barnes insists ‘ball-in-play’ time has improved in recent seasons but agrees more could be done.

He told TRP: “Ball-in-play in the England v Ireland game was 40-minutes, which used to be unheard of, so that’s great. But I also understand the frustration of players, coaches and fans where scrums go to the floor and it takes 40-50 seconds to reset it.

“Safety’s paramount and we can’t decide how teams want to play, all we can do is referee the law. But the idea of stopping the clock at resets is something we can easily discuss – stop the clock, stand up, then put the clock on when the scrum begins again.”

Barnes added: “There’s also been some discussion in Sevens about stopping the clock when a try is scored and not restarting it until the kick-off. That could save another 90 seconds and lineouts could be looked at, too.

“We haven’t really discussed any of those things but I think they have merit. We’ve got stadium clocks, something we have control over that football doesn’t, and we should always be looking at ways to keep ball-in-play time up.

“For fans, there’s nothing worse than seeing a game that becomes stop-start.”

Barnes refereed his 150th Premiership game at Bath on Friday night, only the third official to reach the mark after Chris White and Dave Pearson.

He said: “Bath v Rotherham was my first game in November 2003. We had a punch-up, a streaker and an ambulance on the pitch after someone had a heart-attack, so I thought, ‘this is going to be an eventful career!’”

Barnes received death-threats from irate New Zealand fans for his officiating of their team’s 2007 World Cup quarter-final defeat to France.

He admits: “I was 28 and of course you reflect. It does knock you and nobody wants to be criticised in public, let alone in a national parliament!

“But, like players and coaches, you learn from those experiences and I’ve refereed some phenomenal matches involving New Zealand since then.”

His chances of refereeing this year’s World Cup final depend on England, but Barnes adds: “It’s the pinnacle, but you want England in the final.”