Home / Featured / Runaway train Sinoti Sinoti is not slowing down

Posted on 5th March 2015 by admin in Featured, Premiership 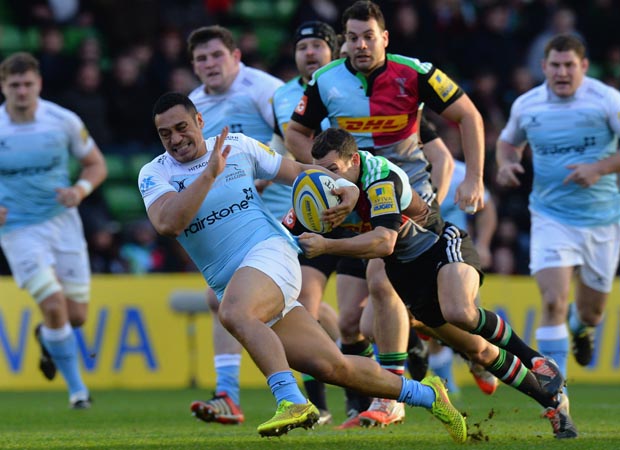 Sinoti Sinoti, he’s so good they named him twice. It’s a line used before but has never been more apt.

Newcastle’s Samoan winger has had a sensational season, topping the Premiership charts in the defenders beaten and metres made categories and scoring six league tries along the way.

Not surprisingly the 29-year-old has become a real favourite among the growing throng of Falcons supporters – crowds are up by nearly 20 per cent – for his willingness to attack at every opportunity.

Sinoti can look like a runaway train out of control with his unique running style, all hustle and bustle with a jump-step and hip shimmy that mesmerises opponents, but the twice-capped international insists he is a man with a plan every time he receives the ball.

“It looks simple but there are plenty of things going through my head. As soon as I get the ball I’m thinking, what’s the best option for me to take to get the team in the right place to mount the next attack?” he told The Rugby Paper.

“If I need to run just to settle the game down then I’ll pretty much run straight, but I tend to try and get the ball to the middle of the field so we can attack on both sides.

“I don’t like to kick because there are a lot of other boys that can do that. I’ve been caught out a few times when I needed to kick the ball and opted to run instead but luckily the coaches are kind on me.”

Sinoti says his running style was honed on the streets of Wellington, New Zealand.

“Growing up, rugby and sport was all we had to do, there were no shopping malls or anything like that. We used to play in the road any chance we got. Gradually you pick things up in terms of your footwork and you take it from there, it wasn’t like I copied anyone off TV.”

Sinoti swapped one rugby hotbed for another when he left New Zealand for South-west France, where he had spells with Castres and Toulon. But he credits a two-year stay in Italy with Aironi for seeing rugby in a different light.

“I’m a pretty easy-going guy but I used to get stressed out about the game when I was younger, game day couldn’t come quickly enough because that was all I could think about. I was really into my craft, and I overloaded on thinking things through too much,” he said.

“As I’ve matured I’ve learnt to understand that there is more to life and that rugby is just a game, albeit a game I really enjoy.

“I think the two years I spent in Italy really opened my eyes and chilled me out a bit. My partner and I really embraced the culture and visited lots of different places.

“I know that I haven’t got long to play so I thought I’d just express myself a bit more and really enjoy my rugby and obviously it’s worked in my favour.”