Home / Featured / Why Maro Itoje’s rugby is improving by degree

Why Maro Itoje’s rugby is improving by degree

Posted on 5th February 2015 by admin in Featured, Premiership 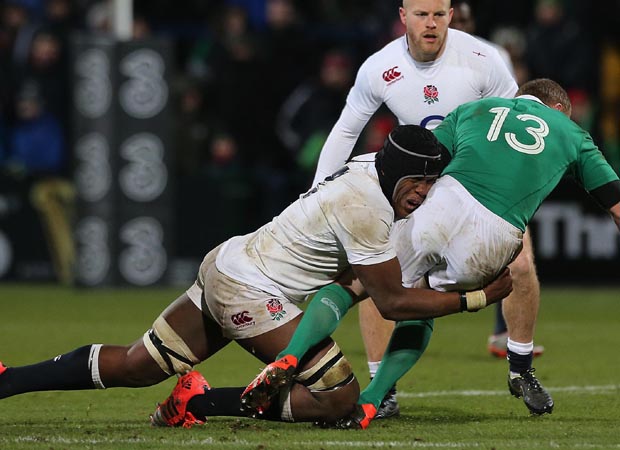 Maro Itoje had to put political studies on hold to help out England Saxons in Cork on Friday evening.

England’s U20s World Cup-winning captain is determined to finish a three-year, full-time degree besides making his way in professional rugby.

His working week is split between training at Saracens and life as a student at London’s School of International Studies.

“It all depends on whether I’m playing the next weekend as to what I do,” explained the 19-year-old who did not want to do a part-time degree which could take him up to six years to complete.

“If I’m playing I’ll stay with Saracens, but if I’m not involved they allow me to go to university and come in and out.

“I have eight hours a week when I have to be at university – it just depends when I’m playing next,” he said. “I have to prioritise my time and sometimes have to get my head down to get the work done.” Before he travelled to Cork, he was completing his latest essay on the history of the Atlantic slave trade.

He is increasingly becoming a regular member of Saracens’ main squad, having featured two weeks running as a substitute in European Cup games.

England Saxons coach Jon Callard has no doubts that the 6ft 5in lock or flanker will be a key England player of the future.

Callard said: “He’s a very, very impressive young man. He understands the game and his work ethic is amazing.

“His future is very, very bright.

“You have to drip feed the experience into him and Saracens are doing it very well. This is just another step (the Saxons game) in his evolution.” Meanwhile Callard has made a plea to schedule more A-team internationals.

The Saxons are only scheduled to play Irish Wolfhounds this season and the former international believes that is not enough.

A formal A-team Six Nations has been disbanded because of the huge demands on players while summer tours are also expensive to stage.

Callard said: “It’s a shame we are not playing more games. But it’s hard to see how we can get these games in with the fixture list the way it is.

“The A games are the next level up and they are a great test of where players are. But I’m not going to get into the politics of the situation.

“We would love to play more games but it would have to be in association with the clubs for the release of the players. It’s tough for clubs at this stage of the season.

“There is also the U20s competition at the same time as the Six Nations and that deprives the clubs of those players for the Premiership or LV= Cup games.

“I’d like to think there would be some new suggestions in the next heads of agreement between the RFU and clubs.

“What it comes down to is negotiation between club and country. We can’t do our own thing – we have to work in partnership. I’d love to think there’ll be suggestions to resurrect some kind of format for the Saxons.”