Home / Featured / Calum Clark will not give up until he has earned that No.7 jersey

Calum Clark will not give up until he has earned that No.7 jersey 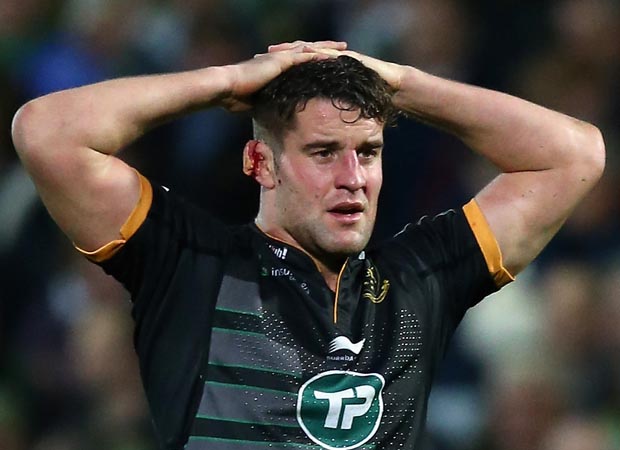 Calum Clark knows he faces a battle to oust Chris Robshaw from the England team.

But Northampton’s combative openside reckons he is in the form of his life and is doing everything possible to win his first England cap.

Clark has fought back superbly from a miserable 2012, when he was handed a 32-week ban for breaking the a

rm of Leicester’s Rob Hawkins in the LV=Cup final.

But he confronted his inner demons and is reaping the rewards with a place in England’s senior training squad.

A change of position has been instrumental in Clark’s revival, too. Of his England call, the former blindside flanker said: “It’s good to get recognition. I’ve worked extremely hard this season and feel I’m improving.

“There’s lots of different areas, but I think I’ve found my position at No.7 and I’ve been given a lot of opportunities for Saints.

“Being a No.7 is naturally more my sort of game. I’m a bit taller than your classic openside, being well over six foot and a lineout option, but having that in my armoury is a bonus on top of all the other stuff and it’s where I’m finding my feet.

“People can make their own minds up about me and what they feel has improved in my game, but I’ve seen some results I’ve been pretty pleased with.

“I’m not sure I can express what it would mean to wear that senior England shirt, but it’s what I’ve dedicated my life to. There have been ups and downs, big highs and lows, but for myself and all the people who’ve supported me it would be huge.

“Having started out at Stockton and Darlington, there’s a lot of guys up there interested in seeing how things are going and it’s nice to have that support.”

In the aftermath of his inexplicable injuring of Hawkins, Clark sought help from renowned sports psychologist Steve Peters. “It was about taking a look in the mirror. I learned a lot from Steve and have improved my discipline a lot,” he said.

One yellow card in the last two years is testament to that and both Clark and Saints are feeling the benefits. The challenge now is to get past Robshaw.

Clark said: “I can’t search for things out of my control, all I can do is get my game better, improve further.

“I can’t let not getting picked ahead of anybody else affect my focus and my desire to better myself. Regardless of getting picked or not, I must still kick on.”