Home / Features / Premiership play-off race going down to the wire

Premiership play-off race going down to the wire 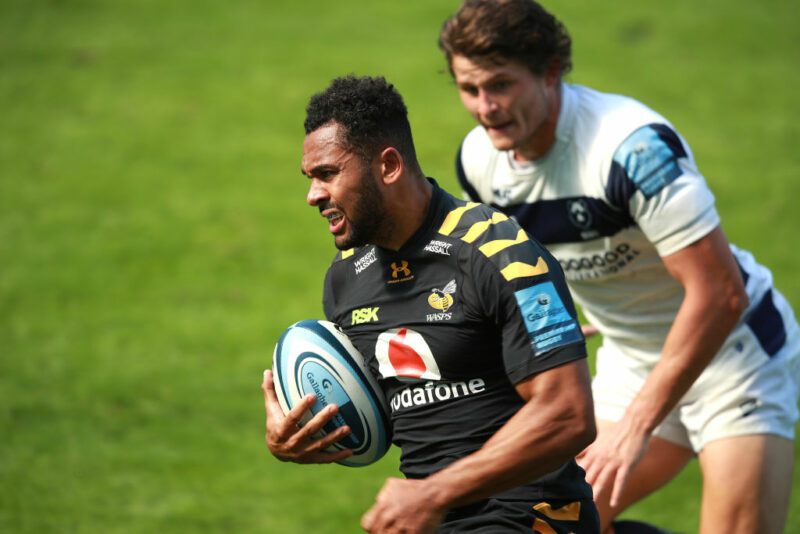 THERE was a time when it seemed as if the ‘Pandemic Premiership’ might never be restarted, let alone completed. Yet, with five clubs in the hunt for four play-off places – one of which has been claimed already by an Exeter Chiefs squad nominated by many as the Premiership champions-elect – this chronically interrupted season has somehow contrived to produce a cliffhanger of a finish.

Although the Chiefs are unassailable in first place on 73 points after their five-try 35-22 bonus point victory over Gloucester at Sandy Park in Round 19, there are just six league points separating the other four contenders, Bath, Wasps, Sale and Bristol, with only two games to play for most clubs.

There is a Rubik’s Cube of permutations in any predictions of who will claim the other three semi-finals slots, not least because Bath, who are second on 65, have played one more game than Wasps on 61, and also one more than Sale and Bristol, both on 59.

We were given a preview of just how fraught the run-in could be in Tuesday night’s west country derby at The Rec, when Bath were trailing eighth placed Gloucester 20-3 on the hour.

With their play-off hopes 20 minutes from being trashed, Bath were transformed into a side which found the urgency and focus to score four unanswered tries in the final quarter to claim a bonus point life-saver.

However, Bath’s play-off hopes are still in the balance as they face a last round trip to Saracens at Allianz Park in what will be Sarries last chance to send their triple European Cup-winning skipper Brad Barritt, and other epoch-making performers like Richard Wigglesworth into retirement in style in their last Premiership appearances for the club.

Bath – ones to watch

If hooker Dunn is Bath’s bludgeon, then scrum-half Spencer is the team’s rapier. Dunn has been knocking on England’s door for a couple of years, and given his power not only in the scrum, but at close quarters, he looks capable of knocking it off its hinges. Dunn has mauled his way to six tries this season – including two in Bath’s all important late charge against Gloucester this week.

Spencer has also made a clear statement about his England credentials since joining Bath from Saracens. He has given them a new attacking dimension with his pace and all-court game, scoring four tries in seven matches for the club, with the most recent the bonus point try against Gloucester. Spencer is already a core component in Bath’s blueprint.

A win would give Bath a play-off place, but given that landmark moment for what Saracens boss Mark McCall has described as two club legends, it would be unwise for Bath to underestimate Saracens’ resolve. Just ask Leinster.

What will make Saracens even more problematic is that due to their salary cap relegation they will not have the distraction of competing in the Premiership play-offs for the first time in a decade.

In the weeks since the mid-August restart the four clubs chasing Exeter have continuously leapfrogged each other, and with the margin for error narrowing with every round it has turned into an engrossing battle.

Wasps are the wildcard because, Exeter excluded, they have made the biggest gains since the restart, winning six of their seven matches since lockdown – and nine out of ten since Lee Blackett took over as head coach from Dai Young in February.

However, they also have the toughest schedule going into the play-offs with a trip to Harlequins tomorrow, and then a final-round home face-off against Exeter, with all fixtures kicking off concurrently at 3pm next Sunday.

The way Wasps rattled off two consecutive bonus point half-centuries against Leicester and a second string Bristol earlier this month, showcased a supercharged counter-attacking capability – but they are unlikely to find Harlequins, or the league leaders, quite so accommodating.

Wasps – ones to watch

West was a school mate of Bath’s England tighthead Will

Stuart, and when they came face-to-face last month at The Rec the loosehead not only gave the Wasps scrum the edge, but backed it up with his first Premiership try in a battling away win. West, who was also in the spotlight for refusing to switch to hooker, illustrates the new front row depth Wasps have built, with Ben Harris and Simon McIntyre as competition for the No.1 shirt.

Willis is a match-winner, with the new breakdown laws – which allow for a fairer contest for the ball – playing to his remarkable flexibility and grappling strength. The Wasps flanker’s 41 turnovers this season, double that of his nearest rival, have been crucial in unleashing his side’s attacking threat.

Wasps may have relocated to Coventry from London/High Wycombe five years ago, but it has not doused their long-standing rivalry with Harlequins, who will be emotionally charged in the same way as Saracens, given that it will be Chris Robshaw’s last match at The Stoop.

Robshaw has been a talisman for Quins, and his team-mates will want to send the former England captain on his way to California, where he joins the San Diego Legion, with a result to remember – and raining on Wasps’ parade will do nicely.

However, Harlequins will face a Wasps side who know that a win of any sort will put them level with Bath (on 65), and that with a points differential of 52 more than Stuart Hooper’s side they will be well placed to go second before the last round.

Much will depend on whether the Quins motivation to give Robshaw a 21-gun salute is sustainable in an empty stadium against a Wasps crew hell-bent on getting another tilt at a Premiership title.

It was interesting to hear Wasps veteran Jimmy Gopperth’s recent appraisal of how the lack of fans in stadiums impacts on players. The Kiwi fly-half said: “It’s a lot different on the emotional side. The crowds really get you pumped. I’m pretty relaxed usually, and now, without the crowds, I’m really relaxed – but the crowd noise excites you as a player.”

Victory at The Stoop would give Wasps some insurance going into their last game against an Exeter outfit which will be fighting on two fronts, and possibly resting players ahead of their Premiership play-off on October 11/12 and European Cup final on October 16.

By comparison, on paper Sale and Bristol face a less exacting route to the play-offs because both are playing clubs in the lower half of the league.

This is offset in both cases by a fatigue factor which could come into the equation with each club facing a short turnaround between their last two fixtures.

Sale have a potentially awkward Tuesday night trip to Northampton before signing off at home against Worcester, while Bristol have only a three-day break between their Wednesday evening match against Leicester at Ashton Gate before finishing their regular-season campaign against London Irish at the Madejski stadium.

Sale Sharks – ones to watch

De Klerk is a big game player who showed with his try from a blindside break against Harlequins to clinch the Premiership Cup for Sale this week what a brilliant opportunist he is. The Springbok scrum-half is a combination of combative and tactically street-smart – but the tactical kicking that was so significant when South Africa won the World Cup a year ago has been more hit-or-miss for his club, and needs a quick polish if they are to progress.

Tom Curry also returned from the World Cup with his reputation as an openside flanker off the charts. The England No.7 has had a stint at No.8 since then, and after moving back to the flank he has played well – but Sale need him to hit that world-class button again.

Given their form since the restart, there is little doubt that both Sale and Bristol have the firepower to finish with two bonus point wins, which would take their final tallies to 69 points. By the same yardstick Wasps would finish on 71, and if Bath beat Saracens with a bonus, they would be on 70.

Sale had what looked like a disadvantage in a congested race for the finish by playing an extra fixture this week, when they faced Harlequins in the Premiership Cup final at the AJ Bell – but it may yet prove to be the ideal pick-me-up. Their 27-19 win saw Sale lift their first silverware for a decade, and while this is not one of this sport’s big prizes, it was a timely confidence boost.

The two late tries by Springboks Dan du Preez and World Cup winner Faf de Klerk also showed when it comes to knock-out rugby their South African contingent are capable of going up a gear – as are the Curry brothers, Tom and Ben.

The same can be said for Bristol, thanks to the attacking x-factor introduced by Semi Radradra and Charles Piutau, and augmented by three more lethal, but relatively unsung, line-breakers in Luke Morahan, Piers O’Conor and Max Malins.

Bristol Bears – ones to watch

Luatua arrived at Bristol with a reputation as an All Black who blew hot and cold, but the tall blindside flanker has been the bulwark of this Bristol side, leading from the front. Luatua is a tremendous lineout forward, but it has been the consistency of his all-round workrate and performance which has been unrivalled in the Premiership this season and made him an inspirational figure.

Earl has been like a firecracker since he joined on loan from Saracens, sparking Bristol’s counter-attacking game with the quality of his tracking runs, support play and agility. It has set him apart as an attacking openside – and earned him joint second place in the Premiership Most Tries chart with ten.

Bristol’s head coach is that his team have the worst points difference of the contenders.

Where Exeter are plus 231, Sale 171, Wasps 115, and Bath 63, Bristol are only plus 38. This inevitably leaves them vulnerable if they finish on the same league points as one of their rivals next Sunday.

What will also make those chasing Exeter vulnerable is if they are found to have an Achilles heel up front. What makes the Chiefs so formidable is that they can pick two packs of near identical strength to keep their opponents under sustained pressure.

Since the restart, the clubs that have shown they could have the forward depth to live with Exeter are Bath and, more surprisingly, Wasps – whereas if Sale and Bristol have to go to the bench there is more of a gap between their starting pack and their understudies.

Despite Bristol’s acquisition of Kyle Sinckler neither their front five, nor a Sale unit which has lost the services of Lood de Jager, are as punishing as a Bath pack in which hooker Tom Dunn has emerged as a force of nature, and lock Josh McNally a very handy acquisition.

However, where Bath’s forward edge over Sale was emphasised by their 37-22 away win over Sale a fortnight ago, they were in turn stumped by an unsung mix-and-match Wasps pack that carved out a 27-23 win at The Rec four weeks ago.

Forward strength is what usually wins titles, and given that yardstick is as good as any when it comes to making predictions in such a close field, it is Bath, Wasps and Bristol –specifically because they finish with games against tail-enders Leicester and London Irish –who will join Exeter in the play-offs, and Sale to miss out.