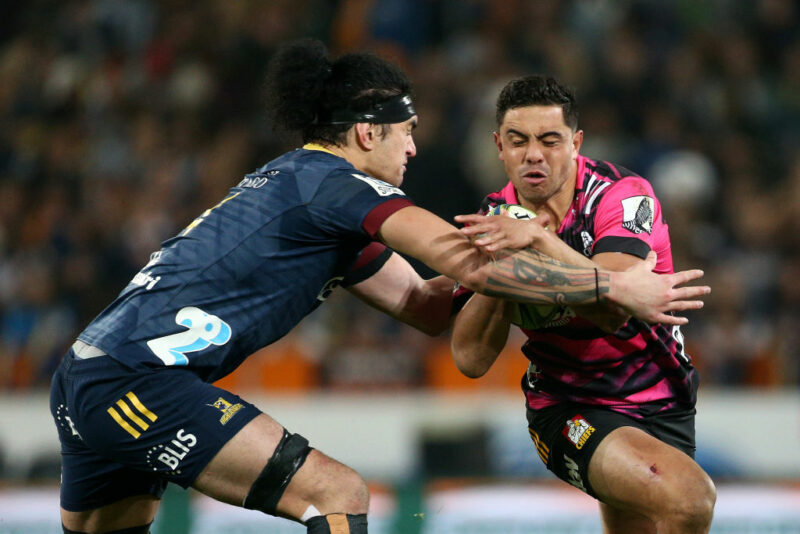 A late Bryn Gatland drop-goal snatched victory away from the Chiefs as the Highlanders celebrated a 28-27 victory on Super Rugby Aotearoa’s debut.

The return of rugby in New Zealand came with no restraints after three months in limbo, with a streaker even finding time to make an appearance on the pitch at the Forsyth Barr Stadium.

New rules at the breakdown will be caused for much debate as referee Paul Williams dished out 15 penalties in both halves of the match.

The sound of the whistle unrelenting as rugby’s tardiness around the breakdown became apparent, and left the onus on players and coaches to clean up their act.

Despite the stop-start action, the Highlanders came through the first half with a 22-16 lead and did so after having wing Jona Nareki and full-back Vilimoni Koroi sent to the sin-bin.

Had it been a member of the Highlanders pack who were shown yellow, the first half may have been a different story as the hosts asserted themselves through their forwards.

Highlanders captain Ash Dixon hit his target at the lineout and benefitted from the resulting maul to score the first try of the contest.

The hooker was joined on the scoresheet by teammate Patelesio Tomkinson, who combined with centre partner Rob Thompson to extend the Highlanders’ advantage.

It was perhaps a little harsh on the Chiefs to be tryless to that point, with only two penalties from full-back Damian McKenzie on the board, as the Highlanders held a 15-6 lead.

Their attacking intent bore fruit with the try of the match coming shortly before the half-hour mark, the ball working its way through ten players before Sean Wanui capped off a remarkable team try.

McKenzie added a penalty to his successful conversion attempt moments later, as the penalty count began to stack up.

No.8 Marino Mikaele Tu’u punished the Chiefs for not making their man-advantage count after Koroi was shown yellow for a tip-tackle on Naitoa Ah Kuoi.

Highlanders working the blindside following another maul, where fly-half Mitch Hunt fed Tu’u to dive over.

A slower second half found time for drama in the final ten minutes, after McKenzie and Hunt had exchanged penalties.

Chiefs were brought back into the contest with scrum-half Brad Weber switching the direction of play to the blindside where McKenzie passed out wide to Anton Lienert-Brown to score the 10th try of his Super Rugby career.

McKenzie made amends for missing the conversion by slotting a drop-goal on 78 minutes to give the Chiefs the lead for the first tie in the match.

A moment which drew little reaction from Chiefs head coach Warren Gatland, whose inner delight soon soured into something bittersweet as son Bryn, on as a replacement for the Highlanders, dropped the match-winning drop-goal from almost 35 metres out to clinch it for the hosts.

The younger Gatland revealed after his match-winning cameo: “I had dinner last night with him [Warren] and mum and halfway through got a text that I was on the bench. I didn’t want to give the game plan away.”

“He’s done that a few times,” Warren Gatland added after the match. “He did it for Hamilton Boys and down here for North Harbour. I suppose if anyone was going to do it it was going to be him in that situation. I’m not happy we lost the game, but well done to him.”